This question, one of the most famous asked in a Broadway lyric, raises the curtain on “Rent“–Jonathan Larson’s theatrical hit inspired by Puccini‘s “La Boehme“. Recently audiences in and around Fullerton California had a chance to experience the magic of this winner of both the 1996 Pulitzer for drama as well as the Tony Award for “Best Musical”, as Fullerton College Theater Arts presented this odyssey into the lives of young bohemian artists, addicts, and other denizens of the Big Apple’s infamous “Alphabet City” area.

Word is, early on investors in the first workshop production weren’t too pleased by the title and tried to convince writer-composer-lyricist Larson to change it; that is until he explained that “Rent” actually has a double meaning– referring to the daily battle to keep a roof over your head, yet also being a way of saying “torn apart”. Drawing jolting parallels between the epidemic of Tuberculosis in early nineteenth century Europe to the AIDS crisis of the 1990’s, he transposed the action from Paris in the 1830’s to New York City’s East Village a little over a decade ago for this rock retelling of a group of friends struggling to make ends meet even as they struggle to survive. The result is an off-beat mixture of grand opera with more modern offerings like “Hair“, “In The Heights” or “Spring Awakenings”. 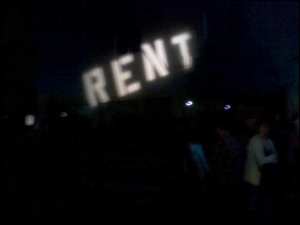 Directed with terrific fluidity by Gary Krinke and choreographed by John Vaughan, Fullerton’s translation began with the cast rising slowly from the orchestra pit on an hydraulic lift to the silky strains of that aforementioned opener, titled “Seasons Of Love” (–really one of those rare melodies that stay with you long after the final bows have taken place, and that’s not a bad thing!) This was possible because the band was figured into the set behind a chain link fence (as seems to be a more and more popular device these days,) part of Scenic Designer Kevin Clowes utilitarian multi-leveled pipe and corrugated-metal take on grimy urban sprawl. 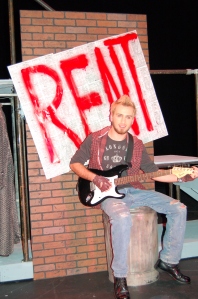 As the two room-mates at the core of the story, Roger, the struggling musician and former junkie, was portrayed by Taras Wybaczynsky, and Brandon Sanchez was his aspiring film-maker pal Mark. Like the rest of the cast, these guys are talented to be sure, but each added an interesting blend of boy-next-door charm with still enough grit to give them the required street-cred. Wybaczynski, in particular, has an exceptional singing ability that was put to fine use; however, his duets with sultry, sexy Shenikah Williams as Mimi, the hapless object of his affection, really made for the most electric moments. Doubtless, the most powerful of which was their rendition of the deceptively gentle-but-deeply affecting “Without You”. Then again, such truths expressed in the lines of that song as well as many others the score boasts–particularly as they pertain to relationships–are probably what’s given “Rent” such an incredible following. (The original played to packed houses on Broadway for 12 outstanding years!)

Other, equally memorable melodies included the moving “Will I Lose My Dignity” expressing the fears of members of an HIV/AIDS support group as they ponder what could happen should their disease ever take a turn for the worse; starting as a frank expression of self-confrontation, it then segues into the more affirming theme, “No Day But Today“ (-later reprised in the finale as the main characters vow to move forward into their futures assured by the love and camaraderie of each other that has seen them this far.)

It’s true that intimate ballads are what gives a vehicle heart, but the production numbers make that heart beat–and in Fullerton’s restaging, the best occurred when Mark unexpectedly meets Joanne (Brianna Roecks) the woman his bisexual ex, Maureen left him for. Discussing their mutual frustration over the frequently flaky antics of the girl, leads them to partner in that most complex of dances–“The Tango Maureen”. Backed up by several couples from the ensemble, Sanchez and Roecks displayed some very calculated footwork (and looked to be having a whole lot of lot of fun doing it!) Likewise, as the flirtatious performance artist Maureen, Stella Kim knocked the audience’s collective socks off. If there was any frustration involved with her performance though, it was that they had to wait until the second act when she and Brianna practically raised the roof with their awesome rendition of “Take Me Or Leave Me”.

Much like its predecessor, “Grease” in 1978, the screenplay for the 2005 film adaptation, cleans up the plot somewhat to make it flow simpler and easier. In fact, in comparing the stage version to its source, one gets the distinct idea that Larson may have followed its dramatic structure a bit too closely. Witness the next-to-final scene involving a seemingly out of nowhere confrontation between Mark and Roger that leads to a ‘diatribe set to music’ titled “What You Own”; although not a bad song, one wonders if Larson incorporated it (and the entire segment itself) because something similar takes place in the classic work he was referencing. Regardless though, such textual blemishes are miniscule when compared to the over all magnificence of the entire piece (for instance, Mimi’s last minute “resurrection’ makes a lot more sense in the context of the play as opposed to that of the movie.)

Fullerton College has a long, laudable history of arts education and production with many notable alumni having “tread the boards” there. Small wonder the theater department has become known for the polished treatments they give each of their shows, and “Rent” was certainly no exception. Overall, the company of student actors never fell short of the demands of some pretty sophisticated material while exhibiting a few genuinely “American Idol-worthy” voices in the process. This may be a junior college but the performances here were definitely far from sophomoric!

(Photos courtesy of “The Hornet” Newspaper)