Stage Adaptation: “Nine To Five”-What A Way To Make A Lively Musical!

That galloping beat, accentuated by the rhythm of tapping typewriter keys is unmistakable–second only perhaps, to the spirited  chorus that proclaims “Working Nine To Five–what a way to make a living“. Now one of the biggest comedies of the 1980’s is one of the happiest musicals today–and its coming to The Segerstom Center For The Arts in Costa Mesa, California.  Based on the hit movie of the same name, “9 TO 5: The Musical” is  a “rages to wishes” success story that touches on one of the most common held (if slightly guilty) fantasies of working people everywhere. Who hasn’t imagined finally getting one up on ‘sexist, egotistical, lying, hypocritical, bigoted’ bosses? Billed as a “hilarious story of friendship and revenge in the Rolodex era”, “9 TO 5” has made the transition from big screen comedy to rousing stage musical thanks to the awesome work of composer-lyricist Dolly Parton and book writer Patricia Resnick who co-authored the original screenplay.

In 1981 Dolly Parton made her movie debut in this–described at the time as an ‘irreverent feminist comedy’, which also starred Lilly Tomlin, Jane Fonda and Dabney Coleman. What many remember most about the film is that, perhaps for the first time in motion picture history, it really drew attention to the plight of office workers everywhere–and got its bitingly true message across through laughter.  Likewise, what started out as aimed primarily to a female sensibility, actually made a statement on behalf of ALL those struggling to earn their paychecks–regardless of gender, and regardless of their working environment (office, factory, store or elsewhere.) No wonder its been named one of the most influential moves ever.

In addition to that world-famous anthem, Parton has created a memorable Tony Award and Grammy-nominated score consisting of  a dozen new numbers as polished as any one would expect from a seasoned tunesmith from the tin pan alley-Broadway tradition. Aside for more obvious reasons though (she was a key part of the original film, after all) Parton is the perfect choice for this adaptation for many reasons. At its core, this is a story about dreams of better things, better days, and hanging on until then, and few out there can address and express these thoughts via song better than Miss Dolly! The result is a winning theatrical experience that ”shines like the sun”. It also helps that she grew famous writing and performing numerous “story ballads” (or as they’re referred to in the Theater, “expositionary songs“.) As a result, the majority of her tunes are bona-fide knock outs–such as the frenetic “Around Here”, in which Violet instructs the overwhelmed Judy of “what’s expected of her on the job  (Surprise! It requires absolute perfection right from the start.) Then there’s Judy’s equally rousing personal declaration of independence “Get Out And Stay Out”, when she finally stands up to her cheating husband. Furthermore, the way the gals in the typing pool all think Dora-Lee is engaging in a little ‘hanky panky with Frankie’, shunning her and talking behind her back inspires one of the shows most touching songs. Titled ”Backwoods Barbie”, the wounded Dora-Lee entreats Judy not to believe the gossip, and that she‘s just  “hoping‘ for a chance to prove my worth–‘cause even ’Backwoods Barbie’s’ get their feelings hurt.”  In between there’s loads of genuine funny, fast paced feel good melodies–many of which  dare audience members to NOT clap along!

Diana DeGarmo As Dora-Lee Deals With Joseph Mahowald As Her Stinker of A Boss, F.hart

It’s always thrilling when a musical adaptation successfully recreates memorable moments from the film or play it’s drawn from; it’s always better still when it actually manages to improve on them, and that’s precisely what “Nine To Five: The Musical” does. The infamous ’fantasy sequence’ for example, where the trio share their thoughts on how each would personally ‘do ol’ “heartless Hart” in‘, has been transformed into three different numbers. Also thanks in large part to scenic designer Ken Foy, the equally outrageous scene where they have the kidnapped Hart trussed up like “A Piggie at the State Fair” takes on a new and uproarious vitality!

Broadway headliner Dee Hoty leads the cast playing the long-suffering, under appreciated (well, they pretty much all are at this place,) office manager, Violet Newstead. Hoty’s Violet is the patient yet much put upon kind which every office runs on–and in this case, runs over! (“Its hard to swallow pride…when you know the truth inside,” she waxes at one point.) Happily, she has several moments to shine–not least of which is her second act opener, “One Of The Boys” that has her imagining what life would be like were she to at last be given the respect that’s way over due her.) 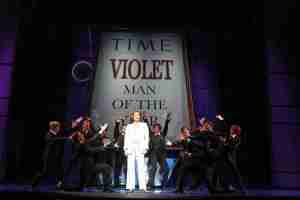 Way More Than Just "One Of The Boys", Dee Hoty Is Violet Newstead!

Joining her is Mamie Parris as the newly divorced, new-to-the-working-world innocent, Judy Bernly, while American Idol Finalist, Diana DeGarmo is the boss’s misunderstood country girl secretary, Doralee Rhodes (the part Parton played in the film.) Others in the cast include Joseph Mahowald as the sleezy boss-from-hell, Franklin Hart Jr.,  Kristine Zbnorik as his chief “spy’ and all around suck-up, Roz Keith and the appropriately studly Greg Goodbrod as the sympathetic (in a strong, quiet way) Joe, a fellow worker whom Violet just may be developing feelings for (–and vice-versa!)

In 2009, the Broadway Production received four 2009 Tony Nominations–including for one for “Best Original Score“, as well as garnering a record-breaking 15 Drama Desk nominations (chief among these, “Outstanding Musical“.) The touring edition is directed and choreographed by Tony-nominated, Jeff Calhoun, who similarly seemed like a natural to take on the task of preparing the show to travel. The Director recalls first meeting Dolly when he was cast as a dancer in the big screen adaptation of “The Best Little Whorehouse in Texas”. “It was a thrill to work with her then and an honor and privilege to be entrusted to direct and choreograph this exciting new tour of 9 to 5: The Musical,” he declares. For this version, Calhoun reportedly worked with Parton to streamline the script, the set, and basically the whole show to make it more “skinny n’ sweet’ for the road.

National Touring Company Of "Nine To Five: The Musical"

Photos by Joan Marcus; Courtesy Of The Segerstrom Center For The Performing Arts

One thought on “Stage Adaptation: “Nine To Five”-What A Way To Make A Lively Musical!”