“The Wizard Of OZ” Really Is A ‘Whiz’ Of A Show In Fullerton, CA!

"We're Off To See The Wizard--The Wonderful Wizard Of Oz!" (3D Theatrical's Cast Of The Beloved Classic)

Who among us hasn’t seen the classic movie based on L. Frank Baum’s  immortal book? Yet, who can say with the same affirmation that they’ve seen the stage version based on that same film? Either way, ‘hold on to you breath, hold on your heart, hold on to you hope“, because now “there’s no place like” the landmark Plummer Auditorium in Fullerton California as 3D Theatricals rounds out their season with the hit musical,  “The Wizard Of OZ‘!

“Birds fly over the rainbow, why then, oh why can’t I?” (Melinda Koen Is Dorothy Gale, While “Nigel” Is Her ‘Little Dog’ Toto)

Patterned after the MGM motion picture, this version was originally adapted by John Kane for the Royal Shakespeare Company back in 1988. All the songs are maintained from the award-winning big screen score by Harold Arlen and E.Y. Yip Harburg, and then some as they include original lyrics, introductions and entire sequences that wound up on the studio’s cutting room floor. Having eventually found its way to the US with several ground-breaking productions (including one at New Jersey’s Paper Mill Playhouse,) it was later remounted at New York City’s Madison Square Garden which proved to be such a winner that a National Tour was launched.

“Professor Marvel never guesses--he knows!” (David Allen Jones As The Man Who Would Be “OZ”-some!)

As for this current staging in Fullerton, thanks to Director/Choreographer Shauna Markey’s skillful execution of both these artistic components, it remains true enough to the movie to satisfy any purist’s out there, while not being an exact carbon copy. This allows the performers to put their individual stamp on the characters they’re playing, and in doing so, breath vibrant new life into what some might, at first glance, dismiss as overly familiar or “old hat” material. Equally notable is the work of Musical Director Allen Everman, whose ministrations of the individual songs, large production numbers and even incidental music (–surprisingly important in a show like this) are lush enough to make you want to, well, just melt! Still another challenge to making the whole thing work lies in keeping it appropriately “magical’ enough via pyrotechnics, ‘flying’ harnesses, and other technological marvels so modern audiences will stay tuned-in and entertained, while not overpowering the genuine sentiments being expressed. Certainly, while the costumes, make-up, and special effects are, without question, appropriately eye-popping, to this rendition’s credit they’re never allowed to over shadow those more ’human’ elements  (after all, like the Tin-man at the finale, this story has plenty of heart!)

“Come out, come out where ever you are, and see the young lady who feel from a star” (Diane Vincent Is Glinda, The Good Witch Of The North)

Nonetheless, from main curtain of rich emerald to the illuminated yellow (and sometimes green) cat walk surrounding the orchestra pit, to simply call this one ‘colorful’ would be a humongous understatement! In the same spirit, numerous design elements call to mind those outrageous Saturday Morning kiddie-programs by “Sid and Marty Croft”. For example, the Oz-ians’ outfits  that open the second act are worthy of “Project Runway” challenge, while in one of the more clever (not to mention subtle) backdrops, Munchkinland recalls the facade of Disney‘s “It’s A Small World”.

"With the thought's I'd be thinkin' I could be another Lincoln..." Melinda Koen As Dorothy Meets "Scarecrow" Graham Kurtz)

Casting-wise, pretty much everyone here doubles at least one other character, save for Dorothy; then again, hers is the one performance on whom every other hinges upon–she’s practically in every scene! Consider too that those Ruby Slippers are some mighty big shoes to fill given all those who’ve previously played the iconic little girl from Kansas. No worries though–Melinda Koen is standing-ovation worthy, with a pristine vocal prowess which she wields well in the service of all these terrific songs, as just those first few notes of the seldom heard opening verse to “Somewhere Over The Rainbow” attests. Similarly, each of the three friends she meets on her way down that yellow brick road, possess their own unique talents that are also put to fine use from beginning to end. Demonstrating a few dulcet tones and navigating plenty of fancy footwork throughout, Graham Kurtz as the Scarecrow is flexible but not clumsy (ala “Ray Bolger’s interpretation.) He really shines though in the “Jitter Bug”. In addition, as the Tin-man, Ryan Ruge has a giant voice and flair for dance that transcend any constrictions caused by his metal casings (–the nifty tap break during “If I Only Had A Heart” is particularly  memorable.) Meanwhile, CJ Porter’s Cowardly Lion is a hilarious cross between Jack Black and “The Family Guy‘s“ Peter Griffin. His comic riffs during “If I Were King Of The Forest”,  instantly elevates this frequently overlooked interlude into a bona-fide showstopper!

“Ring around the rosie, a pocket full of spears! Thought you were pretty foxy, didn't you? Well! The last to go will see the first three go before her! And your mangy little dog, too!” (Tamara Zook Is The Wicked Witch Of The West)

Offering great support, Tamara Zook is appropriately intimidating in each of her dual roles–The Wicked Witch and mean ol’ Miss Gulch. In fact, in this latter guise she’s given one of the best lines in the piece. Driving off on her bicycle after having taken Toto from the Gale Farm, she looks up at the grey sky and  quips “There’s a storm comin’ and I don’t want to get wet!” Likewise, as the Witch, cloaked in glamorous garb, she’s more reminiscent of “Wicked‘s” Elphaba than  menacing Margaret Hamilton. Plus, she even gets a chance to show off her pipes, warbling the lead-in to “The Jitter Bug”.  David Allen-Jones too, does an outstanding job as both the befuddled Professor Marvel and that famous ‘Man behind the curtain” of the title. This time, count on kindly Aunt Em to also double as Glinda the Good, and in Diane Vincent’s capable hands, both weathered farm-matron and whimsical, “Billie-Burke” inspired Fairy-princess are superb. Special mention also has to be given to the talented, tuneful ensemble appearing as the “Munchkins“ –most of them children–who make the first full-out production number, “Ding Dong The Witch Is Dead”  such a complete delight. Furthermore, “Nigel” the three-and-half year old Cairn Terrier who takes on the role of Dorothy’s faithful four-footed sidekick, “Toto” literally never misses a step (–even his first entrance elicits a huge round of applause!)

“Keep straight ahead for the most glorious place on the face of the Earth or the sky” (The Emerald City Awaits!)

According to Producer TJ Dawson, 3D Theatricals began as a family owned and operated producing venture back in 2009, with the goal of “giving older shows new life”.  How wonderful then, that in the case of their present offering, they’ve succeeded better than any Wizard could ever imagine! Hailed as “Orange County’s Newest Theater Company“, the organization lost their previous performing space last year when  “The OC Pavilion” was bought by the Orange County Performing Arts High School; but in a fortuitous turn of events, they were able to take over the Fullerton Civic Light Opera’s entire 2011 season (–including “The Wizard Of OZ“) as part of an agreement which allows them to effectively move into their celebrated venue as well. 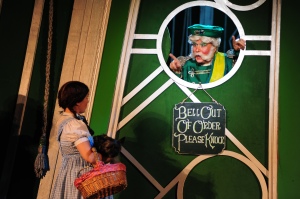 “Please, sir! I've got to see the Wizard! The Good Witch of the North sent me!”

All Photos By Alysa Brennan, Courtesy Of 3d Theatricals. Special Thanks To TJ Dawson, Carlos Martin, And To The Cast & Crew Of 3D Theatrical’s “Wizard Of Oz” For Making This Story Possible.