Applause! Applause! : On The Line & Beyond–Nobody Does It Like Sammy Williams!

Sammy Williams–Far MORE Than Just A Member Of The “Chorus”

The night was April 18th, 1976  when an authentic Theatrical breakthrough  occurred with the announcement of the winner for “Best Featured Actor In A Musical“ –Sammy Williams–for his role as “Paul San Marco” in the ground-breaking “A Chorus Line”. Perhaps even more than the show’s later win that evening  for “Best Musical”, it instantaneously accomplished that which its entire concept set out to do: give long overdue recognition to the individual “Chorus Dancer“–those who do so much of the work on a stage, yet frequently receive so little credit. “Standing on that line was quite a responsibility, and playing Paul was personal from the beginning!” declares Sam. Describing his character as “Confused, hurt and proud, but also possessing  great street smarts, and through it all , amazing dignity,” he asserts, “Paul came at a time when I was growing up in life, so much of what I was personally going through was what ‘Paul’ was going through; it’s difficult growing up publicly (which is what was happening to me,) but that’s what made ’him’ so real!”

“We Admit We’re Slightly ‘Cuckoo–But It’s Dull To Be Too Sane!” With Lauren Bacall In The Tony Award-Winning “Applause”

Although, in one of the theater-world’s more ironic twists, details of Williams’ actual introduction to dance is sung by another character in “I Can Do That” –a number featured in the beginning of the show which tells how he’d sit on the sidelines ’watching Sis go pitter-pat”, until being encouraged to join  in, the Dancin’ man recalls his first time performing  took place a short time later in the first grade when he was cast in the school’s yearly Christmas Pageant. “I was chosen to be the only boy on a stage full of all girl snow flakes!” he laughs; “To this day I don’t know why I was chosen, but I’d say it was my first ‘featured role’. Even back then they could see I had special qualities!”

Feeling “Alive” With Bacall & The cast Of “Applause”

Indeed, those “special qualities have taken this lad from Trenton New Jersey pretty far–all the way onto the Great White Way and into some very memorable productions.“My personality has always played a large part in the roles I’ve had the pleasure to create“ Sam divulges; “Some were more difficult to play than others, some were happier to play than others; some were physically more challenging than others…although vastly different, there was a part of me in each–I’ve loved them all!” His involvement has also meant he’s worked with some of the most celebrated Director-Choreographers of our time as well. “The director/choreographers with whom I worked, were so different in styles and technique!” he explains, “each had their way of emotionally getting me to the place I needed to be–each handled me differently!”   Looking back on his Broadway debut in “The Happy Time”, Williams describes it as “a bitter-sweet experience, but one I will always remember”, granting that it was here he really learned what it took to be a dancer on Broadway–and the  concentrated commitment it took to stay there. “I was eighteen years old and fresh out of high school. I was hired as ‘swing boy’ which meant I was understudy to thirty six boys!” he relates; “although, I was delighted to be in my first Broadway show, I had to wait for someone to get sick before I could perform as a cast member!” Admitting the situation was “frustrating to say the least,” he clarifies “–but it taught me patience and compassion!”   Directed by Gower Champion, he further points out, “Gower was such a kind and gentle man,” conveying how on the show’s opening night “–sick or not–”, every cast-member went on “and I sat down stairs feeling terribly left out!”; however, backstage during the finale, he happened on the Director who said, ‘Sammy, I could never have gotten through previews without your help!  Thank you so much‘ “–then he gave be a big hug and off he went…Gower was very kind to me throughout my career” Sam chuckles, adding “During previews in NYC I went on for every boy in the company–in fact, I was the only one who didn’t get sick! (And I finally did get my chance to perform New Years Eve December 31st1968!)”

His next big hit had him working with yet another celebrated talent, Ron Field in the 1970 Tony-Award Winner, “Applause” starring Lauren Bacall. “Ron loved the way I danced–so much so he created a part for me in ‘Applause’ which was not in the original script!” he reveals. Shortly after, Sam was cast in “Seesaw”–the musical adaptation of “Two For The Seesaw”  which  Michael Bennett ((by then a bonafide Broadway Superstar himself–renowned for helping bring together the original productions of “Follies”, “Company” and “Promises, Promises”, ) was called in to ‘tune-up’ during its out-of-town tryout. There, Williams’ dynamic abilities would make an impression on Bennett who kept him in mind when creating his next ’singular sensation’–the watershed  “A Chorus Line”.  Portraying “Paul”, the vulnerable young homosexual coming to terms with himself even as he strove for a professional Dance career, Sam introduced one of the most poignant monologues ever featured in any show.

Based on the true-life experience of the show’s Co-Author, Nicholas Dante, in order to keep his performance genuine he recounts how Bennett’s methods could be especially insensitive. “‘I want Real Tears! he’d say to me–‘Real Tears!’” recollects the dancer, “Michael accomplished this by often treating me harshly, but he always got the real tears he wanted!“   Further acknowledging that it took “many years of therapy and forgiveness” to help him understand what the Director had done and why, he concludes, “I later figured out his actions were never personal (although at the time, I thought they were.)  They were central to keeping ‘Paul’ telling that tearful story!”!    Years later, Williams reunited with most of the original cast for a one-night only celebration when “A Chorus Line” entered the record books as the longest running show in Broadway history up until that time. “Michael was playing Zach at the end of  Paul’s monologue,” he notes regarding a photo of he and Bennett taken during rehearsals for that monumental event, calling it “One of my most prized possessions!“

A “Prized Pic” With Bennett In A Scene From “ACL”

Earlier this year Williams drew similar acclaim as part of the tap-dancing team, ‘Theodore and Emily Whitman‘ in the Los Angeles company of the smash revival of “Follies”. ““Follies” lifted me to greater heights,” he enthuses”–and Theodore Whitman  was wonderful to play!” Inspired by the character’s spirit, wit, and talent, Sam proclaims, “Every night I would just put on my costume and go out and do what I do best–Sing and Dance!” Starring opposite Broadway Veteran Susan Watson as “his wife” Emily, together, they absolutely charmed the audiences every evening. “Susan helped make Theodore so real for me!” He confesses, including too that this was the very first time he’d ever had a partner on stage. “It’s different when you’re used to playing a character as a single person,” he observes, “but we truly were ‘husband and wife’ on stage–we had great chemistry! Likewise, “Follies” afforded him the opportunity to work with yet another noteworthy Director, Eric Schaeffer. “Eric was the most gentle of all the directors and choreographers with whom I worked,”  offers Sam; “He had tremendous confidence and respect for me! he’d  stand and smile and give me lovely moments of encouragement.”   These days, Sammy can often be found touring to major cities throughout  the US in his  one-man show titled “A Class Act”, and most recently he launched his own website. Located on the web at:  http://www.sammywilliams.me , here fans can learn more about this remarkable performer who seems sincerely content with everything he’s been through–the dramas, triumphs–and the challenges, while remaining above all, eager to discover what comes next: “I’ve learned so much about myself, my past, and the acknowledgements that have followed me throughout my career,” he states; “I’ve had the chance to look back on my accomplishments and am grateful for the things that have been bestowed upon me!” 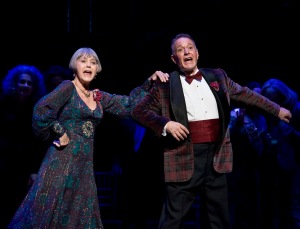 3 thoughts on “Applause! Applause! : On The Line & Beyond–Nobody Does It Like Sammy Williams!”