Gershwin-ner: Downey C.L.O’s “Crazy For You” Has Great Entertainment On Tap

“Let me give you the lowdown-I’m Crazy For You!” Mishi Schueller is Bobby & Andrea Dodson is Polly in Downey Civic Light Opera’s “Crazy For You”

“They got rhythm, they got music…“ in Downey California–in fact, they got some of the bounciest, most vibrant tunes George and Ira Gershwin ever wrote, since the Downey Civic Light Opera kicked off their 58th season on September 27th with the hit  musical, “Crazy For You”! The winner of the 1992 “Tony Award” for “Best Musical”, the entire score reads (or more appropriately put, “sings”) like a veritable who’s who of the Brother’s most immortal classics–among them, such hits as: I Got Rhythm, Bidin’ My Time, They Can’t Take That Away from Me, Nice Work if You Can Get It and Embraceable You.; and  you can bet your shiny, Patent-leather tap shoes that it’s more than worth a trip to the large and well-appointed “Downey Theater” to catch this genuinely pleasing new production. 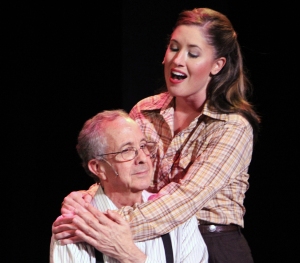 “I’m a little lamb who’s lost in a wood, I know I could always be good to one who’ll watch over me” Polly (Andrea Dodson) with her father Everett (Nick Menecola)

The time is the 1930’s and Bobby Child, the “Devil-May-Care” heir to the renowned “Child Banking Dynasty” would rather spend his time perfecting his ‘Buck and Wing” than spending his family’s considerable fortune (“Nobody in the theater takes me seriously,“ he laments early on, “I just wanna dance–I don’t care about money!”) However, despite the serious efforts of his mother and soon-to-be-ex-fiancé, Irene, Bobby eventually–and seemingly against the odds, manages to achieves his dream and save an entire town while doing it–not by making the rounds on Broadway but by heading out West to the little village of “Dead Rock” Nevada, initially (of all things,) to foreclose on their local theater! There he meets feisty Postmistress Polly Baker whose father Everett is the theatre’s owner. As in the best traditions of the “Great White Way“ and “The Silver Screen“, before the curtain calls, these two outwardly mismatched lovebirds will be billing and cooing their way into their own “happily ever after” which sees them literally waltzing off into the sunset backed by some of the best hoofers this side of a Busby Berkeley Film Festival!

“Shall we dance, or keep on moping? Shall we dance–and walk on air?” Bobby (Mishi Schueller) & Polly (Andrea Dodson) take take to the dance floor

The book by Ken Ludwig, from a concept by Ludwig and Mike Ockrent, which itself was inspired by vintage material from Guy Bolton and John McGowan, is exceedingly witty–loaded with frequently laugh-out-loud-worthy one-liners (there’s even a reference to “Les Miserable” if your quick enough to pick up on it–) ‘just-missed’ connections, mistaken identities and of course  plenty of opportunities for breaking into song. In addition, Marsha Moode’s sharp and snappy, direction makes great use of both the theater’s ample center stage area and the two smaller ‘side’ stages on either side. Interestingly, the first (longer) act, is primarily devoted to introducing our hero and heroine and setting up their situation. The Second (shorter) act is where individual and supporting characters really get their turn at bat and this is where Moode’s directorial finesse really comes into play. Equally remarkable throughout, is Nathan Wise’s Choreography, which pays homage to all those great old movies as well as incorporating some of the show’s original Broadway Choreographer, Susan Stroman’s  signature moves. Of course it also helps that many of Gershwin’s songs reintroduced here are like a giant kick-line just waiting to happen, but perhaps most fascinating though is how he often takes smaller, simpler moves and through repetition, builds on them, creating in many instances the “whole” of a dance routine that’s actually more impressive than the sum of its “individual parts“. Not to be overlooked, Eddie Clemet also does a superlative job conducting the D.C.L.O. Orchestra. 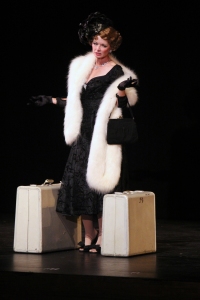 “I can make a Saint a Sinner when I want to!” Irene Roth (Charlotte Carpenter) is a Tigress in ‘Haute Couture’

Let it be said as well, that they’d all be hard-pressed to find a more energetic, even exuberant  cast, starting with the two leads! As Bobby, Mishi Schueller possesses boyish good looks and a genial personality (not to mention a powerful tenor voice) He’s also pretty fleet of foot when he needs to be too–as is evidenced during the rousing “I Can’t Be Bothered Now” when he jumps on the roof  of his mother’s Duisenberg (from which a long line of Chorines eventually emerge to provide proper high-stepping back up as well!) Incidentally, the car itself is also worth a mention as, according to Moode, it weighs 800 lbs and was shipped in all the way from Kansas just to appear in this show! As the headstrong ‘Polly’ (–the only woman within 30 miles, we’re told!) Andrea Dodson too, proves she’s a high-octane vocal power to be reckoned with, and particularly excels when delivering Polly‘s soulful ballads, “Some One To Watch Over Me“ and “But Not For Me“. Few singers these days really know how to interpret Gershwin lyrics the way they’re meant to be; refreshingly, Dodson knows and does! Yet it’s during her and Schueller’s numbers together that this particular production really shines. Their shared Intermezzo, “Shall We Dance” really kicks the show into high-gear as the pair ‘trip the light fantastique’ like a latter-day Astaire and Rogers

“I’m growing balder from the hair I’m tearing–you ought to know by now ‘What Causes That!” William T. Lewis as Bella Zanger & Mishi Schueller as Bobby (in disguise) are “Dueling Bellas”

William T. Lewis also does a splendid job as Bella Zanger, the blustery showman, and proud Producer of the “Zanger Follies” (“Featuring the most beautiful women in New York” he boasts.) Although his character doesn’t really come into his own until after intermission, once he hits that ol’ desert settlement–watch out! (Because it also happens that Bobby has been impersonating him–and it’s this guise that Polly falls in love with.) This leads to Lewis’ funniest moment when, shocked at discovering his look-alike, the displaced Impresario proclaims, “I am beside myself!”  The ruse also inspires the jumpin’, jivey duet “What Causes That?” presenting the two ‘Bellas’ both belly-aching over the uncertainties of love. Likewise, Charlotte Carpenter sparkles with the effervescence of a “Pink Champagne” cocktail as Irene Roth, Bobby’s Leopard skin-clad  ‘steady’ (of  five years.) Her saucy solo turn “Naughty Baby”,  in which this Park Avenue Ice-Princess reveals how underneath all that excruciatingly fashionable finery beats the heart of real hot-blooded vixen, also rates as one of the second act’s highest high points (“I was top of my class at Bryn Mawr“ she quips; “All the boys were underneath!”) Meanwhile, Paul Preston puts his handsome appeal and considerable charisma to excellent service in the too-easily-over looked role of Lank Hawkins, “Dead Rock’s” self -proclaimed “Man Of Vision” who wants to marry Polly himself. Listen closely and you’ll notice it’s he who gets some of the very best lines: ”We could have another ’Cleveland’ on our hands,” he declares about the town at one point, ’’Stead of being the ’arm pit’ of the West.”  Later though, when its suggested he would do well by turning his saloon into a gambling joint, he scoff s  “Who would want to gamble in Nevada?!”

The Downey Civic Theater in Downey California is the REAL home of “The Zanger Follies” (as seen in the D.C.L.O.’s new production of “Crazy For You”)

Playing through Sunday October 14, 2012, curtain times are Friday and Saturday evenings, October 12, & 13  at 8:00 p.m., with the Sunday, October 14th matinee at 2:30 p.m.  The Downey Theatre & Theater Box Office are located in the Downey Civic Center at  8435 E. Firestone Blvd. in the city of Downey, CA 90241; tickets may be purchased at the theatre or by calling (562) 923-1714; for more information checkout: Http://downeyciviclightopera.org . Would it be too ‘obvious’ to suggest that “Crazy For You” is a show you’ll be ‘crazy’ for”? Then consider instead: Given the classic songs, terrific dancing, and entertaining story–all performed by an enthusiastic cast, to borrow from still another of the score’s many timeless numbers, “Who could ask for anything more?”