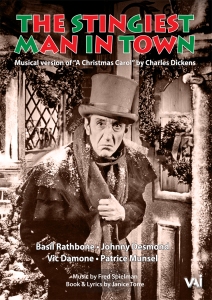 …So harmonize 50‘s-era Troubadours, “The Four Lads” at the start of “The Stingiest Man In Town”, an original musical based on Charles Dickens classic “A Christmas Carol”. Told in three acts, (each introduced by this caroling quartet,) with book and lyrics by Janice Torre, music by Fred Spielman, and direction by Daniel Petrie, it originally aired as part of the “Alcoa Hour” program on December 23, 1956 pre-dating the big-screen block-buster “Scrooge” (–long considered to be the definitive musical version of the tale) by nearly 15 years; yet this actually surpasses that better known film-adaptation in terms of score, performances and plain old-fashioned charm (–this was originally performed live too!) Torre’s teleplay manages to streamline the story while still maintaining all of Dickens’ classic lines and memorable plot-points. As expected, each specter “etherealizes” thanks to some ground-breaking (for the time) video effects, but the feeling overall is less somber or foreboding than in more recent re-tellings, making it especially fitting viewing for children and grandchildren. Remember also, this was before the advent of color TV or hand-held video cameras where each shot had to be methodically planned out and timed with absolutely no room for errors. For this alone, it could be truly said here’s one “Dickens” of an accomplishment for everyone involved! 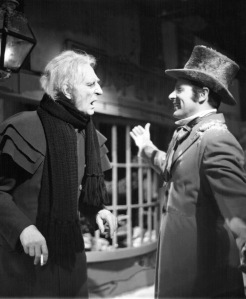 “What’s so merry on Christmas Day?! The ‘merry’ money you throw away? The ‘merry’ bills you have to pay? When you say “Merry Christmas”–I say BAH!” (Basil Rathbone as Scrooge and Johnny Desmond as his nephew, Fred)

As the notorious Ebenezer Scrooge, Basil Rathbone leads a ‘once in a life time” cast  of  A-Plus talent that  includes Johnny Desmond, Vic Damone, Martyn Green, Patrice Munsel and Betty Madigan. From Broadway to Pop to Opera, each had made their name in music, theater or both, thus appealing to the largest audience possible! For instance, Madigan plays Bob’s eldest daughter, Martha Cratchit–traditionally a minor character in the piece; but as the songstress was then a popular newcomer on the music scene, it’s she who was given the lovely “Yes, There Is A Santa Claus” sung to young Dennis Kohler as “Tiny Tim“. Of Scrooge’s three ’spirited” visitors,  Ian Martin is the first to appear “when the clock strikes twelve” as the “Ghost Of Christmas Past”,  while Robert Wright is the amiable “Ghost Of Christmas Present“ and Keith Harrington is the black shrouded and eerily silent “Ghost Of Christmas-Yet-To -Come”. Likewise, before he took “The Great White Way” by storm in Frank Loesser’s “The Most Happy Fella”, Robert Weede was the apparition of Scrooge’s late partner Jacob Marley. 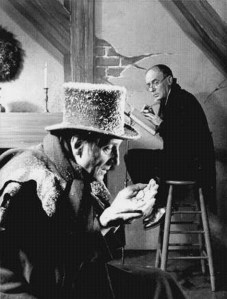 “There was a mean and stingy man named Ebenezer Scrooge; His heart was hard and cold because he was the Devil’s stooge…” Basil Rathbone is Scrooge with Martyn Green as his long suffering, ever patient clerk, Bob Cratchit.

At first glance, the casting of Basil Rathbone (an actor admittedly, not known for his vocal abilities) might seem a surprising choice; however, chalk it up to the very strength of his talents that once his performance has been seen, it’s genuinely hard to imagine anyone else. His turn as the Yule-tide season’s  most celebrated  “stingy old crank”, is near picture perfect (even if his pitch isn’t!) Patrice Munsel too, is breath-taking as Belle, Scrooge’s one-time intended while Vic Damone does an equally superlative job as Ebenezer’s younger incarnation. Together they share a magnificent duet, “Golden Dreams”. Optimistic and sincere at the outset  regarding their future together, he sings “I’ll build a wall around us…”; unhappily though, her refrain soon becomes “You’ve built a wall between us…”.  Throughout, the passage of time is shrewdly conveyed with the building of a gilded wall that, by the song’s conclusion, literally stands between them. The music next segues into the wistful “It Might’ve Been” as they part from one another with the elder Scrooge helplessly looking on.

Similarly, utilizing movement from such widely varied sources as Ballet and Modern dance to Grand waltzes and authentic Victorian Gavottes and Quadrilles, John Heawood’s Choreography runs the lively gamut from bouncy and bright to even strangely (but appropriately) frenetic and menacing, as in the third act “Devil’s Ballet”. Occurring upon the ‘manifestation‘ of  the dreaded “Ghost Of Christmas Yet-To-Come“, the street opens to reveal a large and rather gothic cemetery ready to welcome old ’you know who’ as its newest resident! The sequence, which forms the bulk of this “future” episode is a unique mix of contemporary kinetics with classic Greek drama, as darkly-clad ‘ghouls’ rush at Scrooge ominously suggesting through movement the horrors he can expect if “these shadows remain unaltered by the present”. Afterward, having ultimately learned his lesson, he loudly intones “Mankind should be my business–his welfare should be may trade!” In presenting this, what is too often the most forlorn or even sinister part of the story in this way, the producers also instill a new kind of vitality to it, keeping this version fresh and identifiable–particularly for younger viewers. Still another (decidedly more whimsical) example of Heawood’s work is the sprightly “Toy Frolic”. Staged to herald the arrival of the second of Scrooge‘s other-worldly visitors, back in his room, the old money-grubber suddenly finds himself greeted by Clowns, Jumping Jacks and pirouetting Music Box Dancers–each proclaiming  “Listen to the sound of the Christmas Spirit–can you hear it? Can you hear it?” as “The Ghost Of Christmas Present” proudly makes his entrance! 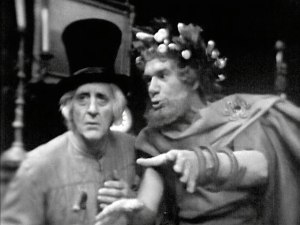 “Jumping Jacks and Dancing Dolls, tumble in the jumble of bouncing balls–see the Christmas Toy Ballet, dance to the bells of a sleigh!” Robert Wright is the “Ghost Of Christmas Present” with Basil Rathbone

Torre and Spielman’s Broadway-quality score easily ranks among the very best ever created for an original TV musical– employing plenty of sharp and witty word-play: (“Oh, he’s so tight, so tight I say–he wouldn’t give a bride away! It hurts him so to pay one cent–he wouldn’t pay a compliment!” resounds a group of street people in the vivacious title number.) So too, “An Old Fashioned Christmas” sung by Crooner Johnny Desmond as Scrooge’s nephew Fred, is an effective anthem for all the later goings-on, and his stately “Birthday Party For A King” is indeed unforgettable. Meanwhile, the direness of Tiny Tim’s precarious situation is effectively underscored in the touching “One Little Boy”, in which Robert Wright sings: “One little boy who cannot walk is not a broken toy; one little boy can laugh and talk and fill a home with joy–and no one else can take the place of that one little boy!” In fact, although this particular production as a whole may not be the most remembered, it nonetheless set the standard for tunes that would be introduced in other, now classic Christmas specials like “A Charlie Brown Christmas”, “Mr. Magoo’s Christmas Carol” and all those terrific “Rankin Bass” productions that followed (Ironically, it’s this latter team who actually re-made it into a much pared-down 1978 animated special featuring the voices of Walter Matthau and Tom Bosley.)

In the end, Old Scrooge learns “Mankind Should Be My Business” (Basil Rathbone with Martyn Green)

Nothing compares to this initial masterpiece from the “Golden Age“ of television though and, having been digitally re-mastered, it’s at long last available on DVD from Video Artists International (V.A.I. Music). For more information, or to order a copy in time for your own Holiday celebration, log onto:  www.vaimusic.com.. Not only are you sure to have one more favorite on your seasonal viewing list, you’ll really know what it means the next time you hear “They don’t make ‘em like that anymore”!

Special Thanks and “God Bless Us, Everyone” to Foster Grimm and the entire crew at Video Artists International (V.A.I. Music) for making this story possible.