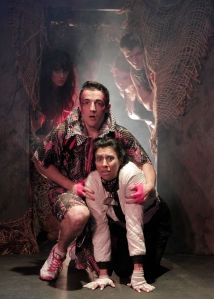 Keaton Williams as the “Vilociraptor Of Innocence”, with Alex Bueno as “Mime-o-saurus” dare to ask forbidden questions!

Performed without intermission, the basic premise is taken from Steven Spielberg’s 1993 Blockbuster about Dinosaurs brought into the present age. Set on that infamous island, this time around the story is told through their eyes, only intersecting the movie at key points (and never with any specific “human” characters!) As explained in the rocking opening number, these modern-day dinos are genetically engineered (or ’cloned‘) from blood taken from the preserved remains of prehistoric mosquitoes found in fossilized resin known as “Amber”. However, given that many of the DNA strands discovered are incomplete, genes from frogs have been used to ‘fill-in“ any missing elements (“we’re 9/10ths Dinosaur. 1/10 Frog” they sing.”) So too, in order to maintain control over the population, the powers-that-be made certain any dinosaur ’created’ is strictly female. Trick is, out in the wild when males are in short supply, female frogs have been known to spontaneously ’change sexes’ to ensure their survival (“Crazy things can happen with certain species!” they add.) Is everyone clear? If not, there’s also a brief appearance by  “Morgan Freeman” (–not so much the stately actor known for similar explanatory work on the “Science Channel“, but more the witty stage-device, who quickly goes over all this before the dinosaurs decide to eat him.) 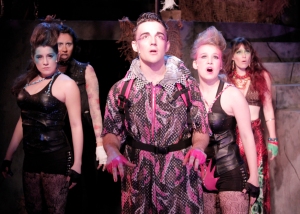 “Crazy things can happen with certain species!” Vilociraptor of Innocence  with “T-Rex 1”, T-Rex 2” and “The Tribe”

Yet, these are some very ‘human’ Dinosaurs here–with very human existential questions. Fresh-faced Keaton Williams is terrific as the “Velociraptor of Innocence” around whom the entire story unfolds, while Micaela Martinez and Kellie Spill are equally outstanding as a pair of giddy BFF’s (initially anyway,) called  T-Rex 1 and T-Rex 2 respectively. Jackson Tobiska too, provides the proper air of authority tinged with pomposity as their “tribal leader“, the “Velociraptor of Faith” (also known as “Pastor”) and Camryn Zelinger conveys a cool, sultry presence, pulling double-duty as both that fore-mentioned semi-narrator/appetizer and the “Velociraptor of Science”. For this naive (if formidable) bunch, this latter lizard  just may be the most dangerous of them all–it actually thinks for itself! There’s even a “Mime-o-saurus” played by Alex Bueno, who, as one would expect, ‘acts out’ just about everything, and  Taylor Stephenson (who also serves as the show’s musical director) rounds out the cast as the “Piano-saurus“. Although it’s kind of tricky watching supposedly female roles played by men and vice-versa, hang in there–you’ll soon get  used to it!  In the beginning, all is pretty wonderful as they exhort “It’s a beautiful day to be a woman, and I wouldn’t change a thing”; that is until T-Rex 2 starts to experience strange ‘stirrings” which might even be called ‘queer’. 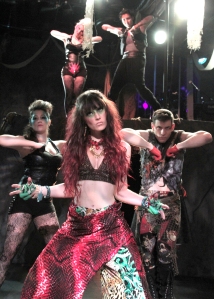 “ ‘Indubitably’ is a science word–it means YES!” (Camryn Zelinger is The ‘Velociraptor of Science’.)

The grisly fact is, she is fast becoming a monster–by sprouting one! (“It looks real oppressive!” T-Rex 1 gasps.) This leads to a side-splitting sequence involving T-Rex 2 looking into a pool of water as Mime-o-saurus, situated on the up-stage platform, represents T-Rex 2’s fully engorged…uh… ‘reflection’! What’s a nice girl to do when suddenly, she starts turning into a dude? (Making matters worse, she doesn’t even know what one is!) Such ‘changes’ give rise to doubts among them all and, as the “Vilociraptor of Faith“ warns, “Doubt can be infectious!” Yet, doubt can also lead to questions, and as is also expressed, “questions NEED answers”. When the electricity around the high-voltage fence that contains them unexpectedly goes out, the “Vilociraptor of Innocence” strikes out to find the truth that can only be uncovered in the forbidden “Lab Almighty” from which they all came.

Co-writers Marshall Pailet (–who also composed  the music,) Bryce Norbitz and Steve Wargo have ’evolved’ a delightful little parody taking the kind of provocative gag one might find on “Robot Chicken”, itself culled from a relatively insignificant aspect of a major motion picture’s plot, and developed it–utilizing loads of no-holds-barred  humor and lots of genuine heart. Perhaps more refreshingly, beneath all that sentimental zaniness is a real mind as well! The result is a rousing mix of Broadway and the big screen  with a few knowing nods to “The Flintstones” thrown in. Make no mistake though, this is very much a thinking person’s musical dealing with some serious philosophical, psychological and sexual themes, which at times entail some pretty strong language and imagery; as such it is neither for children or those with rigid sensibilities. All others are sure to find this a real “Darwin-ner” if ever there was one. 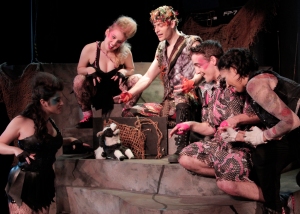 “Hello Little Goat”, the cast sing about their imminent ‘meal‘.

Named the Chance Theater’s current “Playwright in residence”,  Pailet directed this West Coast Premiere, for which, word has it, the script was tightened from its Off-Broadway run with a different opening, reworked ending and the addition of several new songs! The music spans a ‘Mammoth’ melodious spectrum from light, airy and even romantic to downright dark and gritty. Likewise, Kelly Todd’s top notch choreography isn’t just a walk in the park, it’s more like a dance–literally! She captures the spirit of the film in uncanny ways, particularly in a driving number titled “Mama”. Here, the “Vilociraptor of Science” angrily confronts the “Vilociraptor of Faith”, wherein the pair slowly, but intently, circle one another mimicking “Jurassic’s” gripping ’kitchen scene’. Other moments integrate hip-hop steps, struts, and stomps from a more ‘urban’ type of jungle–and there’s even a nifty tap-break where the “Vilociraptor of Innocence” cuts loose (in tennis shoes yet!) Always, the cast makes resourceful use of the limited layout–utilizing the split level set to create the illusion of  greater size, scale, and force as befits their ’gargantuan’ subject matter.

Best described as  new-wave meets the stone-age, Anthony Tran’s costumes make innovative use of mesh and patterns to effectively imply scaly reptilian skin, and he smartly slips dashes of pink into the mix to shrewdly suggest femininity, with red signifying masculinity. By the same token, Matt Schleicher‘s lighting employs plenty of greens and grays to heighten the sensation of being in an expansive outdoor jungle, while the scenic design by Joe Holbrook incorporates a number of gauzy drapings over the stage and seating areas, keeping the actual performance space sealed off via several ropes (–reminiscent of that seen in the movie.) Special mention also has to be given to Ryan Brodkin’s incredible sound design which recalls bona-fide ‘cinema-esque’ surround-sound inside the live venue! 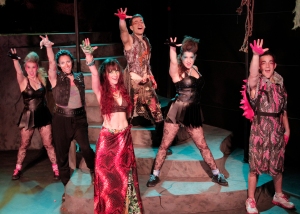 This musical sets out to prove “Life finds a way”, so you should also–right to “The Chance Theater“, located at: 5552 E. La Palma Ave. in Anaheim Hills, California. Performances are Wednesdays, Thursdays & Fridays at 8pm; Saturdays at 3pm & 8pm, and Sunday at 2pm. Tickets can be purchased by calling (714) 777-3033 or by visiting www.chancetheater.com. Student, Senior, Military and Group discounts are also available (For group discounts call 714 900-3284.) Give “Triassic ParQ–The Musical” a go and enjoy the ride (–’cause what a  ride it is!)