It‘s No Fairytale: 3-D Theatrical‘s “Shrek, The Musical” Is Something To Roar About! 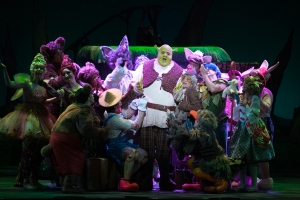 ‘was not long ago, in the not-too-far-away land of Fullerton California, that a valiant theatre company called 3-D Theatricals took a giant step forward in their evolution of presenting quality entertainment, with “Shrek the Musical”. Based on DreamWorks’ ground-breaking animated classic, the hilarious story of moviedom’s most famous ogre has been brought to dazzling new life on stage at the historic Plummer Auditorium, and judging from the enthusiastic reactions from those attending Saturday night’s opening (–a new record for the organization–) whether younger, older or anywhere in between–spectators across the board were happily indulging themselves in the sheer, unadulterated joy this new production boasts. 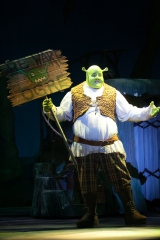 “Do I have snowball’s chance? Are my prospects just too grim? I spent my life stuck in the mud, now I’m crawling out–on a limb!” T.J. Dawson is the Ogre, “Shrek”

By now everyone should be familiar with the jolly green ogre whose name in German means “Terror”; but there’s very little terrible about him–or indeed, this show. Certainly, so much of the original film gives itself over to musical sequences that it wouldn’t be surprising to discover if it had initially been conceived as a musical in the first place. However, where “Shrek, The Musical” decidedly stands apart and above the film it’s based on, is how it actually improves on that Academy award-winning Blockbuster’s script, keeping all its best-loved moments while providing more background into the characters. Either way, it’s a big, fun, colorful and shamelessly ‘guilty’ pleasure where the laughs come fast and frequently! Of course, if the book by David Lindsay-Abaire flirts with moments of simple titillation (–Shrek and Fiona’s “gross-out battle” has to be seen to be believed–) it doesn’t at all rely on them, favouring instead humor that’s as sharp, witty and genuinely satirical, as his lyrics are. In fact, seldom has a musical’s score included such smart and catchy phrases, which are all set to Jeanine Tesori’s equally effervescent music. Once upon the house lights dimming, we’re introduced to a wee lad with pea-green skin. 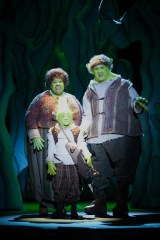 “…And so the little ogre went off and found a muddy patch of swamp land, far, far away.” (Emilie Lafontaine is Little Shrek; Amber J. Snead & Michael Cavinder are Mama & Papa Ogre)

“Now you are seven” his parents tell him, “so it’s time to go away”; furthermore, they advise him that out in the ‘real world” “Every dream comes true–but not for you!” Flash forward and “Shrek” has come of age, living in a swamp where things are getting pretty crowded. In the nearby town of Duloc, the despotic “Lord Farquaad” has ‘huffed and puffed and signed an eviction notice” effectively banishing all fairytale characters to this same wet-land home of our hero and, given that he’s an ogre who relishes his privacy, he’s not at all happy about it! It seems the not-so-good Lord is out of sorts because he’s not really a king; to be that he’d need to at least marry a real Princess. While chained to a torture/baker’s rack, none other than the gingerbread man (aka “Gingy) tells him of one he’d heard about from the “Muffin Man” (who lives on Drury lane.) Trick is, she’s been locked in a tower since she was a child, and its guarded by a fearsome winged dragon! That’s when Shrek and his intrepid sidekick, a talking (and singing) donkey, are called in to set things right. 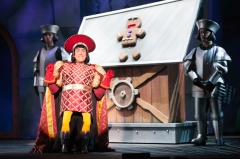 “I can see my future, and so it shall be done! It’s total domination–with some torture just for fun!” (David F.M. Vaughn is Lord Farquaad with ‘Gingy”, the GIngerbread Man)

Director David F.M. Vaughn (–an alumnus of the Broadway version,) pulls double duty–and gets the biggest laughs–as the diminutive villain, Lord Farquaad. His introductory number, “What’s Up Duloc?”  is an absolute crowd-pleaser where we’re offered a different kind of Magic Kingdom (were it manufactured by Mattel.)  Behind the glittery, molded plastic facade (–and that’s just describing the residents–) things are anything but happy! 3-D Theatrical’s resident producer T.J. Dawson steps from behind the scenes and into the spotlight, achieving a tour-de-force performance, in the title role of the Ogre with the (sometimes reluctant) heart of a Prince. Providing his character a solid, funny-but-empathetic presence (very necessary for a story like this,) he also possesses a polished way with a song that is anything but ‘monstrous’.  At his side throughout, Brandon Armstrong is lively, loud, and likeable as Shrek’s four-hoofed cohort, “Donkey”. Gifted with an awesome and soulful voice,  his first act charmers, “Don’t Let Me Go” and “The Travelling Song” provide an A-Plus showcase for such incredible (and powerful) vocal talents. In the same way, Melissa Wolfklain as the feisty Princess Fiona, is pretty, spunky and where appropriate, touchingly vulnerable. In “I Know Its Today” we see Fiona, imprisoned in her tower since childhood with nothing but a library filled with fairy-tales to keep her company, ‘grow up’ into a great beauty–but one with a secret! Assisting in this ‘transition’ is young Hadley Belle Miller as little Fiona, who herself has a voice to be reckoned with. Joined by Brennley Faith Brown as the teenaged Princess, the trio delightfully elevates this number to show-stopper status! 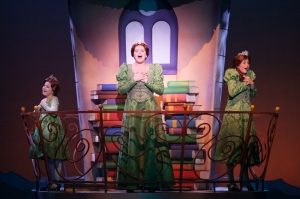 “I know he’ll appear, ’cause there are rules and there are strictures–I believe the story books I’ve read!!” (Melissa Wolfklain is Fiona, with Hadley Belle Miller & Brennley Faith Brown as her younger ‘selves’)

Standouts also include Arthur L. Ross, who takes on several roles but is especially memorable as the infamous” Pied Piper”, and Daniel Dawson (himself one of 3-D Theatrical’s Associate Producers) who appears as a wise-cracking Pinocchio. Even the dragon–a bona-fide tribute to what modern puppetry can accomplish–sings, thanks to the dynamic contribution of Amber J. Snead. Both kinetic and melodic elements superbly come together in “Forever”–‘her’ duet with Donkey, which starts out as adversarial but quickly ’warms up’ as their romance…uh, ‘takes flight‘. Real “Shrek” enthusiasts will also be pleased that ‘Puss in Boots’–not seen in that first movie–makes a cameo appearance here as well. Without question though, among the most entertaining moments are when the entire cast gather together and share the stage, as during their spirited anthem to individuality, “Let Your Freak Flag Fly”. To be sure, this timely little proclamation-with-a-rousing-beat expresses the whole message of “Shrek”: “What makes us special, makes us strong!” 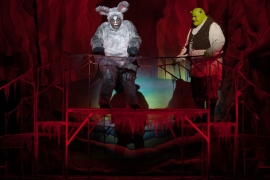 “I think you’re bluffin’: stompin’ around–all that huffin’ and puffin’!” (Brandon Armstrong is Donkey with T.J. Dawson as Shrek)

Props also have to go to the various designers who have capably undertaken the more technical aspects of what in many respects could otherwise be considered an ‘Ogre” of a show. Both set Designer Tom Burderwitz, and Lighting Designer Jared Sayeg’s work complement one another beautifully, creating a lush ’other-world’ that looks like it just might exist somewhere in our dreamiest imaginings, while Costume Designer Kate Bergh has neatly (and in some cases, innovatively) created a plethora of unique, polychromatic costumes–never stooping to copy any preset over-Disney-fied‘ concepts. Meanwhile, Jason Vaughan of “Le Chef Costumier”, the same company responsible for both the Broadway and National tour of “Shrek”, has handily created sixteen different prosthetics needed to transform Dawson and Wolfklain into Ogres for every show; Puppet-crafters Christian Anderson and Derek Lux too, have managed to make supporting ’players’ like “Gingy” and the Dragon, come off as surprisingly ’human’. Together, this team of theatrical wizards are responsible for much of the magic the viewers are treated to, expertly making this already enchanting production downright spectacular! 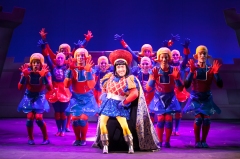 “Welcome to Duloc–such a perfect town.” (David F.M. Vaughn as Farquaad and his ‘perfect’ citizens)

So ditch your torches and pitchforks and run to the Plummer Auditorium, located at 201 East Chapman Avenue in Fullerton California, because “Ever After” only lasts until August 4, 2013 for this marvellous and family-friendly thrill ride. Then, starting August 9th, “Shrek” will move to The Redondo Beach Performing Arts Center, located at 1935 Manhattan Beach Blvd in Redondo Beach, California, where it will run through the 11th. Showtime’s at Plummer Auditorium are Thursdays, Fridays and Saturdays at 8pm, with Sunday matinees at 2pm. (An additional matinée will be performed on Saturday August 3rd at 2pm.) Showtime’s for the Redondo Beach Performing Arts Center are: Friday August 9 at 8pm, Saturday August 10 at 2pm and 8pm, and Sunday, August 11 at 2pm. For tickets call 714-859-2770 ext 1 or log onto: www.3DTshows.com . (Student tickets and special group rates are also available.) 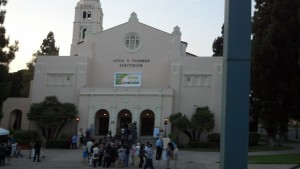 The Historic Plummer Auditorium is located at 201 East Chapman Avenue, in Fullerton, California.

One thought on “It‘s No Fairytale: 3-D Theatrical‘s “Shrek, The Musical” Is Something To Roar About!”