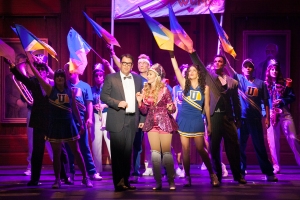 “Get On Your Feet, There’s No Retreat, ‘Cause She’s Legally Blonde!”

Oh My God, You Guys! “Legally Blonde, The Musical” 3-D Theatrical’s new closer for their 2013 season, is totally worth the wait! Having opened on Friday, October 11th, 2013, it will play for three weeks at the historic Plummer Auditorium in Fullerton California, before transferring for an additional four performances at the Redondo Beach Performing Arts Center in Redondo Beach California. With music and lyrics by Laurence O’Keefe and Nell Benjamin the book is by Heather Hach. Based on the hit 2001 comedy starring Reese Witherspoon. “Legally Blonde, The Musical” tells the story of spunky Elle Woods, and like many recent screen-to-stage adaptations, Ms. Hach’s libretto actually tightens and improves on the action introduced in the motion picture. The results are a fun, frothy, life-affirming story with loads of big laughs and great numbers. 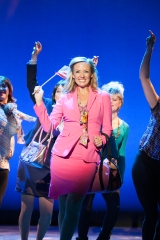 “I’m Going back To The Trial, But I’m Going Back In Style” (Stephanie Wall As ‘Elle Woods’)

All of the principals here are vocal power-houses and most have the moves to match! Stephanie Wall is Elle Woods –and being that this is her story, she’s practically on-stage the entire time. “Blondes make commissions so easy” says a greedy (and presumptuous) Rodeo Drive sales-girl early on, but Ms. Wall’s ‘Elle’ may be perky, cute and yes, blonde but she’s anything but dumb! A sorority girl who enrolls at Harvard Law School to win back her ex-boyfriend Warner, once there she discovers how her often unorthodox insight and sheer zest for living can help others, as she successfully defends exercise queen (and Elder “Delta Nu” Sorority Sister) Brooke Wyndham in a high-profile murder trial. Gifted with a vibrant voice, hers is strong enough to raise the roof, yet emotive enough for an introspective ballad such as the wistful eleventh hour title number (initially about resignation to the tyrannies of others’ negative opinions.) Prior to this, her Harvard Law application “essay” is a full-blown production number of its own—complete with band and pep squad all touting the strength Elle has for getting things done (still one more improvement on the simple video used in the film.) It’s so campy it works in spades. 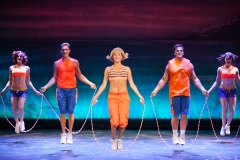 “Do You Want An Easy Miracle? Do You Want To Lose A Pound Or Two? Then Turn This Tape Right Off–My Workout’s NOT For You!” (Emma Degerstedt Is Brooke Wyndham)

Matthew Benedict does an impressive job in the fairly thankless (and purposefully so) role of Warner Huntington III. With a strong, soulful voice, he shines in Act One’s “Serious” in which he breaks up with the Golden-tressed leading-lady just when she was expecting him to propose. (“But Richard Simmons was my neighbor!” she protests when met with the idea that she might not be good enough for his blue-blood East-Coast ‘pedigree’.) 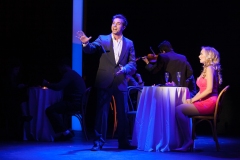 “One Look At You, Looking Like A Dream Come True Would Leave Me Speechless, Like You Always Do.” (Matthew Benedict Is Warner Huntington III)

Carly Nykanen too, does a fine job with a rather difficult role of Vivienne Kensington—aka “a constipated polo shirt with a mousy-brown bob”; sure, she starts out as the gal we’d love to hate, but, as she gradually softens toward our heroine, we too soften towards her. Given the sheer power of Ms. Nykanen’s vocal ability it is a shame that her character wasn’t given more of a chance to show it, but where she does (mostly toward the end of the second act) it certainly is thrilling and unexpected.
Christopher Carothers’ is appropriately sleazy and demanding as Professor Callahan—the man who holds the key to all his student’s futures—knows it and isn’t afraid of using it to his advantage. His song, “Blood In The Water” introduces his true colors: law is about power—not justice. At the other end of the spectrum, Matt Bauer is Emmett Forrest, Professor Callahan’s student aid, who works two jobs to stay in Harvard Law School and “hasn’t slept since 2007”; he acts as ‘Elle’s” rumpled, boyish and likeable guardian angel, teaching her to take her studies and life seriously. In fact, his numbers –particularly “Chip On The Shoulder”, likewise effectively augment the action of the movie, showing the progression of Miss Woods as both a student and ultimately his perfect match. Another dynamic presence is Lindsey Alley as Paulette, the kindly hairdresser at the “Hair Affair”. A bona-fide triple threat performer, she makes the most of every moment throughout; among her best is leading the dance in the “Legally Blonde Remix”. Not to be overlooked either is the instant audience favorite, “Frankie” the Chihuahua as Elle’s devoted dog, “Bruiser”–of whom, one enthusiastic first-nighter was overheard to quip, should be seen more. 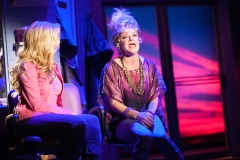 “Elle, Do you know the number one reason behind all bad Hair decisions? LOVE!” (Lindsey Alley Is Paulette)

Joining them all are Elle’s trio of Sorority Sisters, Margot, Pilar and Serena (played by Jamison Lingle, Tory Trowbridge and Micaela Martinez, respectively.) Even when they are not supposed to be with her physically, these loyal lasses of “Delta Nu” remain her guides “in spirit”, acting as an inner-conscience for her, Greek Chorus for us. (Dressed in ethereal white when they serve this former function, one advises her, “We’re not HERE here, we’re here in your head.”) Supporting everything is a cast of 27 performers (including the four-legged one) who particularly make the goings-on more jubilant during the many, often hilarious, group numbers. 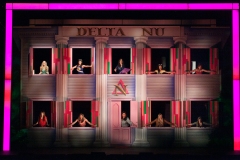 “We Are The Daughters Of Delta Nu…”

These include Paulette’s dream of better things in “Ireland”, “Bend And Snap” (wherein Elle shows her how to get them,) “Take It like A Man” as Elle, herself instructs shabby Emmett how to cultivate a ‘look” that commands respect, and the rousing opening featuring the entire sorority.
It’s always tricky taking a fairly recent cinematic property like “Legally Blonde” and condensing it down to a musicalized stage vehicle; happily, the direction by David F.M. Vaughn (who returns after directing and starring in this summer’s “Shrek, The Musical”,) is sharp, focused and fast paced, while skillfully combining a number of competing elements into one (in this case, huge) cohesive whole without losing any of the sheer joy and ebullience of each. Similarly, ranging from an athletic synchronized jump-rope extravaganza (supposedly depicting a Tivo-recorded exercise program) to a hip, show-stopping Irish line-dance, Linda Love Simmons’ jivey choreography is like the luscious cherry a top this delightful sundae. Special mention also has to be given to Jean-Yves Tessier’s inventive lighting design featuring a multi-chromatic border and scrim that cleverly ‘changes’ to subtly comment on the action (pink, green, and even to rainbow-colored when the on-stage happenings warrant it.)

“There’s A Chip On My Shoulder And Its Big As A Boulder; With The Chance I’ve Been Given I’m Gonna Be Driven!” (Matt Bauer Is Emmett Forrest)

Anything but sophomoric entertainment, show-times for “Legally Blonde, The Musical” at Plummer Auditorium are Thursdays, Fridays and Saturdays at 8:00 PM, with Sunday matinees at 2;00 PM, with an additional Saturday Matinee on October 26th at 2:00PM; show-times for the Redondo Beach Center For The Performing Arts will be at 1:00 PM on Friday November first, Saturday November 2nd at 2:00 PM and 8:00 PM, and 2:00 PM on Sunday, November 3rd. Plummer Auditorium is located at 201 E. Chapman Avenue in Fullerton CA. with plenty of free parking across the street from the theater; The Redondo Beach Center For The Performing Arts is located at 1935 Manhattan Beach Blvd. in Redondo Beach, California. Tickets for both locations can be purchased by calling (714) 589-2770 Extension 1 or by logging onto 3-D Theatrical’s website at: http://www.3DTshows.com . 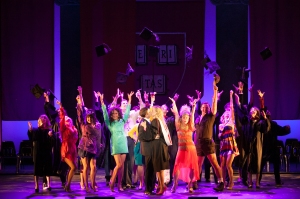