One ‘Mel’ Of A Show: MTW’s Regional Premiere Of “Young Frankenstein” Packs So Much Fun It’s Scary!

Mel Brooks’ ‘monster’ of a stage-hit based on his iconic 1974 film features all the classic lines and quips connected to some of the most hil-scare-iest numbers to be heard in any recent production to hit the Southland!

Long Beach has an acute and very green case of “Transylvania Mania”—as “Young Frankenstein, The Musical” makes its regional premiere as the triumphant season opener for Musical Theatre West’s sixty-first consecutive season. Mel Brooks’ ‘monster’ of a stage-hit based on his iconic 1974 film features all the classic lines and quips connected to some of the most hil-scare-iest numbers to be heard in any recent production to hit the Southland; the results are enough to urge audiences to run to the box office in time for this limited three-week run at the Carpenter Center For The Performing Arts in Long Beach California!

It’s 1934 and upon moving into his family’s forbidding “Castle Frankenstein” on the foggy moors of Transylvania Heights, young Doctor Frederick Frankenstein (–“that’s Fronkensteen” he snaps early on–) reluctantly (at first) attempts to complete his famous grandfather’s infamous work by bringing a hulking corpse back to life. Joined by a hunch-backed assistant Igor (pronounced “Eye-Gore”) a voluptuous assistant named Inga, the Castle’s ungainly housekeeper Frau Blucher (cue the horse whinny’s,) and Fredrick’s “adorable, mad-cap” (not to mention incredibly self-involved) fiancé Elizabeth, he does succeed in reanimating his ‘monster’; however, not without a series of riotous consequences which culminate with he and his ‘creation’ performing a nifty song-and-dance routine on-stage!

Susan Strohman’s original direction and choreography has been lovingly recreated here by Lauren Kadel. The “Don’t Touch Me” (the new dance-craze sweeping Catholic girls’ schools all over the Midwest) wherein couples waltz without ever actually latching onto one another, and the Act One finale, the “Transylvania Mania” (during which the monster breaks loose) are two clever nods to the old thirties-era movie-inspired dances like “The Continental” or “The Carioca”.  In fact. If Brooks’ previous theatrical outing “The Producers” paid homage to Broadway’s golden age, “Young Frankenstein” pays just as many compliments to the golden age of movies. Later in one of many other examples of inventive staging, the junior Frankenstein’s construction dances with his own enormous shadow (which turns out to be more adept with the fancy footwork than the creature himself!) Then again, the special effects—and there are several—serve the production, but never over power it! In the musical dream sequence, “Join The Family Business,” Fredrick’s late grandfather Victor appears urging his recalcitrant grandson to take up his life’s work, as the cast “build” a humongous monster on stage that is truly breath-taking to see. 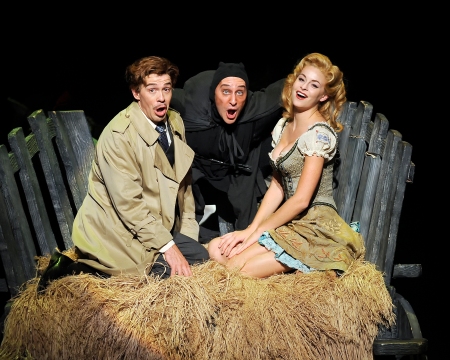 The book, equal parts Borsch-belt burlesque, vintage vaudeville and silver-screen shtick, is pure Brooks–even old jokes are given surprising new life here. It’s a bit campy, a bit bawdy and all entertaining, with the ending of this stage version having been necessarily built up from the movie, offering instead a humorous, coherent and even romantic closure for all the couples, rather than just relying on a simple series of cinematic sight-gags. Likewise, if the score ostensibly is lacking any notable ‘hits’, rest assured many of the tunes will stay with you in the best way possible long after you’ve exited the theater.

“Have you seen the well to-do, up and down Park Avenue?” Danny Blaylock as “The Monster” is “Puttin’ On The Ritz”

They include “Welcome To Transylvania” and “The Happiest Town In Town” (sung as Mad Scientist, Victor Frankenstein’s body is at last laid to rest,); the chorus also particularly shines in the Second Act opener, “He’s Loose” offering up terrific harmony. (Incidentally, Irving Berlin’s renowned melodic contribution,”Puttin’ On The Ritz” was met with particular enthusiasm opening night, having been expanded from a brief one-note bit into a full-fledged production number complete with a tuxedo-clad kick-line.) 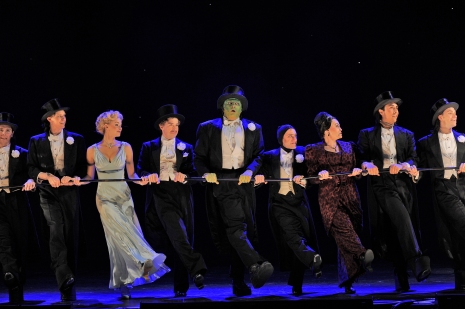 Zachary Ford has an amiable “Nathan Lane” like quality as Frederick Frankenstein and, given that he’s on stage a good 90% of the time, he effectively keeps on top of all the fast-paced (–even, sometimes, manic as could be expected of a Mel Brooks show) goings-on. Ben Liebert is “Eye-gore” whose constantly shifting back-hump is actually one of the funnier running puns. It is he who brings the doctor a brain mistakenly identified as having belonged to one “Abby-Normal” which may account for the monster’s hair-trigger personality! Similarly, while appropriately busty and flirtatious, Andi Davis as Inga is more the wholesome girl next door than a seductive siren, but she does possess a magnificent voice. Her best moments include “Roll In The Hay” (sung on the back of a ‘moving’ hay wagon) and the sublime “Listen To Your Heart”; moreover, Danny Blaylock is “a scream” as the proverbial ‘bull in a china shop”—aka “The Monster” of the title. 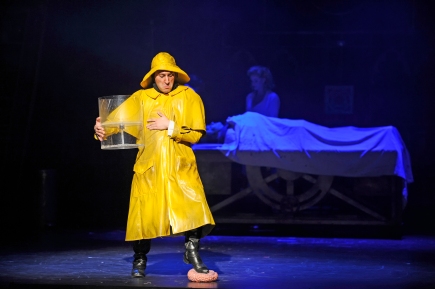 “OOPS!” Ben Liebert steps to it as “Eye-Gore”

Other standouts include MTW Veteran, Tracy Lore as Frau Blucher who garnered applause just by making her first entrance. In addition to her laudable vocal talents, Lore has pristine comic timing which is very much in evidence here. Her solo turn, “He Vas My Boyfriendt” is a genuinely side-splitting high point of the evening. Later she rebukes Frankenstein when his initial attempts to revive his pet-project look like they’ve failed, telling him “It worked for your Grandfather–and he couldn’t even sing!” Rebecca Johnson too, as the doctor’s intended, Elizabeth is a certified crowd pleaser seeming to channel all those great “too delicious” screwball comedy vixens of yester-year; if anything, it’s a pity she isn’t given more stage time, but she absolutely makes the most of it when she’s there! “Hug me ‘til I scream” she croons to Frederick at one point “–if it’s only in a dream, but please don’t touch me!” (–yeah, wonderful girl!) Also offering excellent support is Jeffrey Rockwell who pulls double duty as both Inspector Kemp (whose previous tangles with one of Frankenstein’s monsters cost him “an arm and a leg”—literally) and a blind, Jolson-esque hermit.

“Young Frankenstein” is that rare gem of a show whose only ambition is to amuse and entertain and this it does in grand style. Having opened on Friday, November first, it plays through Sunday, November 17th 2013. Curtain-times are Fridays and Saturdays at 8:00: pm with Saturday and Sunday matinees at 2:00 PM; added performance will be on Thursday, November 14 at 8:00 pm and an additional evening performance on Sunday, November 10th at 7:00 PM. Tickets for “Young Frankenstein’ may be purchased on-line at: www.musical.org or by phone at: (562) 856-1999 Ext. 4 (Group rates are available for parties of 12 or more) Tickets may also be purchased in person at the Musical Theater West Box-office between the hours of 12:00 PM-6:00 PM Tuesdays through Friday. The Box office is located at: 4350 East 7th Street, Long Beach Ca. The Carpenter Center on the campus of California State University Long Beach at 6200 East Atherton Street, in Long Beach California. 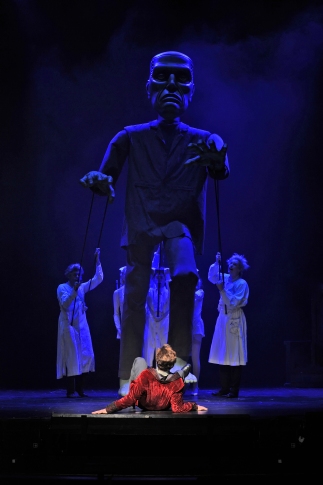 “It’s One ‘Monster’ Of A Hit”: Musical Theatre West’s Production of Young Frankenstein