‘Sinfully’ Funny: “The Book Of Mormon” Rings Your Bell With All The Right–And Funniest–Notes!

They’re on a mission—for big laughs! Satire doesn’t come any raunchier, wittier—or more on the money!

They’re on a mission—for big laughs! Fresh from San Francisco, the sensational cast of the second national tour of “The Book Of Mormon” stopped into the majestic Pantages Theater in Hollywood on Tuesday, January 21st  for an extended run! When the off-the-wall minds that brought us ‘South Park’ paired with the equally sharp-witted composer of the Tony Award winning ‘Avenue Q’, the result was this musical that many have described as “a rare theatrical farce…that cleverly pokes fun at such sensitive social topics as religion and race.” Featuring a book, music and lyrics by Trey Parker, Robert Lopez and Matt Stone, the production walked away with the 2011 Tony Award for best musical along with eight others including Best Score, Best Book, Best Direction and Best Scenic Design. Who knew a show about missionaries could prove so popular—or so damned funny!

“We can fully guarantee you, that this book will change your life” (The Cast Of The Book Of Mormon”)

“Long Ago,” we’re told (via the booming voice of God spoken by none other than a pre-recorded Trey Parker) the back story of the Mormons and their beliefs–starting with their ‘beginnings’ as a lost tribe of Israel that somehow had found their way to North America. Immediately after, we’re introduced to several fresh-faced young missionaries-in-training—and two in particular, “Elder” Kevin Price and “Elder” Arnold Cunningham. Price is pretty full of himself convinced of his own righteousness while his schlub-ish “missionary companion” is every bit the nerd he looks and, when pressured, isn’t above stretching the truth in order to get his point across. The pair is soon sent to Uganda in Africa (“Where is that?” Cunningham asks)—where they find a war and pestilence ravaged village full of starving locals who themselves aren’t above cursing God for the many hardships they face–or as they put it “Hasa Diga Eebowai” (“Having a saying makes it all better!” we’re told.) Once there, they meet ‘their ward’—a group of similarly minded Mormon boys. Not so much a bold “Army Of The Church” as kind of the “F-Troop” of missionaries (–F being for ‘Fabulous’–) they may try hard but aren’t converting anybody! 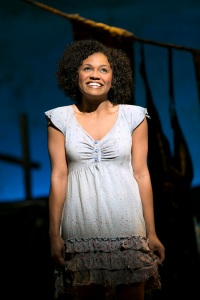 “Sal-Talay-Ka-Siti”:
Not just a story mama told, but a village in ‘Ooh-Tah’, where the roofs are thatched with gold! If I could let myself believe
I know just where I’d be: Right on the next bus to paradise–“Sal- Talay-Ka-Siti”!

As Elder Kevin Price, David Larsen is as wholesome as a tall glass of milk, gifted with an especially expressive voice. He effectively takes center stage in most of the group numbers, but his solo effort, “I Believe” is a definite crowd pleaser, as is “You And Me—But Mostly Me”. So too, Elder Price’s “Spooky Mormon Hell Dream” is raucously hilarious as he envisions every young red-blooded Mormons’ worst fears in the place of eternal fire.  Denee Benton too, is spot-on as the innocent, wide-eyed and waifish, “Nabalungi”–the idealistic African girl caught in some pretty severe circumstances. Among her best and surprisingly touching moments occurs with her number, “Sal-Talay-Ka-See-Tee” (Salt Lake City) wherein she dreams of better days for herself and those she loves by imagining a near impossible Utopia where “flies don’t bite your eye-balls and human life has worth.” Meanwhile Pierce Cassedy’s Elder McKinley is the most, well, let’s say ‘overtly ebullient’ ward-leader this side of the “Evergreen Conversion Therapy” ministry (“O.M. Gosh!” he exclaims upon hearing of Elders Price and Cunningham’s eventual successes with the villagers.) His big number is “Turn It off” in which he enthusiastically instructs the ward to literally tap their troubles away by repressing–via song and dance—any unwanted thoughts or emotions.

“Hello, My name is Elder Price –and I would like to share with you the most amazing book”

David Aron Damane also is a force to be reckoned with glowering over the entire proceedings as the evil “General Butt-Fucking Naked” (Yes, that’s what he’s called!) If there’s a scene-stealer though (in the best way possible,) it’s Cody Jamison Strand as Elder Arnold Cunningham. Strand does an awesome job leading the cast in “Man Up”–the First Act finale when Arnold decides if the villagers are to be converted, it’s up to him (no matter which stories he has to ‘alter’ to tell them,) as well as its second act follow-up “Making Things Up Again” as he imagines his father, Joseph Smith, and Jesus Christ all reprimanding him for not teaching “by the book” until ultimately, his fantasies (in the form of Yoda, Lt. Uhura and several refugees from “The Lord Of The Rings”) get the better of him again. If one can get past all the coarse-but-funny raciness, there is an underlying amiability to all the goings on that will definitely have audience members rooting for our young heroes because, (much like “South Park” has become famous for,) shining through it all are some great –even reverent–truths about this often misunderstood religion. “All American Prophet” and “I Believe” genuinely, (albeit with a healthy dose of playfulness,) sum up Mormon history and theology succinctly and in an entertaining way—so much so they should both be used as teaching tools by real missionaries! In fact, one quick perusal of the evening’s “Playbill” will reveal several ads placed by the LDS church advising “You’ve seen the play…now read ‘The Book’, encouraging audiences to use the show as a starting point to learn more about their actual faith.  Co-Directors Casey Nicholaw and Trey Parker keep the action fast-paced and involving, always managing to keep you guessing as to what’s going to come next. Moreover, Nicholaw’s expert choreography runs the gamut from rhythmic African tribal dances to a nifty tap line of Mormon missionaries, to a hard-rock hellish free-for-all featuring several dancing Starbucks coffee cups.

“When you get confused because of thoughts in your head, don’t feel those feelings-hold them in instead!”

One thing is also for sure: Parker, Stone and company have intensely studied the musical medium, and knowing eyes will recognize more than a few clever nods to such previous Broadway hits as: “The Lion King”, “Hairspray”, “Mamma Mia”, “The Little Mermaid” and even “The King & I”! Scott Pask’s impressive set designs look especially eye-catching contrasted against the ornate carvings that adorn the Pantages Theater’s lush and historic 2703 seat auditorium, while Ann Roth’s imaginative costumes utilize fiber optics to make sure our very Caucasian Lord (when he appears) incandesces appropriately, just as his underworld counterpart is commendably horned and menacing. Her inspired work also includes an African version of Joseph Smith and his fellow pioneers–and the boys’ “Magic” temple-garment underclothing makes a brief appearance too!

Satire doesn’t come any raunchier, wittier—or more on the money! “I believe” open-minded audiences will love it; so don’t wait for ‘Latter days’–get your tickets now! “The Book Of Mormon” opened Tuesday, January 21st and has been extended through May 11th 2014. It plays Tuesdays through Fridays at 8:00 PM, Saturdays at 2:00 PM and 8:00 PM and Sundays at 1:00 PM and 6:30 PM. The Pantages Theater is located at 6233 Hollywood Blvd. in Hollywood, CA. To purchase tickets, patrons should visit www.HollywoodPantages.com  or call 800-982-2787. 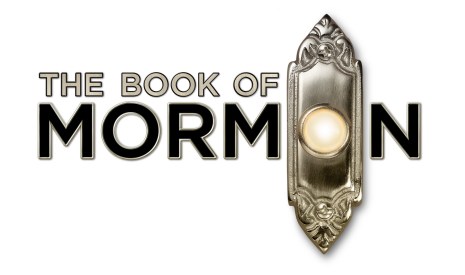 Productions Stills By Joan Marcus; Courtesy Of Boneau/Bryan-Brown And The Nederlander Organization; Theater/Marquee Photo By Jarod Milsap. Special Thanks To Benny Aguayo, Jarod Milsap And The Company Of “The Book Of Mormon” For Making This Story Possible.

2 thoughts on “‘Sinfully’ Funny: “The Book Of Mormon” Rings Your Bell With All The Right–And Funniest–Notes!”