Hear The People Sing: McCoy-Rigby Entertainment’s Triumphant “Les Miserables” Is A ‘Dream’ Of A Musical In La Mirada, CA. 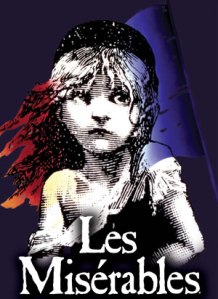 When is the last time you were at a show after which the audience couldn’t get to their feet fast enough to offer up a thunderous and well deserved standing ovation? Yet, that’s precisely what McCoy-Rigby Entertainment and “The La Mirada Theatre For The Performing Arts” in La Mirada California, have produced as they conclude their stunning 2013-2014 season with the Classic “Les Miserables”. Totally sung through, this winner of the 1987 Tony Award for Best Musical is based on the novel by Victor Hugo and features music by Claude-Michel Schonberg and lyrics by Herbert Kretzmer. In the capable hands of Director Brian Kite this new re-staging offers a more coherent and accessible ‘representational’ version, complete with fuller sets as opposed to the original’s more ‘presentational’ take which occasionally obscured the time and locales of the events taking place.

Set in France during the early years of the nineteenth century, the story details parole-breaker Jean Valjean’s quest for salvation through tumultuous times while trying to ensure his adopted daughter’s happiness. The story opens in Toulon Prison in 1815 where Valjean is an embittered man having been sent there for 20 years for stealing a loaf of bread to feed his sister’s starving children. Later, he has a change of heart after a Bishop (whom he tried to rob) offers him kindness. Flash forward then to 1823 and our hero has turned his life around, and under an assumed name has risen to become a prosperous factory owner and Mayor of Montreuil-Sur-Mer (but his new identity comes with a price—which requires him to keep his convict past hidden, particularly from his beloved daughter Cosette and her fiancée, Marius) Act Two picks up right where the first left off on the streets of Paris 1833, as a student led street rebellion is in the offing, wherein a band of student revolutionaries—including Marius– create a barricade to challenge the local establishment. In order to watch over the lad, Valjean arrives at the barricade where he comes face to face with his long time pursuer, Inspector Javert, but when the occasion arrives that he might finally put an end to his old nemesis, he instead offers life-saving forgiveness.  “Les Mierables” is one of the few musicals in recent memory that offers such forceful moments of true drama, and the cheers come fast and frequently with this particular production. Every one is well-earned.

“At the end of the day” is the first production number that really showcases the entire ensemble, allowing us to, at last, grasp what an incredible—and talented–group they are! Each is the backbone on which this production lies. The trouble with trying to choose who stood out among the featured players in the cast is that they all, in their moments, are so impressive. However, James Barbour couldn’t be better cast as Jean Valjean. His inspired and accomplished handling of two of the key numbers in the piece, Valjean’s “Who Am I” and the iconic “Bring Him Home” could be worthy reason to rush out and see this one alone. Similarly, Jeff Skowron and Meeghan Holaway are collectively brilliant as the scheming couple, M. and Mme. Thenardier. Their hilarious “Master Of The House” injects the serious proceedings with a shot of ‘bad-natured’ joviality just when it’s needed (plus it offers yet another shining opportunity for the chorus to amaze.) Season four “American Idol” alum, Anthony Fedorov also puts his laudable voice to exceptional use as Enjolras. the leader of the student revolutionaries and particularly shines in “The Red And The Black” and “Do You Hear The People Sing?”.

Other co-stars include Cassandra Murphy as the luckless waif, Fantine, whose poignant “I Dreamed A Dream” is absolutely dynamic—and oh what a wondrous voice this young lady has! Likewise, young Jude Mason as the plucky street urchin ‘Gavroche’, possesses a voice that way outsizes his diminutive stature which he puts to great use in the service of “Look Down” and “Little People”—this latter wherein, he exposes Inspector Javert—now a high-up with the Paris Police, as a spy. Speaking of the relentless Inspector, Randall Dodge provides the role with the proper seething, repressed passion it requires, while his rich, full, baritone is well showcased in the Act One soliloquy, “Stars” during which we learn of his absolute belief in ‘the law’ and his commitment, not so much to be ‘just’, but instead unquestioned! So too, while Nathaniel Irvin and Kimberly Hessler are easily the most likable on-stage couple as Marius and Cosette, it’s Irvin’s touching duet with Valerie Rose Curiel as the ill-fated Eponine, titled “A Little Fall Of Rain” that is likely to bring tears to your eyes. Later, Irvin scores another heart-felt bulls-eye with “Empty Chairs At Empty Tables” as he mourns his deceased friends lost at the barricade.

“Master Of The House, isn’t worth my spit…” Jeff Skowron & Meeghan Holaway are M. & Mme. Thenardier

Kite’s direction keeps the action flowing nicely without losing any of the necessary intensity the story requires, while the choreography (largely minimalized in the initial Broadway outing) is by Dana Solimando. Although her contribution here chiefly takes the form of lively staged production numbers with only a few bona fide ‘dance interludes’, her equally fine work nonetheless does add a shot of vivacity to what again could other-wise be some pretty heavy-handed goings on. Cliff Simon’s period-setting scenery too, offers a better perspective than has been seen in previous incarnations. For instance, his ‘Barricade” clarifies that the students’ big ‘revolutionary’ exploit is really just a minor street action and only one (albeit pivotal) moment in the lives of Valjean and his contemporaries. Special kudos also go to Musical Director John Glaudini, whose 12 piece orchestra sounds like many more–one whose evocative tones too, create a sense of scope, pathos, romance, and where appropriate, musical grandeur.

The very best of this (or any other) season, chalk up still another milestone for the award-winning McCoy-Rigby Entertainment. After previewing on Friday, May 30, 2014, “Les Miserables” opened on Saturday, May 31st and will run through Sunday, June 22, 2014.  Curtain-times are 7:30pm on Wednesdays & Thursdays; 8pm on Fridays; 2pm and 8pm on Saturdays; and 2pm on Sundays. There will be added performances on Sunday, June 15 and 22 at 7pm, and special “Talkback” sessions with the actors after final curtain will be held on Wednesday, June 4 and Wednesday, June 18. Tickets may be purchased at La Mirada Theatre’s website at: www.lamiradatheatre.com or by calling the La Mirada Theatre Box Office at (562) 944-9801 or (714) 994-6310. (Student, Senior and group discounts are available.) So don’t wait “one day more”—“The La Mirada Theatre For The Performing Arts” is located at 14900 La Mirada Boulevard in La Mirada, (near the intersection of Rosecrans Avenue where the 91 and 5 freeways meet.) 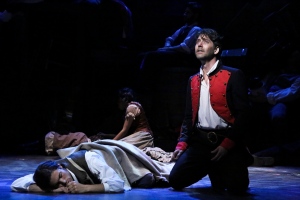 “Bring him peace, bring him joy…he is young, he is only a boy” Valjean prays for Marius at the Barricade

3 thoughts on “Hear The People Sing: McCoy-Rigby Entertainment’s Triumphant “Les Miserables” Is A ‘Dream’ Of A Musical In La Mirada, CA.”