Oh What A Show! Audiences Have Fallen To The Charm Of One More Production’s “Evita” In Garden Grove, CA.

Stand Back Southern California—because ‘One More Productions” is offering up their own ‘touch of star quality’ with their latest production of “Evita”! Fresh on the heels of their successful restart for musical performances at Garden Grove’s historic “Gem Theatre”, the resident company now presents this winner of the 1980 Tony Award for “Best Musical” featuring a book and lyrics by Tim Rice and music by Andrew Lloyd Webber.

“Argentina has gone to town, over the death of an Actress called Eva Peron”

Relating the passionate and unforgettable true story of Argentine First Lady Eva Peron, this completely ‘sung-through’ show features some of theater’s most inspiring songs in recent memory, including “Don’t Cry for Me Argentina”, “Another Suitcase in Another Hall”, “High Flying, Adored”, “On This Night Of 1000 Stars” and many others. It all begins in July 1952 in a Buenos Aires movie theatre where the picture is interrupted by the announcement that Argentina’s first lady and guiding spirit, Eva Peron has “entered immortality at 20:25 hours this evening.” Flashback then to Junin fifteen years earlier where we witness young ‘Eva Duarte’ as she uses her razor sharp instincts and raw charisma to meteorically rise from the slums of Argentina into the presidential mansion as the wife of President, Juan Peron. Adored by her people as a champion for the poor, Eva became one of the most powerful women in the world, even as her ambition, greed, and ultimately, fragile health, made her one of the most tragic. 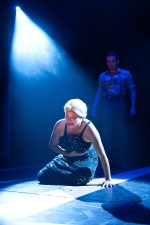 “Oh, what I’d give for 100 years, but the physical interferes” (Adriana Sanchez as Eva with Danny Diaz as Che)

Capably aided by Assistant Director Tad Fujioka (who also appears in the cast) “One More Productions” co-founder Damien Lorton serves double duty as both the show’s Director and Musical Director, while fellow co-founder Nicole Cassesso serves as Producer. Lorton’s direction is forceful and flowing, though he manages to keep things subtle and subdued in the early scenes which, much like the personal growth depicted of Eva herself, allows the energy to gradually, steadily, build and ‘mature’ until it “bursts forth”, taking you by surprise. More unique still is that both Lorton and Fujioka confide how they really worked with their cast to enable the subtext of each song to shine through beyond the words and melodies being sung. This extra effort is easily apparent and the overall production benefits immensely from it. So too, special applause goes to Wally Huntoon’s versatile utilitarian sets and Jon Hyrkas’ evocative lighting—both so important to a show like this where the action is fluid and ever changing, and each effectively provide these proceedings with some (colorful) sense of scope and (where required) stateliness.

In the title role, Adriana Sanchez literally hits all the right notes, steps and emotions! It’s not until her first number opposite Peron however, that she really lets loose with her complete vocal firepower—and then oh, how powerful she is. Here’s where she really comes into her own, save for the one earlier exception being her adept handling of “Good Night And Thank You…” which similarly builds little by little as Eva’s star rises incrementally higher on her way to becoming “The lady of them all” with each successive man she uses and then discards. Sanchez also excels with the iconic “Don’t Cry For Me Argentina” and immediately after with her part in “High Flying Adored”—indeed, the two numbers are like a delightful back-to-back melodic one-two knockout punch in the second act. Moreover, her “Don’t Cry For Me” reprise (aka “Eva’s Final Broadcast”) and closing soliloquy, “Eva’s Lament”, rank as among the evening’s most touching moments. 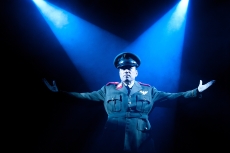 “Politics-The art of the possible!” (Chris Peduzzi is Juan Peron)

Meanwhile, Danny Diaz’s ‘Che Guevara’ is nicely understated and sardonic—this is a younger ‘pre-revolutionary’ take on the man who would grab plenty of headlines of his own later on. Diaz makes a fine narrator and scene-setter, and his accomplished treatment of the show’s stirring opening “Oh, What Circus”, as well as more than holding up his end of the surreal “Waltz For Che And Eva”, are among his finest numbers in an evening full of them. Not only that, he also has plenty of opportunities to prove just how gifted a dancer he is—leading many of the group endeavors here. Likewise, Chris Peduzzi as Juan Peron possesses a booming voice which he makes terrific use of in the service of “A New Argentina” and his half of the Peron-Evita duet, “I’d Be Surprisingly Good For You”. Even Peron’s introduction, “The Art Of The Possible” is equally striking—staged as a game of elimination where, in the end, only one man is left standing.

“Who am I who dares to keep his head held high while millions weep?” (Danny Diaz is Che Guevara)

Then again, all of Shauna Bradford-Martinez’s impressive choreography is like a big glittery exclamation point to the entire on-stage goings-on, bestowing more dancing than has been seen in previous incarnations of this, or really any of Andrew Lloyd Webber’s productions. Her staging of “Good For You” is particularly clever: As Eva and her soon-to-be-steady, Peron ‘demurely’ stand at opposite sides of the stage, Che enters at intervals dancing a sultry tango with numerous partners, so by the time the song reaches its climax, there is a chorus full of girls on stage ready to bring the newly paired (and now together center stage) couple’s point resoundingly home. Ms. Bradford-Martinez’s work also makes Act One’s kinetic rouser “Star Quality”, and her high-energy dance interlude at the center of “Rainbow High” (–which itself elevates the second act’s already dynamic forward momentum) absolutely A-Plus too!

This is one ‘Grande-sized’ musical audiences will want to be a part of! Located at 12852 Main Street in Garden Grove, (just moments away from Garden Grove’s 22 Freeway) “The Gem Theatre” recently underwent a major reconstruction, adding a brand-new state of the art sound system (which makes its debut with this production,) newly refurbished theater seats, and a larger, reconfigured stage. Having previewed Thursday, June 26th and Friday June 27th, “Evita” opened Saturday, June 28th and will run through Sunday, July 20th; Show-times are 8:00 PM Thursdays, Fridays and Saturdays, with Sunday Matinees at 2:00 PM (special $10 student rush tickets are available for Thursday and Friday performances, with no performance on Friday July 4th) For more information or to purchase tickets, call “One More Productions” at (714) 741-9550, ext. 225, or visit their website at: www.onemoreproductions.com.

“I’m their Saviour–that’s what they call me, so Lauren Bacall me, Anything Goes!”