What happens when the lights go out one hot 4th of July weekend in the urban neighborhood of Washington Heights in New York City? That’s the premise of “In The Heights”—the winner of four 2008 Tony Awards (including “Best Musical”) presenting some thoroughly ground-breaking work by the Tony Award-winning (and Pulitzer Prize Finalist) Composer-Lyricist Lin Miguel Miranda and a book by Quiara Alegria Hudes. A contemporary hit with timeless—and universal—themes that speaks to all ages and cultures, the show features a Grammy award-winning score comprised of Hip-Hop, Jazz, Pop, Salsa, Rap, and Merengue that serves as the backdrop for a community with dreams of succeeding in America while at the same time holding onto their culture and heritage.

Joshua Lopez as Usnavi welcomes us “In The Heights”

A potent reminder of the importance of chasing one’s dreams, finding where you belong, and always having ‘home’ to come back to, the true brilliance of Hudes’ book lies in the way it balances several subplots which ultimately combine to become the master story without diminishing any of them. The Chance’s staging offers a more intimate take on this Award-winner than has been seen before and the show, in many ways is actually strengthened by it. Moreover, in dispensing with the omni-present “George Washington Bridge” of the original, they’ve opened up the ‘universality’ of the story. This could be any neighborhood, and the joys and problems could pertain to any culture. Such intimacy also enables the cleverness of Miranda’s lyrics (often lost in larger productions,) to really shine through. Directed by ‘The Chance’s” Artistic Director, Oahn Nguyen and Choreographed by “Resident Artist” Kelly Todd, the show marks a reunion of sorts for the pair who once again are working together for their ninth successful time. In addition, Ryan Brodkin’s sound design is perfect–and perfectly complements Bradley Kaye’s impressive, compact-but-evocative scenic design and Martha Carter’s vibrant, multi-hued lighting design.

“Piragua, Piragua, So Sweet And Nice”: Julio Arroyo is “The Piragua Guy”

Upon entering the Chance’s new and expanded venue, the audience is greeted by an inner-city ‘Avenida’ facade encompassing the businesses “Rosario’s Car Service”, “Daniela’s Beauty Salon”, and in the middle, the “De La Vega Bodega”–a small convenience store where members of both businesses and the surrounding apartments all make their morning pilgrimages for coffee, snacks and the morning paper. The shop is owned by “Usnavi De La Vega”– a genial everyman from the Dominican Republic with a talent for ‘rap songs’ who, we’ll come to discover, was named after the first thing his parents saw upon entering New York harbor after emigrating from their home. Seeing a large imposing ship with the words “U.S. Navy” emblazoned across it, they reasoned the owner of the ship must be quite important, thus his peculiar name (“I worked with what they gave me,” he sighs self-deprecatingly.) Usnavi serves as our narrator and guide, leading the entire company in the sultry, rhythmic opening “In The Heights” where we learn the basic truth about all those we will encounter: “Everybody’s Got A Job, Everybody’s Got A Dream”. Also among the many twists and turns the plot is overflowing with, this particular weekend also marks the sudden return of ‘Nina Rosario”, the first person on the entire block to go away to college and the daughter of Kevin and Camila Rosario, owners of the local car service company. 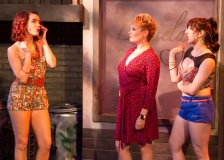 Nguyen’s direction literally keeps things ‘hip-hopping’ from one storyline to the next, juggling many complex story elements while providing each one with their required time and attention without ever letting things drag. Todd’s masterful Choreography serves a kind of zesty nexus connecting one scene to the next. Indeed, her vivacious, uber-kinetic dance numbers rate a special ovation all their own! ”In The Heights” is one of “The Chance Theaters” largest ensemble shows to date (second only to their 2012 award winning “Westside Story”) and the entire cast work in unison as a well-oiled machine. “Carnaval Del Barrio” is a terrific, spirit-raising group-enterprise, while “No Me Diga” (“Tell Me Something I Don’t Know”) sung by the ladies of Daniela’s Salon is also first-rate and hysterically funny—a genuine Act One highlight. Not to be overlooked is the bouncy “Piragua Song” led (appropriately enough) with liveliness and enthusiasm by Julio Arroyo as “The Piragua Guy”—a street vendor selling the cool Puerto Rican treat made from shaved ice. This stands as a bona fide crowd pleaser in an evening full of them. Then again, it’s the lighter moments like these, which make the more weighty one all the more impactful. As the first act races toward its unexpected climax, the number “Fireworks” serves as the longest ‘musicalized’ sequence in the entire piece and its most boldly dramatic–commencing at a local nightclub before a city-wide power outage throws everything into near chaos. 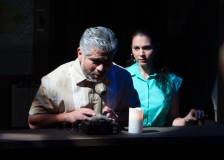 As for the equally talented cast, this one boasts one great performance on top of the other. Like his store, at the center of the action is Joshua Lopez as “Usnavi De La Vega”. Lopez’s triumph lies in how effortless he seems in handling some very tricky elements. He’s the one through which all the action unfolds, and exudes a laid-back ease as he takes on the tasks of narrator and cultural interpreter, “Illuminating the stories of the people in the street” while staying empathetic and always interesting. We’re genuinely involved in all the on-stage happenings because he makes it so easy for us to be (–add to it, he can also rap like a ‘Def Jam’ star to boot!) Usnavi, we learn, is secretly in love with Vanessa—a pretty young beautician at the parlor next-door. As the object of his affection, perky Chelsey Baldree does an outstanding as an unlikely Barrio “Girl Next Door”—with just the right dashes of spice when needed! Likewise Julia Cassandra Smith’s “Nina” is an angel-faced firecracker with an awesome voice. Her opening salvo, “Just Breathe” in which she contemplates breaking the news to her parents and friends that she’s had to drop-out of Stanford, is A-Plus; however, her part in Act Two’s “Alabanza” (“Praise”) is not only her most powerful moment, it ranks among the most heart-rendering of the entire show. Joining her as Nina’s potential new Boyfriend, “Benny” (an ”Honorary Latino” we’re told, for his conscientious and faithful employment by the Rosario’s) Charles McCoy too, has an incredible depth and passion—not to mention a booming voice that will knock your socks off! He and Smith make a most engaging and certainly melodic couple. 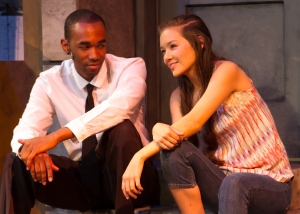 Meanwhile, Candida Orosco’s “Abuela Claudia” is nothing short of a revelation with the vocal clout to match! If Usnavi and Nina represent the heart and fortitude of the show, hers is the soul. She particularly scores with “Paciencia Y Fey” (“Patience And Faith”) which takes us into the mind and memories of this elderly woman, now slightly stunned at discovering she’s just hit the lottery to the tune of $96,000. After a lifetime of struggle, she poignantly recalls her girlhood in Havana Cuba before moving up to “Nueva York” in 1943—effectively touching on elements inherent to every immigrant’s experience. Also offering fine support is Tony Sanchez as Kevin Rosario. His soliloquy (after hearing his daughter’s news) titled, “Inutil” (Spanish for “Useless”) is potent and touching, and Rachel Oliveros Catalano as his wife, “Camila” similarly commands the stage with her delivery of “Enough!” during which she –and in no uncertain terms—informs her daughter that “when times are tough, you don’t run and hide alone—you come HOME!” This, in fact, is the main signature of the entire piece.

Recently named “The Official Resident Theater Company Of Anaheim” by the Anaheim City Council, The Chance Theater At The Bette Aitken Arts Center is located at 5522 E. La Palma Avenue, Anaheim, CA. Having ‘Previewed’ Thursday, July 3rd through Thursday, July 10th, “In The Heights” will play through Sunday, August 10th. Show-times are Friday and Saturday evenings at 8:00 PM, and Sundays at 2:00 PM and 7:00 PM. Tickets may be purchased by calling (714) 777-3033 or by logging onto: http://www.ChanceTheater.com .

The Cast Of “The Chance Theater’s” “In The Heights” Celebrate “Carnaval Del Barrio”!

Production Stills By Doug Catiller of “True Image Studio” (www.TrueImageStudio.com) Courtesy Of “The Chance Theater”; Special Thanks to Casey Long, Oahn Nguyen, Kelly Todd  & to the Cast and Crew of Anaheim California’s “Chance Theater” for making this story possible.