Hot Flash: Guest Star Cindy Williams Stops By The Laguna Playhouse For A Short Spell With “Menopause: The Musical”!

Women of all ages will want to see this unique evening of theater—as well as any men who want to understand them better! Linders explores her subject with equal parts humor and integrity, and her script is laden with plenty of big belly laughs; furthermore, her genuinely clever song parodies effectively achieve what they set out to do: educate while entertaining. 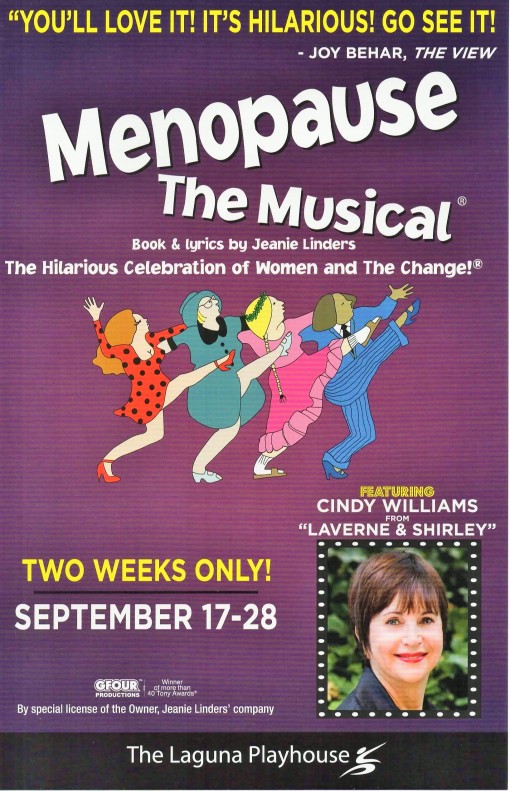 Had it with mood-swings, Midol and Merlot? Then head on down to the “Laguna Playhouse” in Laguna Beach California, where Cindy Williams, the multi-talented star of the classic TV series “Laverne And Shirley” and such films as “American Graffiti” and “The Conversation”, is making a “Special Guest Appearance” in “Menopause: The Musical”! Having entertained audiences in more than 450 U.S. cities, nearly 300 international cities, and a total of 15 countries “Menopause: The Musical” is now in its thirteenth year of production world-wide, produced by G-Four Productions. Reports are that Cindy felt especially moved that the production company will be donating a portion of the revenues from this engagement to “The Susan G Komen Foundation”—the non-profit organization dedicated to finding a cure for breast cancer as well as to raising awareness and funds for research, education, advocacy, health services and social support for women in over 50 countries! 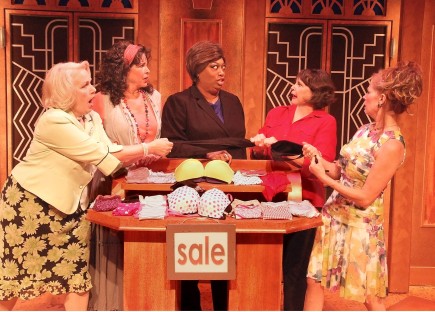 Created by Jeanie Linders, who also wrote the book, “Menopause: The Musical” proves laughter and song really are the greatest medicine—but it also provides audiences with the perfect opportunity to raise awareness about this natural, inevitable, but often misunderstood phase of a woman’s life. Indeed, women of all ages will want to see this unique evening of theater—as well as any men who want to understand them better! Linders explores her subject with equal parts humor and integrity, and her script is laden with plenty of big belly laughs (–always managing to inject plenty of irreverent ‘hormonal humor’ into the driest places!) Furthermore, her genuinely clever song parodies, effectively achieve what they set out to do: educate while entertaining—and entertain they do with such witty verses as “I heard it through the grapevine, you’ll no longer see thirty-nine” (sung to the tune of–what else?! “I Heard It Through The Grapevine”!) Notable too, is how perhaps the real strength in her parodies’ successes lie in the very choices of songs she’s chosen to send-up while getting her point across. Most are taken from iconic hits that practically defined their various generations. Surely all are relatable–from the ardent reactions of agreement from the largely female crowd on opening night, it’s obvious that the vast majority of jokes were hitting their intended targets.

Offering not so much a full-on plot as a steady unwinding of events throughout the 90-minute production, five women have a chance meeting in the Lingerie Department of New York City’s famous “Bloomingdales”. Vastly different “types” from very different walks of life, one is a no-nonsense businesswoman, one is a somewhat conceited Actress on a Soap Opera (who’s secretly trying to hold on to her illusions of youth), another is an aging, but good-natured Hippie, while another is a wide-eyed housewife visiting from a small town in Iowa (…and of course, rounding out their quintet is Cindy Williams.) Noticing unmistakable similarities among one another, they share quips and light-hearted jibes about all their hot flashes, mood swings, memory loss, weight gain and ultimately something much more–and far deeper. Performed without intermission, what follows is a laughter-filled celebration overflowing with scintillating satirical songs based on vintage pop anthems from the ‘60s, ‘70s and ‘80s. 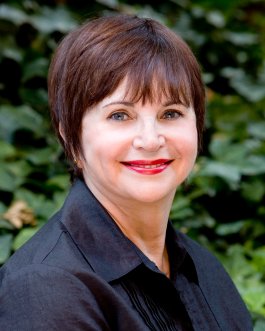 Cindy Williams “Has A New Attitude” In G-Four Productions’ “Menopause: The Musical”

Although she was initially set to play a larger role, due to a sudden illness during rehearsals, Ms. Williams instead makes numerous comic appearances—popping in and out of the goings-on, but always with some terrific laugh lines or hilarious sight gags. Yet, even if she’s not exactly the “leading player” here, it is safe to say she’s like the sharp and sassy cherry atop this very fulfilling Sundae. Others featured in the vibrant and enthusiastic cast include Sandra Benton as “The Businesswoman”, Beth Buczkowski as “The Soap Star”, Marsha Waterbury as “The Hippie” (or “Earth Mother”) and Roberta B. Wall as “The Iowa Housewife”. Directed by Seth Greenleaf, the pacing is quick–jamming more than 22 guffaw-inducing melodies (many of them presented in conjunction with several others) into the evening. Making all these numbers stand out still more is the stylish choreography by Daria Lynne Melendez, recalling the best moves of Motown, Disco, Honky-Tonk and many other rhythmic modes and milieus. A large, sleek, department store backdrop serves as the many locations the festivities are played against serving, at turns, as a lady’s room (–where they all seem to spend an awful lot of time in–), the store’s tea-room, as well as the different floors and departments; simple, but suitable—particularly when combined with Ryan A. Partridge’s inventive lighting design, these elements could be considered to be like two whole separate characters in and of themselves.

The action gets off to a blazing start as the ladies sing “Change-change-change—Change Of Life” in a jivey burlesque of Aretha Franklin’s classic, “Chain Of Fools”. Led by Ms. Benton, who shows off her considerable vocal abilities early on and throughout, she does a similarly impressive job with “I’m Flashing” (a side-splitting take-off of Brenda Lee’s “I’m Sorry”.) Later, she doesn’t put a foot (or note) wrong with her dead-on impression of Tina Turner singing “What’s Love Got To Do With It?” Ms. Buczkowski likewise does a remarkable solo turn with the splashy, “I’m Having A Hot Flash!” (That itself is a delectable parody on Irving Berlin’s incomparable “We’re Having A Heatwave”) during which she carols forth such priceless lines as “My personal summer is really a bummer”; Buczkowski also scores with “Please Make Me Over” (sung to Dionne Warwick’s 1962 hit “Don’t Make Me Over”) demonstrating that she too, is a vocal force to be reckoned with. Not to be out done though, Ms. Waterbury and Ms. Williams garner huge laughs with their duet, “Puff, Good God I’m Dragging”–a brilliant reworking of Peter Paul & Mary’s “Puff, The Magic Dragon”, sung here as an ode to slowing down with age. 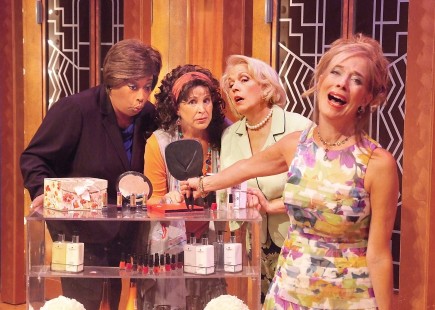 Beth Buczkowski & Co. Are “Havin’ A Hot Flash, Comes On Like A Car Crash!”

Each performer has her own individual moments to shine, but it’s as an electrifying ensemble that the show really gels. Collectively, they mine comedic gold all through the evening, but their “Beach Boys Medley”—featuring such memorable lampoons as “I wish we all could be sane and normal girls” and “Thank you doctor, (thank-thank you doctor)” is a bona fide crowd-pleaser, as is “My Husband Sleeps Tonight” (–a buoyant take-off of “The Token’s” 1961 chanson, “The Lion Sleeps Tonight”.) However, it’s when the group launched into a send-up of the Platter’s “The Great Pretender” that the crowd really meted out their wholehearted applause! Meanwhile, at the other end of the emotional spectrum, “I’m No Babe, Ma” (better known in its Top 40 incarnation as Sonny and Cher’s unforgettable “I’ve Got You, Babe”) is a surprisingly touching sonnet-in-song to mothers treating their grown daughters like children.

Now there’s no need to ‘ovary act’ because it’s definitely NOT the ‘silent passage’ anymore–thanks to this A-Plus cast and such a quick-witted, insightful, and thoroughly enjoyable musical! After previewing on Wednesday, September 17, “Menopause: The Musical” opened on Thursday, September 18 where it is set for a special limited two-week run through Sunday, September 28, 2014 at the Laguna Playhouse located at 606 Laguna Canyon Road in Laguna Beach, CA. Show-times are Tuesday through Saturday evenings at 7:00 pm, with matinees on Thursdays, Saturdays, and Sundays at 2:00 pm. Tickets may be obtained by phone at (949) 497-ARTS (2787) or by logging onto: www.lagunaplayhouse.com ; (Group Discounts for parties of ten or more are available by calling 888 686-8587 ext. 2.) 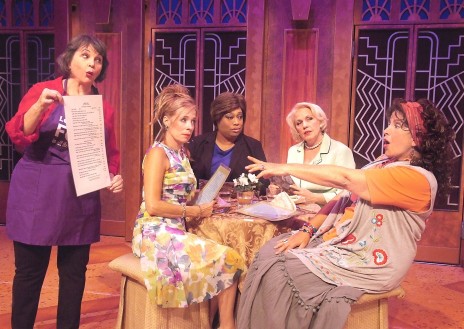 “We Were Going To Change The World; Now, ‘Change’ Has A Whole New Meaning!” The Cast Of “Menopause: The Musical” At “The Laguna Playhouse”, Laguna Beach CA.

Production Photos By Ed Krieger, Courtesy Of Demand PR (www.demandpr.com) Special Thanks To David Elzer At Demand PR And To The Cast & Crew Of G-Four Productions’ “Menopause: The Musical” For Making This Story Possible.

3 thoughts on “Hot Flash: Guest Star Cindy Williams Stops By The Laguna Playhouse For A Short Spell With “Menopause: The Musical”!”