Simple And Somehow Sublime: 3-D Theatricals Rides “On The Wheels Of A Dream” With Their Rousing– 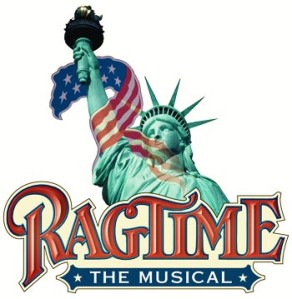 “It was the music of something beginning, an era exploding, a century spinning–in riches and rags, and in rhythm and rhyme…and the people called it ‘Ragtime’.”

The Cast Of “3-D Theatrical’s” “Ragtime, The Musical”

“The wheels are turning” for 3-D Theatricals at the landmark “Plummer Auditorium” in Fullerton California, as they cap off their dynamic “Ovation-Award Nominated” 2014 season with “Ragtime”! Based on E. L. Doctorow’s epic novel of the same name, this outstanding new production features a cast of 45, 19 musicians, and a Tony Award-winning score by Lynn Ahrens and Stephen Flaherty. Painting a powerful portrait of turn-of-the-century America, “Ragtime” intertwines the stories of three diverse families—each from a different socio-economic and racial strata of society. As the haunting refrain of the opening number is sounded, the actors take the stage introducing themselves between verses: first, the upper-class white people enjoying a rather sheltered “Belle Epoch” that this time is often referred to, in suburban New Rochelle; next, people of color up in Harlem getting their first taste of freedom and all the jubilation, bigotry and hardships that brought with it, and finally, Eastern European immigrants trudging in from the docks, dazed and exhausted but still hopeful at the prospects their new homeland might hold. Set against a background of factual historical headlines involving such celebrated (and sometimes infamous) personages as Henry Ford, Booker T. Washington, Emma Goldman, Harry Houdini, Stanford White, Evelyn Nesbit and Financier J.P. Morgan ( “Look up to me and see what money is worth!” He tells the crowd as he gazes down on them,) these figures similarly appear and introduce themselves, before going on, in some way, to touch the lives of the main characters. Indeed, the wonder of the book by the multiple-award-winning playwright, Terrance McNally is the way it incorporates historical fact with the fictionalized characters—sometimes fairly subtly. If someone is encountered during the course of the plot, there’s a better than average chance that person actually existed!

Jeanette Dawson Is The Notorious “Girl On The Swing”, Evelyn Nesbit

At the center of all the happenings (literally and figuratively) is a family known only as “Father”, “Mother” and “Little Boy”; There’s also “Mother’s” relatives who also share their rambling house in New Rochelle, known appropriately as “Younger Brother” and “Grandfather”. Their story-line connects all the others. One day, while father is away on an expedition north with Admiral Peary, “Mother” finds a foundling child when puttering in her garden, and decides to take it into her home. Calling the authorities they quickly find the child’s mother—a poor black washer woman named “Sarah”, who in her desperate and  ‘unfortunate condition’ didn’t know what to do, and “Mother” takes responsibility for her as well. Meanwhile, in another part of the city, the recently arrived immigrant “Tateh”–a Latvian Jew (who, we’re told, was given a name he couldn’t pronounce so he goes by this,) is struggling to make a living as a silhouette artist in hopes of making a better life in America for himself and his young daughter (referred to only as “Little Girl”.)

Then there’s Coalhouse Walker Jr. –a stylish black musician whose talents have gained him some fame and material wealth. The father of Sarah’s child, he comes looking for her, longing to win them both back. High spirits are short-lived though, when his car is desecrated in the vilest ways possible by a band of jealous white volunteer firemen, which brings things to a head. Postponing his marriage to Sarah until justice is served and his car is restored, she sets out to seek justice on his behalf; however, when the local authorities are of no help in gaining them justice and restitution, she tries to plead their case to the visiting Vice-Presidential candidate, but (in that President McKinley’s 1901 assassination is still a recent, bitter memory,) the Secret Service over-reacts, mistaking her innocent enthusiasm for a threat and fatally beat her, bringing the first act to a close amid raw and genuine emotions. After Sarah’s funeral, Walker is a changed man—now a serial arsonist and killer, hell-bent on revenge, and the second act pretty much follows his city-wide terror spree (and the impact it has on the other characters) until it reaches a melodramatic and gripping climax at the illustrious “Pierpont Morgan Library”.

Given a company so large and so many story-elements to balance and juggle, “Ragtime” is anything but an easy show to direct; happily, that task has fallen to “3-D Theatrical’s” Executive Producer T.J Dawson, who valiantly keeps the action flowing—not so fast paced that anything gets overlooked (he even slows things down for the more poignant moments to get their full due) but never allowing things to drag either. His efforts are adeptly assisted by Dana Solimando’s widely-varied choreography, which adds so much to the overall enjoyment of the production because there are some heavy issues being explored and not every one can come to a cheerful conclusion. “A Shtetl Iz Amereke (In America)” led by “Tateh” with the other immigrants is a stunning example of the diverse terpsichorean styles employed here, as is the jivey, animated, “Get Ready Rag” that segues into the more deliberate ‘utilitarian’ moves of “Henry Ford”. This introduces us to the legendary Captain of Industry who proclaims “Every worker is a cog in motion—that’s the motion of ‘Henry Ford’!” as they build what will become Walker’s most prized (and envied) possession: his Model T automobile! (Incidentally, the car is a wonder in itself—one of the most awe-inspiring props “3-D Theatrical’s” has ever acquired for a show, it significantly increases the production’s overall ‘wow’ factor–of which there is plenty!) By the same token, “Let’s Run Away To Atlantic City” (during which we discover that “Tateh” is now a prosperous Director of moving pictures—calling himself “Baron Ashkenazy”) not only lifts the sudden gravity of the second act, it also gives the ensemble one more opportunity to dazzle in a great choral number—complete with some extra-fancy stepping! Moreover, a second act pas-de-deux during the reflective “Sarah Brown Eyes”—masterfully performed by dancers Remmie Bougeois and Jenna Gillespie–really showcases how effective movement can be in conveying deep emotions, and is still another first-rate sample of Solimando’s artistry at its most top-notch!

“The Wheels Of A Dream Are Turning For Us Girl, And The Times Are Starting To Roll” Rufus Bonds Jr. Is Coalhouse Walker And Daebreon Poiema Is Sarah

Boasting an entire ensemble of triple-threat players, leading them all is Rufus Bonds Jr. who’s nothing short of remarkable as “Coalhouse Walker Jr.”—the touchstone through which most of the on-stage exploits occur. Gifted with a deep, bluesy and expressive voice, he particularly excels with “Coalhouse’s Soliloquy” and the incendiary “Justice”; in addition, his all-out passionate delivery of “Make Them Hear You” transforms this eleven o’clock number into a bona fide anthem for our times. 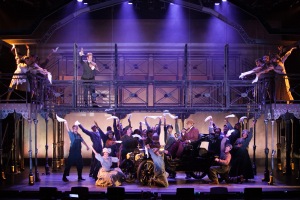 “Cars Keep Movin’ In One Direction–A Genuflection to ‘Henry Ford’!”

Paired with Daebreon Poiema as his lady-love “Sarah”, the two are easily the show’s most tuneful couple, practically giving off vocal sparks with the vibrant “Wheels Of A Dream” and later, the wistful “Sarah Brown Eyes”, while she herself prevails with Sarah’s lullaby, “Your Daddy’s Son” (in which she explains her actions to her baby) building gradually until it’s a full on exclamation of unrepressed optimism, that reveals what kind of vocal fire-power she too is capable of!

As “Mother”, Christanna Rowader demonstrates time and again that she really knows how to interpret an intricate lyric with great sensitivity and (where required) gusto—as she does with her opening salvo, “Journey On” (sung with “Father” as he leaves on an expedition,) as well as “What Kind Of Woman” (wherein she has just discovered the abandoned newborn,) and her equally potent act two personal ‘emancipation proclamation’ “Back To Before”. As her husband, Craig McEldowney deserves a few kudos of his own depicting a man of his era—not bad, just schooled in a different way of thinking than we might be today, with a different (and for the time, not wholly unreasonable,) set of expectation from life. He also has a superior singing talent that is well evidenced in “Journey On”, “New Music” and the boisterous “What A Game!”

“Strangers Sharing The Beginnings Of A Journey…” Craig McEldowney Is “Father”, Christanna Rowader Is “Mother” & Gary Patent Is “Tateh”

Furthermore, Gary Patent brilliantly makes his mark as the world-weary-but-determined “Tateh” whose slowly approaching ‘rag boat’ passes the ship “Father” is heading out on as it chugs toward Ellis Island. His sensitive, introspective handling of his part in the trio, “Journey On” is in the same degree stirring, as is his solo descant “Gliding”, which includes an ancillary hint of excitement as “Tateh” gets his first taste of capitalistic success after fleeing from the grime of New York’s Lower East Side. Jeanette Dawson is also terrific as the flirty, scandalous ‘Girl On The Swing’, Evelyn Nesbit. She particularly shines at the center of the infectiously bouncy “Crime Of The Century” (detailing how her ‘husband’, Harry Thaw, “the eccentric millionaire—and a very violent man,” shot and killed her former lover, ‘Madison Square Garden’ Architect, Stanford White.) Tyler Miclean likewise does a fine job as “Younger Brother”—initially presenting a frivolous fellow of leisure who develops a deeper, if somewhat misguided, social consciousness as a result of a chance encounter with famed anarchist Emma Goldman (played by Jean Kauffman.) Not to be overlooked are the younger members of this troupe who also make laudable contributions of their own. Donovan McFann offers our first glimpse into this world of privilege and privation as “Little Boy”—a lad who just may turn out to be none other than the 20th Century’s “Sleeping Prophet” Edgar Cayce (“Warn The Duke” he suddenly shouts upon meeting Gary Brintz as his idol, “Harry Houdini”, when the great illusionist is bound for an appearance in Sarajevo.) Brooke Besikof too, is a delight as “Tateh’s” daughter, “Little Girl”, while little Kingson Higgins is as cute as they get–providing the show some last-minute smiles as the toddler, “Coalhouse Walker III”. 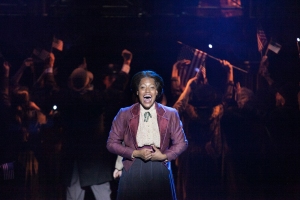 “One Look At You, Now Every Note Feels Right, Comin’ Out All Sweet And Slow.” Daebreon Poiema Is “Sarah”

Lush, romantic, heartbreaking, outrageous, and momentous all at once, your eyes will never leave the stage—nor want to! Having opened Saturday October 11th, “Ragtime” will play through Sunday, October 26th at “The Plummer Auditorium” located at 201 E. Chapman Avenue, in Fullerton, California. Show-times are Fridays and Saturdays at 8:00 PM, Sunday Matinees at 2:00 PM (with an added Saturday Matinee at 2:00 PM on October 25th) Afterward, it will move for an additional two weekends to “The Redondo Beach Performing Arts Center” located at 1935 E. Manhattan Blvd. in Redondo Beach, California. Performance Dates and Times for this engagement are: Saturday November 1st and 7th at 8:00 PM, Sunday, November 2nd and 9th at 2:00 PM, with an added Saturday Matinee on November 7th at 2:00 PM as well. Tickets for each engagement may be obtained by calling 714 589-2770, Ext. 1, between the hours of 11:00 AM to 5:00 PM Monday through Friday; 12:00 PM through 4:00 PM on Saturdays, or by logging onto  www.3dtshows.com. (Special Group and Student discounts are available for both locations.)

“…And There Was Distant Music, Simple And Somehow Sublime; Giving The Nation A New Syncopation: The People Called It ‘Ragtime’!”