“Let The Good Times Roll”: The Chromolume Theatre’s Sondheim Revue “Putting It Together” Expertly Shows How You Make A Work Of Art! 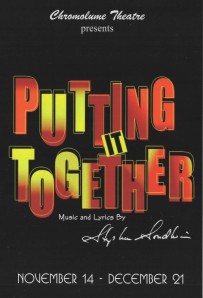 “Bit by bit, putting it together; piece by piece—only way to make a work of art. Every moment makes a contribution, every little detail plays a part. Having just the vision’s no solution—everything depends on execution: Putting It Together!”

“Us, old friend, what’s to discuss, old friend? Here’s to us–who’s like us? Damn few!” The Cast Of “Putting It Together”

Located in Los Angeles, California, “The Chromolume Theatre” At “The Attic” presents the final show of their incredible 2014 season with “Putting It Together”–a delightfully rambunctious musical revue built around the Tony Award, Pulitzer Prize–and even Oscar-winning songs of Composer-Lyricist, Stephen Sondheim. Based on a concept by Sondheim and Julia McKenzie, the result is a clever celebration of the Master-Composer’s most enigmatic works, taking its name from a tune featured in his 1984 hit, “Sunday In The Park With George”. With a score comprised of nearly thirty melodies culled from some of Broadway’s best-loved musicals–including, “Company”, “Follies” and “A Little Night Music”, as well as several numbers cut from their original productions, “Putting It Together” is very well suited for “The Chromolume’s” nicely intimate setting.

“Here’s to the girls who play wife–aren’t they too much?! Keeping house but clutching a copy of life, just to keep in touch…” Kristin Towers-Rowles is “The Leading Lady” (Woman 1)

Almost completely sung-through with only brief lines of dialog or descriptions of the prevailing emotions of those on stage, the show dispenses with a formal overture. Immediately, spectators find themselves at an upscale Beach-front home in Malibu belonging to a famous “Producer/Director” and his wife, “The Leading Lady” on the evening of a ritzy cocktail party celebrating his latest movie’s release. (“These are the Movers, these are the Shakers; these are the people who give you the vapors” we’re advised.) Although only referred to in the program as “Man 1”, “Woman 1”, “Man 2”, etc. it’s the characters they play that really move the action forward, providing the goings-on with a sense of progressive (and at times, even frantic) momentum. Right away, the party’s “Caterer/Bartender” greets us in a most congenial (–not to mention hilarious) way with “The Invocation And Instructions To The Audience” taken from one of the Composer’s more esoteric efforts, “The Frogs” (“Please don’t fart-There’s very little air, and this is art!” he pleads,) before joining the rest of the cast in the rollicking title number, (complete with additional seldom heard lyrics,) as one by one they each take the stage, ‘introducing’ themselves. Along with the Caterer (–who’s also a budding screenwriter himself,) the couple are soon joined by an up-and-coming “Composer/Actor” and his date—an aspiring “Starlet”, who all spend the evening reflecting on the desires and difficulties of relationships amidst life “in the biz” of Hollywood.

“The run in the stocking-the snag in the zipper; the carbon monoxide that fills the garage!” Kristin Towers-Rowles As “The Leading Lady” & Rachel Hirshee As “The Starlet” Warn Us “There’s Always A Woman”!

The basic theme here is one that’s been often explored in Sondheim’s most notable projects—marriage (or more pointedly, marriages in trouble,) and whether love in the end, really does conquer all. Then again, “Putting It Together” is a superb primer featuring the Song-smith’s most iconic show-tunes (and then some) as well as a number of his lesser known ones, providing both seasoned “Sondheim” aficionados and complete novices to his art alike, with a thrillingly witty and entertaining time. In fact, the songs selected show proof-positive just how ‘act-able’ and full of genuine substance this legendary Melodist’s creations truly are. Moreover, for those familiar enough with the songs, the shows they made their debut in, and in which context they were presented, it’s actually kind of fascinating to see how they’ve been reimagined and re-situated—like “Everybody Ought To Have A Maid” from “A Funny Thing Happened On The Way To The Forum”, presented here with a surprising and comical change of gender, or the swaggeringly ‘wolfish’ “Hello Little Girl” (from “Into The Woods”.) Likewise, it also provides a keen opportunity for some of his slightly obscurer songs (such as “Live Alone And Like It” and “Back In Business” from the film, “Dick Tracy”, for example) to finally get their overdue recognition.

“Life is swinging, bells are ringing, everyday I wake up singing!” Kurt Andrew Hansen is “The Producer” (Man 1) Rachel Hirshee is “The Starlet” (Woman 2) Chris Kerrigan is “The Composer/Actor” (Man 2)

Each of the five-member cast possesses a fantastic voice paired with the outstanding ability to interpret the frequently intricate sentiments that match such sophisticated note-phrases and chord-structures. All have their moments to shine here—and most assuredly, shine they do! As the “Hollywood Producer-Director” (Man 1) Kurt Andrew Hansen does an admirable job personifying the proto-typical Sondheim “anti-hero”: the dashing guy who seemingly has it all and at times can be a bastard, but who still has a fundamental compassion, empathy—and perhaps most significantly, maturity to him. Hansen commendably displays all these various sides through the songs he’s been given, particularly the rakish “Have I Got A Girl For You”, and the second act’s introspective “The Road You Didn’t Take”, then ultimately, “Merrily We Roll Along’s” wistful, “Good Thing Going” wherein we find, behind all the macho posturing and flashy façade, there really is a fragile human being who sincerely loves his wife (“We took for granted a lot, and still I say, it could have kept on going instead of just ‘kept on’; we had a good thing going…going…gone.”) In the role of his wife (Woman 1) Kristin Towers-Rowles makes her dynamic presence (and talent) known in widely varying–but always astounding–ways, whether she’s playing the wounded, rightfully indignant spouse with “My Husband The Pig” (initially cut from “A Little Night Music”) which then segues into “Everyday A Little Death” from the same show, or the more rancorous “Could I Leave You” from “Follies”; the side-splittingly over-the top ‘drunk’ of “The Ladies Who Lunch” (made famous in “Company”); the vibrant but barely-restrained cattiness of “There’s Always A Woman” (–a deleted track from “Anyone Can Whistle” that, thankfully, is given a fitting and very funny time in the spotlight here); then to the standing-ovation worthy vocal acrobatics of “Not Getting Married Today”. As a twosome, Rowles and Hansen’s opening duet, “Do I Hear A Waltz” (from Sondheim and Richard Rodger’s 1965 show of the same name) is A-Plus, (and is the only piece used that features music not by Sondheim himself;) as is their shared ode to domestic ‘complexity’, “Country House” (omitted during out-of-town try-outs of “Follies”.)

“Would you like to see a friendly Shrink?”; “I think I’d rather have another drink.” Kristin Towers-Rowles as “The Leading Lady” (Woman 1) & Kurt Andrew Hansen as her husband, (Man 1)

By the same token, Rachel Hirshee as the “Would-Be Starlet” (Woman 2) makes a fine ingénue—gifted with sharp comic timing as well as a spot-on ability to express sensitivity where need be that underlies all that coquettish sex appeal. She absolutely knocks your socks off with the first act’s “Lovely”, as well as with the seductive “Sooner Or Later”, and her part in the touching duet “Unworthy Of Your Love” (remarkably repurposed from “Assassins”.) In addition, her interpretation of “More” (also formerly from “Dick Tracy”) is exuberantly delivered and, judging from Opening Night’s enthusiastic crowd, well received (–it features some pretty nifty dance steps to boot!) Chris Kerrigan is yet another charismatic vocal powerhouse as the “Composer-Actor” (Man 2). He too, more than earns his share of applause over the course of the evening, but especially via those numbers that hold a little more visceral depth to them, such as “Sweeney Todd’s” “Pretty Women”, and his part in “Unworthy Of Your Love”. Indeed, Kerrigan’s “Marry Me A Little” (cut from—and then restored to–“Company”,) is a bona-fide highlight of this production. Tying everything together is Mike Irizarry as the party’s “Caterer/Bartender” (also known as Man 3). Not so much a full-on narrator” as he is a “Scene-setter” (or even more accurately, a “Mood-setter”,) who’s occasionally an active participant in the action, Irizarry is an amiable host making the most of his time on stage with great numbers that include some equally wry commentary like “Merrily We Roll Along” (parts 1 & 2), “Bang!”, and the ‘Jolson-esque’ “Buddy’s Blues” (first conceived as a trio—here hysterically staged with Mike performing all three parts!) While there are more duets in the first act and more solo-turns in the second, it’s when the company comes together as a whole that some really magnificent theatrical moments occur. “Back In Business” is a bouncy Act Two opener (“Back again like a boomerang–same old stand, and same old gang. Back in business with a BANG! Let the ‘Good Times’ roll!”), and the jovial “Hey Old Friend” makes for a terrific, up-beat conclusion; but the most dazzling group triumph which boasts some incredible harmony is definitely their collective rendition of Sondheim’s unforgettable “Being Alive” from “Company”! 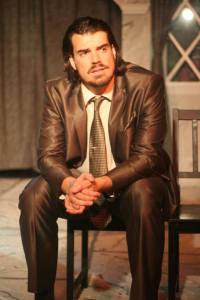 “Marry me a little, Body-Heart-and-Soul; Passionate as Hell, but always in control…” Chris Kerrigan is “The Composer/Actor” (Man 2)

As with the cast she’s chosen, Cate Caplin’s direction and choreography themselves are forces to be reckoned with, and she impressively balances many elements with awesome dexterity. Too often, the temptation with smaller musicals is to omit any choreography whatsoever (or at least minimize it.) Happily, such is anything but the case here, as Caplin incorporates lots of snazzy stepping and polished moves here and there into the most unexpected places; in doing so, she not only maximizes the effectiveness of the Chromolume’s stage-space, she also heightens the show’s over-all ‘razzle-dazzle’ factor demonstrating just how “larger than life” a so-called ‘chamber’ musical like this can really be. Special distinction also has to go out to Musical Director Richard Berent, who does a superlative job throughout the show as the production’s on-stage accompanist as well.

“Dreams to explore, waking up the country-side, everybody merrily, merrily, sing ’em your song!” Mike Irizarry is “The Caterer/Bartender” (Man 3)

A “Must-See” for students of music, theater, and anyone eager to experience some remarkable performances or a smartly done bit of musical theater, “Putting It Together” opened on Friday, November 14th, where it will run through Sunday December 21st, 2014. Show-times are Fridays & Saturdays at 8:00 PM with Sunday Matinees at 2:00 PM. “The Chromolume Theatre” At “The Attic” is located at: 5429 W. Washington Boulevard (between the 10 freeway and Hauser Boulevard), in Los Angeles, California. Tickets may be purchased by phone at: (323) 205-1617 or on-line by visiting: www.crtheatre.com .