Dear Friend: There’s Plenty To Love About “The Chance Theater’s” Restaging Of “She Loves Me” In Anaheim, CA!

“Will wonders never cease?!” Just in time for the holidays, “The Chance Theater” at “The Bette Aitken Theater Arts Center” in Anaheim California, is presenting “She Loves Me”! Charming, romantic—the perfect show to celebrate the season with, it features music by Jerry Bock and lyrics by Sheldon Harnick–the same team who created the unforgettable “Fiddler On The Roof”, with a book by Joe Masteroff (himself known for his work on “Cabaret”.) Often called a “jewel from Broadway’s Golden Age”, “The Chance’s” inspired revival provides audiences with a sweet little yuletide tale that makes a delightful Valentine to this festive time of year!

“Will he like me? Who can say? Oh, this evening seems a million years away!” (Erika C. Miller Is “Amalia”)

A very human story with refreshingly realistic performances, the action is set almost exclusively in and around “Maraczek’s”–a small, perfume store in Budapest, Hungary circa 1937. There, clerks “Georg Nowack” and “Amalia Balash” escape the workaday grind (not to mention mutual hostilities with one another) through passionate letters to anonymous pen pals–never guessing that they are actually, unknowingly, writing to each other! Almost immediately we discover that our hero, “Georg” is preoccupied with a serious correspondence he has with a mysterious young lady he addresses only as “Dear Friend”. On one particularly hectic day, “Amalia” enters looking for a job—determined not to take no for an answer, and suffice it to say theirs is ‘dislike at first sight’. However, as the days eventually progress (–and after more than their share of continued misunderstandings) Amalia finds that “right before her eyes, the man that she despised has turned into a man she likes”, until naturally, it all ends wonderfully (–as all the very best holiday exploits do!) 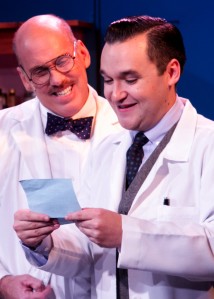 Adapted from the original play “Parfumerie” by Playwright Miklos Laszlo, “She Loves Me” stays pretty close to its source material that gave rise to such classic films as “The Shop Around The Corner”, “In The Good Old Summertime”, and more recently, “You’ve Got Mail”. Sarah Figoten Wilson’s insightful direction plays to the many strengths contained in Masteroff’s swift-moving libretto while emphasizing the honesty and veracity of the situations depicted–and, most especially, those depicting them. The engaging result is genuine, believable ‘people’ as opposed to your standard “Musical Theater Characterizations” so common in previous versions of the show. Then too, where it does appear, Christopher M. Albrecht’s nimble choreography is sharp and energetic—injecting a bit of animation and liveliness into the story while incorporating some sprightly Hungarian folk dance-moves to boot! (Indeed, sharp-eyed viewers may also notice how Albrecht has deftly thrown in a few ‘knowing nods’ to the Author and Song-writing team’s other, previously mentioned classics in several numbers.) There’s even a “Gypsy Violinist/Flower-girl” who pops in and out of the action, serving as a kind of tuneful ‘spirit’ of the city. 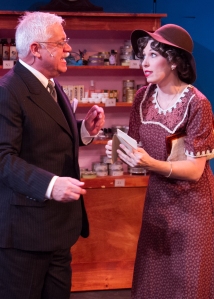 “I’m a very good sales girl–really good! And I know the Parfumerie business inside and out!” (Erika C. Miller As “Amaila” Entreats Beach Vickers As “Mr. Maraczek”)

“All night, circling the floor, ’til dawn lit up the sky…no one younger than I, in days gone by!” (Beach Vickers Is “Mr. Maraczek” With Stanton Kane Morales As “Georg”)

Being a smaller cast musical, everyone pretty much gets their moments in the spot-light. Leading them is “Chance Theater” founding artist Erika C. Miller, as “Amalia” and Stanton Kane Morales as “Georg”. Possessed with a gorgeous soprano voice with just the right touch of tremolo, Ms. Miller’s “Amalia” isn’t so much disagreeable or temperamental as she is determined, which causes her to be somewhat quirky at times. Her ‘aria” (for that’s exactly what it is–) “I Don’t Know His Name” is nothing short of sensational, effectively showing-off her amazing talent. When it becomes a duet with her fellow shop-girl “Ilona”, they each elevate this to a bona-fide Act One highlight! Then again, Miller’s is a role with numerous shades to it and she does a top-notch job showing them all. The Act One closer, “Dear Friend” offers a flawless opportunity to divulge Amalia’s more ‘ hidden’ introspective nature and sensitivity, while the second act’s “Vanilla Ice Cream” (—one of the score’s more famous inclusions) is a fantastic occasion to introduce an element of comedy into the proceedings as well. This immediately segues into Georg’s solo-turn with the title number, and here he really dazzles (think of the two numbers as a sort of  thrilling ‘one-two’ punch in the second act!) Morales too, has a sumptuous tenor voice capable of significant power and expressiveness, and his first act ‘soliloquy’ “Tonight At Eight” is full of intense vocal gymnastics, but includes several good moments of subtlety too. Together, Morales and Miller make an overall winning combination (besides being a most melodious couple–whether their characters see it at the outset or not!)

“How I envy you, each evening when work is through–for I only have me to be with, while you have you!” (Taylor Stephenson Is “Kodaly” & Camryn Zelinger Is “Ilona”)

A popular figure at “The Chance”, Camryn Zelinger once again proves her magnificent chameleon-like qualities as the lovelorn “Ilona”—so utterly and enchantingly ‘becoming’ the character that she’s nearly unrecognizable from her previous projects. “Ilona”, it turns out, has been having a not-so-clandestine ‘involvement’ with her co-worker, ladies-man “Steven Kodaly”. Taylor Stephenson’s “Kodaly” is more about laid-back charm than out-and-out ‘sleaze” here–if anything, he’s your typical “driven’ guy looking out for himself first, rather than about any (outward) malice. Stephenson’s handling of “Come With Me, Ilona” is deliciously seductive revealing his striking voice that really could make a girl melt! In fact, this one too, is definite ‘standout’ number in an evening full of them! (Of course, as is often the case, before the final curtain is rung we’ll learn that Kodaly is an even bigger rat than his laconic, easy-going facade would have us believe–one who “works hard—at all the wrong things!”) As the spat-wearing, puckish “Mr. Maraczek”, Beach Vickers is also thoroughly likable (but still capable of ample boisterousness and swagger.) His energetic “Days Gone By” is an avuncular bright-spot early on, then a little poignant in its later reprise; meanwhile, Daniel Jared Hersh is likewise a ‘force’ as young go-getter “Arpad Lazlo”—initially the shop’s delivery boy who is ultimately promoted to shop assistant. He single-handedly re-charges the goings-on with his amusing Act Two opener, “Try Me”. Moreover, Corky Loupe’s take on the long-suffering clerk, “Ladislav Sipos” isn’t so much sycophantic or mousey (as it would be so easy to portray him as.) Instead, he’s more practical than pathetic. 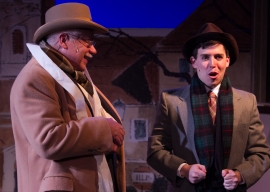 “I have trained myself- going shelf by shelf- and I know each item in the store.” (Daniel Jared Hersh Is “Arpad” with Beach Vickers As “Mr. Maraczek”)

In addition, excellent supporting contributions are made by Matt Takahashi, who poses equal parts pretension, bluster, and hilarity as “The Café Imperiale’s” slightly jittery-but-still-overbearing “Maître d’ ”. His gifted ‘management’ of “A Romantic Atmosphere”—the one really big production number and also the funniest–makes this into a major hit; while Elizabeth Adabale also does an A-Plus job as a Billie-Holiday-esque “Blues Singer” in the same Café whose song-stylings and snippets of authentic “30’s era” standards help the transition from the shop to the restaurant (–one of the longer sequences, and one of the very few scenes to take places out of “Maraczek’s”) to come off as clever and seamless. Not to be overlooked either is Tina Nguyen’s “Gypsy Violist”; one of only two musicians the piece utilizes (the other being the dynamic work of pianist Ryan O’Connell who appears on stage throughout) she may not speak, but still makes her vibrant presence known in the very best possible ways nonetheless! As an ensemble, the entire bunch achieve some stunning collective work, such as in the opening, “Good Morning, Good Day”–a jaunty introduction to all the key players (and those they serve.) They also demonstrate terrific harmony during “Sounds While Selling” (which humorously exhibits the day-to-day undertakings of the shop.) Toward the end, the “Twelve Days To Christmas” is yet another energetic group effort that helps send the show out on a very positive, (if a touch, frenetic) note.

“Think of all the Love Affairs we assist–what more noble calling is there than ours?!” (Matt Takahashi Is The “Maitre’D” Of “The Café Imperiale”)

The simple orchestrations for “She Loves Me” both delicately–and brilliantly–recall the best of the old Hungarian school of musical composition (think Franz Liszt or Bela Bartok) with lots of dramatic embellishment and violin underscoring (–thanks again to the impressive work by Ms. Nguyen!) What’s more, Scenic Designer Bruce Goodrich demonstrates his own brand of ingenuity with a keen “fold away’ set that literally opens and closes as the store’s ‘hours’ dictate—and he’s done just as noteworthy a job as the show’s Costumer as well, furnishing smart, urbane, period garb that’s also right on the money. So why not present yourself with this big, bright, “musical candy-box” of a show? Having opened Friday December 5th, “She Loves Me” will play through Sunday, December 28th, 2014. Show-times are Friday and Saturday evenings at 8:00 PM, Saturday Matinees at 3:00 PM and Sunday Matinees at 2:00 PM ; “The Chance Theater” at “The Bette Aitken Theater Arts Center” is located at 5522 E. La Palma Ave., Anaheim, CA., and tickets for all performances can be obtained by calling (714) 777-3033 or logging onto: www.ChanceTheater.com .

“She loves me! (True, she doesn’t show it.) How could she, when she doesn’t know it?!” ( Erika C. Miller Is “Amalia” With Stanton Kane Morales As “Georg”)