Glad Company: A Most Delightful “Mary Poppins” Soars Up To The Highest Heights In La Mirada, CA.

“Mary Poppins” at “The La Mirada Theatre For The Performing Arts” (www.LaMiradaTheatre.com)

It’s a ‘Jolly Holiday” in La Mirada California, where “The La Mirada Theatre For The Performing Arts’ in association with Mc Coy-Rigby Entertainment are offering the final production of their acclaimed 2014-2015 season–the ebullient “Mary Poppins”! Based on an inspired blending of the time-honored stories by P.L. Travers and the iconic film by Walt Disney Productions, this often mesmerizing theatrical achievement certainly puts the “Super” in “Supercalifragilisticexpialidocious”! Adapted for the stage by Julian Fellowes, it features the unforgettable songs by brothers Richard M. Sherman and Robert B. Sherman, with several new ones (and additional music) by George Stiles and Anthony Drewe. With these more recent pieces flowing seamlessly from the older ones, rest assured that this “Mary” features most all of the best-loved refrains from the movie’s Academy Award-winning score, including: “Step In Time”, “A Spoonful Of Sugar”, “Let’s Go Fly A Kite”, and the sumptuous “Feed The Birds” (–said to be Walt Disney’s personal favourite among all the songs from his various cinematic outings) in addition to several remarkable new numbers which provide the story with plenty of unexpected melodic marvels!

“Oh, it’s a jolly holiday with Mary–Mary makes your Heart so light!
When the day is gray and ordinary, Mary makes the sun shine bright!” (Brandi Burkhardt as “Mary Poppins” is serenaded by Leigh Brian Wakeford as “Bert”)

Fellowes book highlights the comedy inherent to the story—particularly early on during the opening number, “Cherry Tree Lane” into which has been cleverly incorporated several familiar tunes from the motion picture, integrating them into a larger musical sequence. (This happens frequently throughout with the songs and situations referencing those in the film, but never exactly duplicating them.) There we are introduced (or more fittingly, re-introduced) to the “Banks” family of “#17 Cherry Tree Lane”, London in the year 1910. Social-climbers who put “appearances” before feelings, there’s husband George, his wife Winifred, and their unruly children, Jane and Michael. If ever a clan was in need of some intervention (at least for the Edwardian era) it’s this one! That “help” arrives in the person of the titular “uncanny nanny”, whom they soon discover is “Practically Perfect, in every way”: “I’m practically perfect, and here’s my aim” she tells the children, “by the time I leave here you both will be the same!” (“Better keep an eye on this one” Michael cautions upon her sudden arrival; “She’s tricky!”)

With so much happening at any given moment, Glenn Casale’s crisp direction permits the story to move at near break-neck speed, while still keeping the viewer’s attentions sharply focused. This allows maximum appreciation of all the adventures unfolding on-stage while never permitting the truly spectacular “special effects” employed to ever overtake the significant humanity occurring at the same time. Likewise, the original choreography by the late Dan Mojica has been lovingly recreated by Dana Solimando and serves as a magnificent living epitaph for this deeply respected artist. Again, don’t expect a carbon-copy of the movie; however, this unique re-envisioning of the Disney blockbuster is just as (and in many ways, even more) fulfilling! Indeed, many moments once regarded as sacrosanct within the traditional “Disney” canon have been given a whole new lease on life. For instance, the audience favourite “Jolly Holiday”—the first “big” crowd pleasing number, has a totally fresh, invigorating “look” (no button-clad buskers or dancing penguins here–as, word has it, was Ms. Travers strict directive.) Instead it’s a colorful odyssey through the park—complete with a balletic statute, as Mary advises the children that plain or fancy, magical or mundane, depends entirely on how one chooses to look at something. Similarly, “A Spoonful Of Sugar” has been repurposed into a new scene directly drawn from Traver’s “Mary Poppins In The Kitchen” where it works exceptionally well! Subsequently, in the second act, “Step In Time” ranks as one of the most astounding dance interludes anyone is bound to see this season (–or any other for that matter–) having been transformed, accompanied by added verses, into a lively tap-number that holds more than a few stupefying moments. Shortly after, “Anything Can Happen If You Let It”—another new addition to the score—could itself arguably be considered one of the very best “Eleven O’Clock” numbers of any musical within the last decade or so. 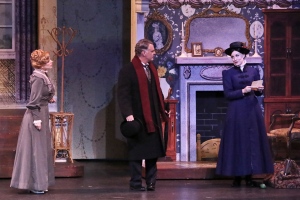 “Each virtue virtually knows no bound; each trait is great and patently sound!” (Brandi Burkhardt as “Mary Poppins” advises Shannon Warne as “Mrs. Banks” & Martin Kildare as “Mr. Banks” that she’s “Practically Perfect In Every Way”.)

The key relationship in this version is that of the Banks children and cheerfully, young Noa Solorio and Logan J. Watts as “Jane” and “Michael”, are more than up to the challenge. Additionally, they both demonstrate laudable sincerity–not trying to “play” some adults’ ‘idea’ of what children are supposed to be as so often is the case. This affords a refreshing air of believability throughout, and they especially score big with their contributions to “A Spoonful Of Sugar”, “Let’s Go Fly A Kite” and “Anything Can Happen”. As their father, “George Banks”, Martin Kildare is anything but the befuddled victim of his circumstances many are doubtless accustomed to. Here, his troubles at the bank stem not from the children disrupting things but rather because, in reminding him of his honor and ideals, he is (temporarily) suspended for doing something fairly noble. Shannon Warne is also utterly charming as his wife, Winifred, who ultimately proves that behind every great man, there’s an even greater woman like her looking out for him! In fact, her introspective “Being Mrs. Banks” is such a strong addition to the score that one gets the notion that had it been a part of the original screen classic, it would have walked away with the “Best Song” Oscar for that year!

Another advantage to this re-telling is the ‘endearingly eccentric’ figures who populate and enliven it. As Mary’s “Jack-of All-Trades” pal “Bert”, Leigh Brian Wakeford is our dashing and genial guide through all of the goings-on, and along the way, he even delivers some sheer amazement of his own! Wakeford shines leading “Let’s Go Fly A Kite” in the first act, then with the softer reprise of “Chim, Chim Cher-ee” that concludes it, which has been reworked into a touching roof-top duet between he and Mary; after intermission, he absolutely astonishes with his part in “Step In Time” wherein he literally walks up and around the entire proscenium arch (–and yes! It is as thoroughly eye-popping as one would expect!) Dino Nicandros too, as the Banks’ much put-upon servant, “Robertson-Ay” is terrific with a bona-fide flair for slap-stick–and what a powerful voice he has! Furthermore, Joël Renȇ as “Mrs. Corry” the “Word Seller” (with the biggest one naturally being “Supercalifragilisticexpialidocious”) is unabashedly brilliant! She handily oversees the vibrant celebratory (and show-stopping) number honoring the story’s most famous adjective to impressive result–plus, if you look real close at some of the hand-gestures the cast are making while ‘spelling out” the word, you may just notice they appear to be using American Sign Language (–still more evidence of Mojica’s inventiveness.)

“When Dukes and Maharajahs pass the time of day with me, I say me special word
and then they ask me out to tea!” (Joël Renȇ as “Mrs. Corry” leads the cast of “The La Mirada Theatre’s” “Mary Poppins” in praise of “Supercalifragilisticexpialidocious”!)

Also worthy of note is Helen Geller as the kind-hearted “Bird Woman” who sits on the steps of “St, Paul’s Cathedral”. She manages to send joyful shivers down your spine with her part in “Feed The Birds”. Then there’s the ominous “Miss Andrew”—the villainess of the tale. Dazzlingly played by Mary Gutzi, Miss Andrew is the woman who raised Mr. Banks (and hence, is responsible for the uptight way he is.) Referred to as “The Holy Terror”, she’s a delicious cross between the Wicked Witch of the West (with a proper British accent of course,) and Snow White’s Evil Queen—and, given Ms. Guzi’s boisterous, fun, and prodigiously “operatic” take, she’s that severe cautionary figure every frustrated parent threatens their misbehaving moppets with (“Brimstone and Treacle and carbolic soap, these are the tools of my trade,” she sermonizes; “With spoonfuls of sugar you don’t have a hope of seeing that changes are made!”)

As for “Mary” herself, what (enough) can be said about this ‘picture perfect performance’–save that Brandi Burkhardt is like a lavish gift for any musical-theater lover! Presenting us with a pleasantly disarming “Mary”, she’s proper enough but not at all stand-offish, and her voice is not one note less than pristine; happily also, she gets plenty of great opportunities to show it off with such stylish numbers as these! It’s never easy stepping into roles that are so ingrained in the public’s consciousness as are the big screen interpretations (by Julie Andrews in her Oscar-winning role and Dick Van Dyke, respectively) but both Burkhardt and Wakeford go a long way in making these their very own and it pays off “in the most delightful ways!” Not to be overlooked either are the production’s more technical but nonetheless significant “co-stars”, including Janet Swenson’s incredibly bold, prismatic costumes, Jonathan Infante’s extraordinary digital light projections and Paul Rubin’s breath-taking “flight” sequences—all of which contribute so much to the play’s overall “enchantment” quotient. Then again, this whole enterprise is about surprises, and there’s plenty to be had here! 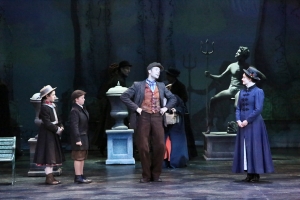 “All that it takes is a spark then something, plain as a park becomes a wonderland
All you have to do is look a-new, then you’ll understand” (Leigh Brian Wakeford as “Bert” welcomes Brandi Burkhardt as “Mary Poppins”, Noa Solorio as “Jane” and Logan J. Watts as “Michael” to a “Jolly Holiday”)

Anyone missing their sense of wonder lately can come claim it again at “The La Mirada Theatre For The Performing Arts” where it’s waiting with this wonderful, wonder-filled  rainbow-flavored bon-bon of a show! After opening on Saturday, May 30th, “Mary Poppins” will run through Sunday, June 21. Show-times are 7:30 pm on Wednesdays & Thursdays; 8:00 pm on Fridays; 2:00 pm and 8pm on Saturdays; with matinees at 2;00 pm on Sundays. (There will be additional performances on Tuesday, June 16 at 7:30pm and Sunday Evenings June 14 & 21 at 7:00 pm, with special “Talkbacks” with the cast and creative team after the final curtain, on Wednesday, June 3 and Wednesday, June 17.) “The La Mirada Theatre For The Performing Arts” is located at 14900 La Mirada Blvd. in La Mirada California. Tickets may be obtained by calling the La Mirada Theatre Box-office at (562) 944-9801 or (714) 994-6310 or by logging onto: www.lamiradatheatre.com (Student, Senior and Group Discounts are also available.)

“Broaden your horizons–open different doors: You may find a ‘you’ there that you never knew was yours!” (Brandi Burkhardt is “Mary Poppins” & Leigh Brian Wakeford is “Bert” with Logan J. Watts as “Michael” and Noa Solorio as “Jane”)