‘Lose Your Blues’: The Laguna Playhouse “Cuts Loose” With The Musical, “Footloose”

“Please Louise! Jack Get Back! Whoa, Milo!” Let’s hear it for the historic “Laguna Playhouse” in Laguna Beach California, where they’ve kicked off their 2015-2016 season with the totally awesome summer offering “Footloose”! The hit stage adaptation based on the classic 1984 cinematic blockbuster of the same name, the book is by Dean Pitchford and Walter Bobbie based on Pitchford’s original screenplay, with music by Tom Snow and lyrics by Dean Pitchford. (Additional music is provided by Eric Carmen, Sammy Hagar, Kenny Loggins & Jim Steinman.)

“We’re shakin’ the past, makin’ our breaks—takin’ control if that’s what it takes” (The kids of “Bomont” are finally turnin’ it loose and getting “Footloose”!)

Featuring a rollicking Top 40 score, expertly augmented by others that have been written specifically for this stage retelling, familiar songs include “Holding Out for a Hero”, “Let’s Hear it For the Boy”, “Almost Paradise,” and the iconic title number, “Footloose”. Those original numbers, which initially provided background music on the big screen, here have been cleverly incorporated into the story to be sung and enacted by the enthusiastic 18 member ensemble. The result is a fast-paced buoyantly entertaining musical that’s sure to delight the entire family (–don’t be surprised however, if you leave the theater feeling younger and more revitalized than when you got there!)

In a jivey twist on the age-old story of teenage rebellion vs. establishment repression, streetwise city-boy “Ren McCormack” and his mother leave Chicago to move to the small Midwestern town of “Bomont” (“They don’t even have a zip code” he’s told.)  There he’s shocked to learn his new home has made rock music and any kind of dancing illegal! The action commences immediately, dispensing with a formal overture in favor of the exhilarating title number, as our boy says farewell to all his friends in Chicago and prepares to leave (“Mom, we’ve got a ten-hour drive ahead” he tells his equally reticent mother of their wistfully anticipated road trip “–we’ve got a lot of time to disagree.”)  This segues into the more staid and reverent “On Any Sunday” as we meet Reverend “Shaw Moore”–the Bible-thumping minister responsible for keeping the town dance-free, along with his flock, wherein is overheard “You know how a stranger is–if he’s not dumb, he’s dangerous” they immediately pronounce of the young newcomer. After church, Ren also encounters “Ariel Moore”, the pastor’s lovely but (slightly) wild daughter and the two join forces. With their senior prom just around the corner, Ren, Ariel, and their classmates want to do away with this outdated ordinance, and with her support, he finds the courage to initiate a battle to abolish the ban and in the process, enlivens the soul of the oppressed town’s young people! “We’re gonna throw a kick-ass party that’s gonna knock Bomont right off its tractor!” he proclaims.

Director and Choreographer Paula Hammons Sloan has created a first-class production that displays many of these old favorites in a completely re-invigorated, vivacious new light—even going so far as actually improving them in many ways. Indeed, this is one musical that builds on and genuinely surpasses its source material. Given the august reputation (and even the title) of this, it practically goes without saying that the dancing especially needs to be extraordinary, and most assuredly, in this regard “The Laguna Playhouse’s” latest presentation never disappoints! Moreover, at intermission, spectators were invited up on stage to join members of the cast in a free line-dancing lesson, which is completely fitting as Act Two commences at a honky-tonk when our young heroes take a road trip, essentially to learn how to dance in preparation for the big bash they’re hoping to pull off (“Think of it as research” Ren tells them.) Subsequently, encompassing a mixture of classic country-western, free-flowing new-wave and vintage 1960’s “go-go” meets 1940’s “jitter-bug”, the big dance at the end makes for a genuinely fun finale that’s so large and spirited it literally explodes off the stage and into the audience!

“Back where I come from, life’s never hum-drum, I wish I could take you there.” (Logan Farine as “Ren McCormack” “Can’t Stand Still”)

The leads are both extremely likable which is vital to the production’s success and identifiably, and happily too, they live up to the tasks laid out for them—and then some! Logan Farine stars as “Ren”—“A Chicago transplant with all the charm and sophistication that comes from living in a bustling metropolis” whose coming to town instigates all the events that follow (“If there’s anything worth fighting for, it’s freedom” he declares.) Logan capably launches the show with the opening “Footloose”, before going on to dazzle with some amazing acrobatic moves in “I Can’t Stand Still”; immediately after he is unceremoniously informed of the town’s ban on dancing and popular music for the last five years. Then his solo, “I’m Free (Heaven Helps The Man)” builds into a brilliant Act One finale. If Ren is the character that drives the story though, Lily Davis as “Ariel”, the preacher’s kid with the big attitude, affords it with an emotional center. At heart, she’s “Just a church goin’ gal with some Bad-Ass Red Cowboy Boots” who’s “holdin’ out for a hero’, and she’s found it in this recently arrived McCormack lad. Miss Davis’ dramatic presence is as high-caliber as her vocal ability and she’s absolutely riveting with each of her numbers. Making her mark right from the start with “The Girl Gets Around”, we learn what a free-spirit she really is (“God’s gonna strike you with a bolt of lightning” Ariel is warned; “No, SHE’S not!” the girl retorts.) After intermission, her romantic duet with Farine, “Almost Paradise” marks yet another case of a song winning far better on-stage than on film, making for a real highlight (In fact, one could almost feel many among the more seasoned members of opening night’s audience pleasantly melting back into youthful reveries hearing these two harmonize such beautiful lyrics!)

“I faced the nights alone—oh, how could I have known that all my life I only needed you…” (Logan Farine as “Ren” and Lily Davis as “Ariel” with Carol Robinson as “Vi Moore” and Ricky Pope as “The Reverend Shaw Moore”)

As the key “adults” in the cast, Ricky Pope excels in bringing humanity and a basic goodness to the tricky role of the “Reverend Shaw Moore” the man who has the town in a moral strangle-hold and the one responsible for the ban. His “Heaven Help Me” is well conveyed as he himself is finally brought to contemplate the righteousness of his convictions (“If Heaven can’t help, who can?” he questions dejectedly.) This vulnerability makes his ultimate redemption all the more fulfilling—even joyful–when it at last occurs. Meanwhile, Jill Slyter as Ren’s Mother, “Ethel” is a far stronger, more supportive presence here than has been depicted in previous versions—it is she who gives Ren a much-needed pep talk when he can use it most. Joining them is Carol Robinson as “The Reverend’s” wife and Ariel’s mother “Vi”. Her stirring second act benediction “Can You Find It In Your Heart” (another of the score’s first-rate additions written expressly for the stage) is tenderly conveyed as Vi, caught in the midst of the growing tensions between her daughter and husband, tries to bring peace back to her household. Earlier, Slyter and Robinson along with Davis comprise a melodic trio with the equally touching and pensive “Learning To Be Silent” as each ponder the cost of remaining passive in the face of moral intimidation, or as Ethel and Vi put it: “Learning there are some topics that we don’t even mention, and if they come up, then we try to be vague; there are subjects from which we divert all attention, and some we avoid like the plague!” 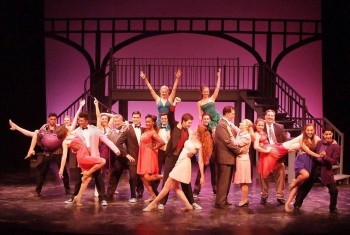 “We’ve got to turn you around and get your feet on the ground, now take a hold of your soul…” (The cast is cutting loose in The Laguna Playhouse’s “Footloose” ! )

Each maintains a vibrant vocal footing in each of the numbers they’re so much a part of, and together the three even form a sort of Greek Chorus–often commenting on the action through song, such as when they inform Ren that to enforce this “law”, constant surveillance is required, meaning anyone even thinking about going against the grain in Bomont must be wary that “Somebody’s Eyes Are Watching” (“Somebody’s eyes are following every move! Somebody’s waiting to show they don’t approve,” they warn.) Likewise, they join with Ariel for the dynamic “Holdin’ Out For A Hero”, effectively ‘raising the roof’ as Ariel (and all of them by extension) dreams of her perfect man. In addition, Miss Jean showcases her own impressive voice leading “Let’s Hear It For The Boy” (which also features a lively dance interlude) sung in praise of her clumsy crush, “Willard Hewett”. In that role of Ren’s none-too-bright farm-boy buddy, Michael Stancliff also delivers a great blast of comic support, handily making this character his own and banishing any memories of Christopher Penn’s hot-headed “bull in a china shop” turn from the film. At first resistant to the new kid’s personal magnetism, he soon becomes Ren’s chief ally in his quest to win over Ariel (“Ariel likes trouble,” he advises, “and you have definitely proved to everybody in this town that you are T-R-U-B-L!”) Demonstrating some pretty cool moves and a voice to be reckoned with, Stancliff particularly shines with his part in “I Can’t Stand Still”, and later with the hilarious “Mama Says You Can’t Back Down” (—complete with a well-deserved encore!)

Production Photos By Ed Krieger, Courtesy Of Demand PR (www.demandpr.com) Special Thanks To David Elzer At Demand PR, Paula Hammons Sloan, Ann E. Wareham, Karen Wood And To The Cast & Crew Of The Laguna Playhouse’s “Footloose, The Musical” For Making This Story Possible.

One thought on “‘Lose Your Blues’: The Laguna Playhouse “Cuts Loose” With The Musical, “Footloose””