New Kid On The Blockbuster: Grove Theater Center’s “Welcome To My World” Is One-Girl Wonderful In Burbank, CA.

“Kritzerland Entertainment” In Association With “One Girl Entertainment” Presents: “Welcome To My World” September 10-October 4, 2015 At “The Grove Theater Center” In Burbank, CA. http://www.wtmwthemusical.com

As kids, when most of us thought “Let’s put on a show” (–and honestly, who didn’t?) usually that’s all it was, with nothing much coming of it; then again, most of us weren’t 14-year-old dynamo—Sami Staitman!  Sami stars in her own “One-Girl Musical” (the first, we’re advised, to ever be written specifically for a lass this age) called “Welcome to My World”. Making its “World Premiere” at the “Grove Theater Center” in Burbank California, offering a series of monologues and songs, it introduces audiences to a bright, funny, irreverent and iconoclastic girl named “Molly” through whom we learn all about her endearingly unconventional views on numerous topics—including how she navigates the sometimes seemingly circuitous territory that is teen life today.

The creation of prolific (–and Grammy nominated) Producer/Director/Writer/Composer Bruce Kimmel (who also penned all the music and lyrics,) the script is peppered with loads of insightful sentiments—all nailed square on the comedic barrel-head! Readily regarded as the closest thing to a Bona-fide theatrical “impresario” in the world of “L.A. Theater” over the last few decades, Bruce has been long known and respected as the driving force responsible for some of the most unique entertainments during this time.

The Man And The Mind Behind “Molly”, Bruce Kimmel

Here, he has similarly lent his inimitable magic, concocting a rich, full-bodied-but-temperate theatrical cocktail suitable for all audiences. While it may be (only slightly) “PG-13” is some places, his genuinely clever book is equal parts wit and pith–bracing and always funny! Moreover, his score too, is overflowing with delightful songs—each with exquisite lyrics that are lush and poetic while at the same time staying smart (occasionally biting) and unforgettable! In addition, Kimmel also serves as the Director while his company “Kritzerland Entertainment” is also the producer, along with “One Girl Entertainment”.

Musical Direction is by Alby Potts who shares the stage with Staitman as the show’s accompanist, intermittently bouncing off a catchy one-liner or two and generally providing terrific support. Lighting Design (punctuated with several shrewdly humorous photographic “asides” projected onto the back wall) is by Adam Rayzor, with pastel-hued geometric-backdrop sets (best described as nouveau ‘funky’) courtesy of Rei Yamamoto; likewise, costumes are by Ken Patton, while the show’s one (albeit nicely stylish) tap number, “Dancing With Me” was choreographed by Cheryl Baxter-Ratliff, effectively recalling the ultra-sincere, and at turns even dapper and dramatic, “get out there and knock ‘em dead” excitement of many a fledgling dancer’s first public recital. 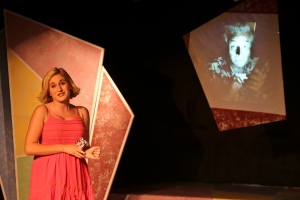 “Welcome to my world—enter if you dare…surprises in store and I’ll try not to bore so pull up a chair!” Sami Staitman is “Molly”

The opening ‘title’ number “Welcome To My World” is bubbly and buoyant—just the kind of tune that dances through your head for days—in all the best, most psyche-brightening, ways. “Welcome to my world…enter if you dare…it’s a world apart and it’s time to start,” “Molly” entreats shortly before proclaiming “I want to be an original—not a fax or a Xerox!” Noting also that “with so much out there, there’s no time to be nonchalant,” she may be an admitted ‘snack’ addicted danseur-in-training, (–her philosophy is to “dance away those pounds”–) but the girl’s got grit and plenty of chutzpah! Throughout the course of her time on stage she tackles such subjects as snacking, boys, death, friends (particularly false ones) High-school biology class, technology—even ‘common core’ math, along with a whole multitude of comparably  cogent subjects with an unexpected depth and discernment. (“I guess I’m what you’d call and ‘Old Soul’ ” she tells us.) 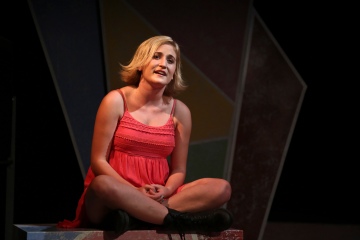 “I didn’t understand any of it—especially about not being able to see him again. He was always so sweet and funny and nice to me, and now he was going somewhere called ‘Heaven’?” “Molly” remembers “He Was Grandpa”

As “Molly”, young Ms. Staitman successfully carries off fourteen songs, fourteen monologues (one each for every year) and a suave little dance interlude; the result is a tour-de-force performance by an indisputably remarkable rising talent. This is a great role for any great up-and-coming performer, and with this, she proves without a doubt that she truly is a great up-and-coming performer! Gratis her sublime abilities as a vibrant and engaging ‘raconteur’, we discover Molly is a girl living more or less surrounded by more than a few “Kid-ults” (you know the type: fully grown people who still fancy themselves teenagers.) Chief among them is her mother: “She took away my cell phone for using the ‘A’ word” Molly complains—“You know, ‘Adult’!” Adding how she once reminded mom, who insisted on singing Rodgers and Hammerstein’s iconic “Sixteen Going On Seventeen”, that it would be more apt to say “You are sixteen going on FORTY EIGHT!” she later reveals how her mom asked to be called “Eileen” (after seeing the movie “My Sister Eileen’) when her name is actually “Dorothy”.

“When things don’t work out you wanna stand and scream and say ‘Enough’s Enough! Every day’s a dilemma–how can you make it through?!” Sami Staitman as “Molly” tries her hand at explaining “Common-Core Math”

Add to it, what a stupendous voice this gal has! Upon setting the stage for what’s to come with the dynamic opening, she scores with “I Want” wherein she literally hauls out a huge list of her plans, goals and desires—all appropriately large and lofty (as all young people’s dreams should be.) “T.M.I.” (Translation: “Too Much Information”) is a real tongue-twister which she handily finesses, and her artful rendition of “He Was Grandpa”, as “Molly” recollects her first understanding of death through the loss of her beloved grandfather, absolutely tugs at the heart. Subsequently, she again draws us in with the genial “Annie”, an ode to that famous red-headed musical orphan whom “Molly” dreamed of playing. This is a classic “story song”–well conveyed, as Sami enthusiastically allows us to share in the sheer bliss when her aspiring “Leading Lady-To-Be’s” dream was finally realized: “They say ‘the sun’ll come out tomorrow’” she exults, “but for me it came out that night!”

“I want: To only get offers and never audition…” Sami Staitman as “Molly” shares her long list of dreams in “I Want”

As for our heroine’s growing awareness of the opposite sex, she makes evident that’s already pretty much taken care of as well: “Boys are weird” she asserts, before going into the succinctly perceptive “Note To Boys” which could be a teenaged girl’s anthem for our time: “Act your age” she instructs any adolescent Romeos out there; “That means you’re just fourteen—fourteen year olds don’t need romance!” Staitman easily establishes her impressive vocal ability all though the show but reaches an especially inspiring zenith close to its center-point with “Let Me Sing”—as she expresses her hardly camouflaged desire to perform for the musical stage. There’s something very satisfying when a performer gets hold of just that ‘right’ song for them and delivers it with unrestrained jubilance and aplomb—this is Sami’s song! There’s even a nifty homage to Fred Astaire and Gene Kelly—complete with a snazzy tap-break as the actress demonstrates her dexterity with shim-shams, trenches, buffalo-steps—the whole fancy-steppin’ shootin’ match! (“We tap and we twirl—my head’s in a whirl” she imagines there, cavorting between two life-size cut-outs of the dancing legends, “I’m dancing on air—with Kelly and Astaire!”) In the end we’re reminded that “Molly” is a girl with an exceptional head on her shoulders; indeed, for all of her waxing about how off-beat or eccentric she is, it’s the plain, authentic, universality of the themes she touches on—the life of a teenager filled with all the hopes, fears, strengths and insecurities that everyone—regardless of their age, gender, or the various technologies they were surrounded by—have gone though and can relate to, that is this productions’ true treasure! 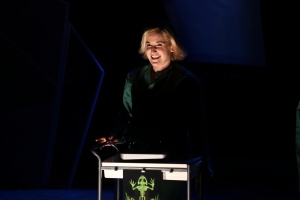 Come experience “The Molly Philosophy Of Life” with this thoroughly charming evening of theater! Definitely worth a trek to Burbank’s “The Grove Theater Center” to see, savor, checkout and cherish, just don’t be too surprised if it turns out to be one of your favorite theatrical memories! After Previewing on Thursday, September 10th and Friday, September 11th, “Welcome To My World” officially opened on Saturday, September 12th 2015 where it will run through Sunday, October 4th 2015.  Show-times are Fridays and Saturdays at 8:00 pm with Sunday matinees at 2:00 pm (with a special added closing performance at 7:00 pm on October 4th.) Ticket reservations can be made either via telephone by calling “Plays 411” at (323) 960-7787 or online by logging onto: www.plays411.com/world  ; The Grove Theatre Center” is located in the center of “George Izay Park”, at 1111-B West Olive Avenue in Burbank, California. For more information, checkout: http://www.wtmwthemusical.com . 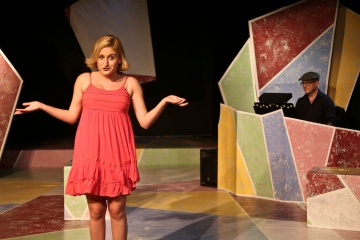 Production Stills By Michael Lamont (http://www.michaellamont.com) Courtesy Of Michael Sterling & Associates (www.msapr.net) and “Kritzerland Entertainment” In Association With “One Girl Entertainment”; Special Thanks To Michael Sterling, Bruce Kimmel, Sami Staitman, Alby Potts And The Staff Of “The Grove Theater Center” In Burbank California For Making This Story Possible.

One thought on “New Kid On The Blockbuster: Grove Theater Center’s “Welcome To My World” Is One-Girl Wonderful In Burbank, CA.”