Entertainment That Grows On You: One More Productions’ “Little Shop Of Horrors” Is An Out-Of-This-World Musical Comedy Banquet!

Hold your hat and hang on to your soul! Just in time to kick off the Halloween season, “One More Productions”, the resident company at the landmark “Gem Theatre” in Garden Grove California, is serving up a frighteningly funny feast with their latest production: “Little Shop Of Horrors”! Based on the 1960 camp classic film by chief schlock-meister, Roger Corman, the book is by Howard Ashman (who also furnished all the jumpin’ and jaunty lyrics) with plenty of vintage “rock and roll” influenced music by Alan Menken. Long before the scores for Disney’s “Little Mermaid” or “Beauty And The Beast”, “Little Shop Of Horrors” was-and remains–among the very best of the team’s work!

“Poor! All my life I’ve always been poor! I keep asking God what I’m for—and he tells me ‘Gee, I’m not sure!’” Scott Leslie is our hapless hero, “Seymour Krelborn”

“On the twenty-first day of the month of September, in an early year of a decade not too long before our own, the human race encountered a terrifying threat to its very existence” a booming narration advises us, “and this enemy surfaced–as such enemies often do–in the seemingly most innocent and unlikely of places!” Shortly thereafter, we’re introduced to meek skid-row floral assistant Seymour Krelborn who stumbles across a “strange and interesting” ‘new breed of fly-trap’ he’s named “Audrey II” after his dishy (if somewhat ditzy) blonde coworker in the titular shop, that he’s been harboring a secret crush on. Problem is (–and aren’t there always a few–) he quickly learns that this over-sized rapacious rose-bush matures and metastasizes into a jive talkin’, R&B-singing, carnivore who promises to elevate this hapless zero into a would-be hero complete with fame and fortune unending—provided, that is, he keeps on feeding it a steady supply of human blood (“Must be fresh” it commands him.) Over time, though, Seymour uncovers “Audrey II’s” true, out-of-this-world origins and intent, which is essentially to devour the entire world—one garden at a time! “You’ve got no alternative, Seymour Old Boy,” he chides himself upon this grisly realization, “though it means you’ll be broke again and unemployed—it’s the only solution and can’t be avoided: The Vegetable MUST be destroyed!” The results are a devilishly delectable Sci-fi smash that has become one of the longest-running hits ever to take a bite out of Off-Broadway theater!

“Tell me this feeling lasts ‘til forever—tell me that bad times are clean, washed away!” Andrea Hardwick as “Audrey” realizes that “Suddenly Seymour” (Scott Leslie) has shown her “She Can!”

Directed by “One More Productions” Co-Founder Damien Lorton, the pace is kept lively—and he cleverly shakes things up here and there, bringing a fresh slant or imaginative re-envisioning to many of the story’s elements while always staying faithful to the show’s original spirit. The key word here is “fun”—this particular show was, from it’s very inception, designed to be light-hearted, and happily this production lives up to that laudable standard in spades—throwing in plenty of simple (albeit indubitably “daffy”) geniality as well. Another significant point is that all the characterizations presented, while being rooted in broad comedy, possess at least some spark of believability to them, meaning (perhaps man-eating plants from outer-space aside) none are so “over the top” that we as the audience can’t relate on some level to them. Moreover, seeing as all of the plot’s ‘darker’ elements are played strictly for laughs–frequently within a song, sight-gag or production number, this for the most part, makes any of the ‘horrors’ depicted fairly “kid” friendly.

“It’s just a daydream of mine. A little development I dream of just off the Interstate. Not fancy like ‘Levittown—just a little street in a little suburb, far, far from urban skid-row!” Andrea Hardwick as “Audrey” pines for “Somewhere That’s Green”

Shauna Bradford-Martinez’s old-school “with-it” choreography packs practically every number with popular steps of the era that could have actually been spied on the dance-floors of such youth-oriented TV programs as “Hullabaloo” or “The Real Don Steele Show”. Such astute touches add a nice pop-culture authenticity to most of the musical interludes. Indeed, Lorton and Bradford’s combined staging expertly manages to make this small cast seem much larger. Never is this more apparent than during “Skid Row” which ranks as the first bona-fide ‘bulls-eye” of the evening, drawing together the entire cast to bemoan the poverty and privation of living life “on the wrong side of the tracks”. Likewise “Closed For Renovations” is another winning group endeavor as the company—literally—“straighten up” the set now that “Audrey II’s” popularity has the little shop crawling with sudden success. Act Two continues this theme with the post-intermission curtain-raiser “Call Back In The Morning” wherein we find that the plant has reached an alarming size (and has now sprouted some immense–and disturbingly sharp–teeth!)

Both leads have rich, expressive voices that help to make their “story telling” songs or plot numbers (of which there are a surprising abundance of) all the more impactful, and both bring a nice empathetic quality to their roles. Taking her look from Screen-Queen Mamie Van Doren, Andrea Hardwick’s “Audrey” sports plenty of tight leopard-print dresses and stiletto heels all under a bushy blonde ‘do’. It’s the inner-life she conveys however, that makes this character so appealing, lending her iconic solo “Somewhere That’s Green” a nice vulnerability as Audrey, in her own way, dreams of a better life “far, far, from urban skid-row.” As our hero at the center of all the happenings, Scott Leslie’s “Seymour Krelborn” isn’t so much your standard “nerd” or “dweeb” as he is more a wholesome sort of regular Joe who’s just down on his luck, recalling instead the likes of a young (slightly “square”) Dean Jones or Russell Nype. This makes it far more plausible when a luscious-looking gal like Audrey eventually falls for him. Add to it, Leslie’s got some seriously creditable vocal and interpretive skills which makes the most of all his numbers, especially “Grow For Me” (in which he discovers the sinister kind of nourishment that his enigmatic plant craves.) Subsequently, both he and Hardwick shine with their contributions to the show’s one “power duet”, “Suddenly Seymour”. 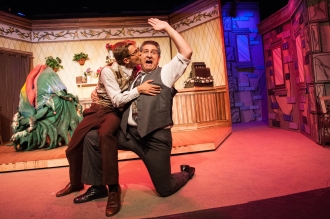 “Kiss me quick and call me Son!” “–Don’t make me sick, just be my son!” Scott Leslie as “Seymour” and Spencer Micetich as “Mr. Mushnik” are “Mushnik And Son”

Delightful support is also rendered by Spencer Micetich as “Mr. Mushnik” , the little shop’s owner. Refreshingly, his take on what has often been portrayed as just another stereotype is alternatively a stronger, more multifaceted and far more vital man–one who’s much more a participant in what’s occurring in his own shop. As with all the other characters, he similarly has his time in the musical spot-light making the most of the tango-infused “Mushnik And Son” when the shopkeeper determines that the best way to keep all that juicy green money Seymour’s responsible for bringing in is by “adopting” the previously barely-tolerated clerk. (“I never liked you much before, but count the cash that’s in the drawer—I’ve got no choice I’m much too poor!”  Mushnik breezes.) Chris Harper also does yeoman work—pulling double, triple and even quadruple duty: first as Audrey’s abusive, “semi-sadist” boyfriend, “Dr. Orin Scrivello–D.D.S.” (“I am a NICE GUY!” he insists.) A dentist who “gets off on the pain he inflicts”, he gasses himself “to a palpable stupor” before performing any extractions while leaving his patients fully alert (“When I start extracting those molars” he croons, “you girls will be screaming like holy-rollers!”) Later Harper reappears as a quartet of business people—all with offers aimed at capitalizing on “this wonderful plant”, including William Morris Agent ‘Skip Snip” (“You’re pleased to meet me, the pleasure is yours!” he informs Seymour) and even “Mrs. Luce” (“I’m sure you know me—the Editor’s wife; we want your face on the cover of the December third issue of ‘Life’!”) Zack Martinez too, hits a humor-filled homer with his dual roles as a local “Skid-row” denizen, then again as a “Pinky Lee-esque” customer who initially brings to light the fascination of “Audrey II”, motivating the shop to put it in the window.

“Oh, the gas isn’t for you, Seymour—it’s for me. I want to really enjoy this and I find that a little giggle-gas before we begin increases MY pleasure enormously.” Chris Harper as Dentist “Orin Scrivello” makes a fatal decision as Scott Leslie as “Seymour” awaits his fate

Guiding all the goings-on along are Fiona Wynder as “Crystal”, Emma Chassey as “Chiffon” and Erika Baldwin as “Ronette”. Each is a genuinely gifted singer and the three comprise a cross between a mini “Greek chorus” and a sixties-style “Girl Group” worthy of “The Ed Sullivan Show”. Harmonically commenting on the action as well as active participants in it, they’re also pretty terrific “quick change artists”–repeatedly being called upon to perform some rapid costume changes—often within the same number—adding to the “heightened” reality of the events unfolding. While admittedly having a look more in common with “The Angels” or “The Shangri-La’s” as opposed to “The Marvelettes” or “The Shirelles”, they unequivocally impress all through the show. Starting with the rousing title number, the trio’s triumphs continue to mount, from the hoppin’-boppin’ “Da-Doo” (which explains Audrey II’s mysterious “arrival”) and the celebratory “Ya Never Know”, to the rollicking “The Meek Shall Inherit” (–the most extensive musicalized sequence that reveals Seymour wistfully pondering the offers for his future if they mean “doing bloody awful, evil things” to keep “Twoey” thriving.) Lastly, they add thrill and intensity leading the “Finale Ultimo” ominously titled “Don’t Feed The Plants”.

Puppeteers Art Vega and Amber Reeder (both arrayed with considerable experience care of “The Muppets” and “The Walt Disney Company” respectively) put their substantial ‘know how’ to excellent use here, imbuing “Audrey II” (in all its various sizes) with an electrifying personality all its own! Add to their work, Jaysen Robbins’ brilliant voice characterization (once the plant essentially “grows up” making its abilities–including the capacity to talk, move–and scheme—known) and “Audrey II” really can be regarded as the show’s “break-out” star. Rest assured, when this “Audrey” starts speaking—and singing—it’s definitely worth waiting for! Wally Huntoon’s vibrantly colored comic-book inspired sets also rate among the very best (and certainly most animated) “The Gem” has featured all season, effectively recalling those irresistibly lurid pulp magazines so popular in the ’50s and ‘60s. Larry Watts’ equally vivacious period-authentic costumes (–and boy, are there plenty of them–) perfectly compliment this ‘overall” comic-book feel while never being so ‘outrageous’ or ‘cartoony’ as to raise any doubt about their veracity or “correctness” for those wearing them. 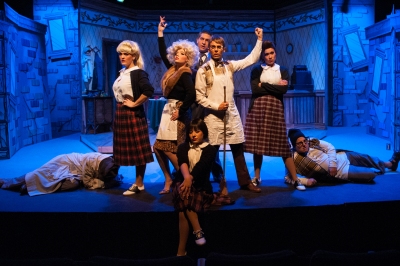 “People tell me there’s not a way outa Skid-but believe me you gotta get OUTA Skid-Row!” The Cast Of “One More Productions” “Little Shop Of Horrors”

So ‘look out! Here comes ‘Audrey Two’! (Trust us—folks are ‘dying’ to meet her!) Having officially opened on Saturday, October 10th, “Little Shop Of Horrors” will play through Sunday, November 1st 2015. Show-times are Thursday, Friday and Saturday evenings at 8:00 PM, with Sunday matinees at 2:00 PM (Note: there will also be an added performance on Saturday, October 24th’ at 2:00 PM.) “The Gem” is located at 12852 on historic “Main Street” in Garden Grove, California. Tickets may be obtained by calling (714) 741-9550 x 221; on-line at: https://tickets.onemoreproductions.com , or in-person at the theater box-office two hours before curtain. (Child and Senior discounts are available for all performances, while special “Student Rush” discounts are also offered for Thursday and Friday performances.)

2 thoughts on “Entertainment That Grows On You: One More Productions’ “Little Shop Of Horrors” Is An Out-Of-This-World Musical Comedy Banquet!”