Both the direction and choreography combine to furnish this production with plenty of pleasant surprises where you least expect them. In fact, Director Lorton has accomplished the enviable feat of striking the delicate balance twixt staying true to the source material–and its original spirit, while mixing things up just enough to keep the show fresh and fairly undated. ‘Front Orchestra and Balcony—what they’ve got, you’ll want to see!’

“Hello Twelve, Hello Thirteen—Hello Live Audiences!” That’s what “One More Productions”, the plucky theater company housed at the landmark “Gem Theater” in Garden Grove California, are saying once more with their staging of the classic musical “A Chorus Line”!  The second “live” production in their 2021-22 season, the production is directed by OMP Co-founder Damien Lorton (who also serves as Musical Director,) while the frequently stunning choreography is by Shauna Bradford, Alan Collins, Heather Holt Smith and Kady Lawson. 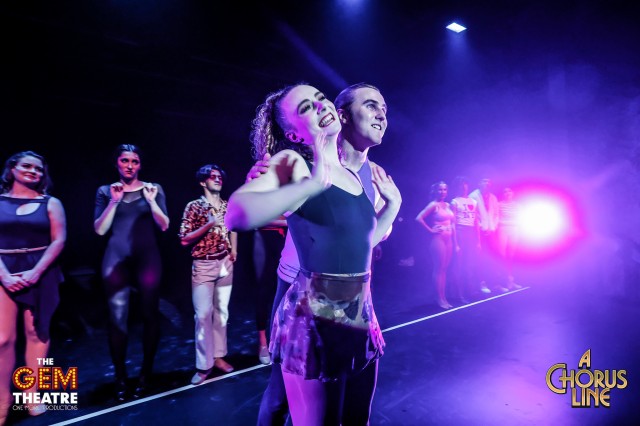 Race Chambers (who serves as an assistant to the Choreographers) and Kady Lawson (who also serves as one of the production’s Co-Choreographers) also present a refreshingly believable, affectionate pair of young newlyweds as “Al Deluca” and his bride “Kristine”, who also demonstrate a few absolutely dynamic ballet lifts performed center stage at the climax of “Hello, Twelve, Hello Thirteen, Hello Love”. Lawson also shrewdly steers clear of painting “Kristine” as “a crazy ding-a-ling”, instead leaning more towards essentially being young and a bit overwhelmed to be a part of such an important audition. This, in turn, lets us all in on the joke—and easily ‘wins us over’ to her and her husband’s ‘side’ during their clever and smile-inducing duet, “Sing”. Not to be overlooked either is Iva Erwin’s “Connie”—the “5’ 10” Peanut On Pointe” who is loaded with a forthright charm and charisma. Into the mix, Lorton has also re-imagined several of his protagonists—among them, Edvan Galvain’s ‘take’ on “Don”, which exhilaratingly re-envisions this ostensibly ‘subsidiary figure’ from ‘Kansas City’ into a more streetwise Latino from ‘Mexico City’, which gives him a whole new resonance within the larger narrative.  In the same regard, the far too repeatedly marginalized role of Assistant Choreographer, “Larry” (who pretty much maintains order on-stage while keeping the audition running smoothly,) has also been ‘re-defined’ with a change of gender into “Lola”, and the modification correspondingly gives Angela Mattern’s depiction of her a deeper implication and timbre. Just her basic attitude (especially when “Cassie” is around,) reveals all the unspoken history she may share with Zach in her own right. Moreover, as “Judy Turner”, Lexi Cross similarly transforms this more-or-less ‘supporting character—who at one point refers to herself as “the skinny redhead second from the left” into a truly vivacious and flirtatious personality (“Oh, and I was born in El Paso—that’s El Paso Texas!” she tells us with a gleaming grin.) 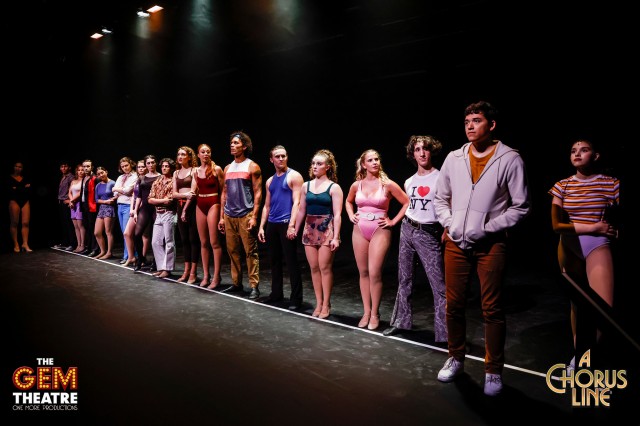 “See, when I quit school what I was doing was trying to find out who I was and how to be a man…You know, there are a lot of people in this world who don’t know how to be men, and since then I found out that I am one. I was looking for the wrong thing. I was trying to learn how to be ‘butch’…Any way, I started hanging around Seventy-Second Street meeting all these strange people; Just trying to make friends that were like me…” Andrew Cano as “Paul San Marco” explains how (and why) he tumbled into a life in Dance in One More Productions’ 2021 Staging of “A Chorus Line”

For a show that’s ostensibly played out a on a plain stage, (with an array of reflective mirrored panels at the back,) there are some technical elements which nonetheless add immensely to the general ambience. John Hyrkas’ vibrant lighting designs could, in effect, be considered the show’s fundamental “Set” –such as the way the light bathes “Kristine” in a strident green hue with every off-key note she hits, or how “Val” is surrounded in a haze of sultry red lights on one side, blue on the other in the midst of her chanson, “Dance Ten, Looks Three”.  In the same sense, Luis Cornejo’s costumes correspondingly bestow a different—but still spot-on accurate—reflection of mid-1970’s dance and audition attire, before culminating in an equally refreshing interpretation of the classic “Gold” Lamé top hats and tuxedos in the finale. 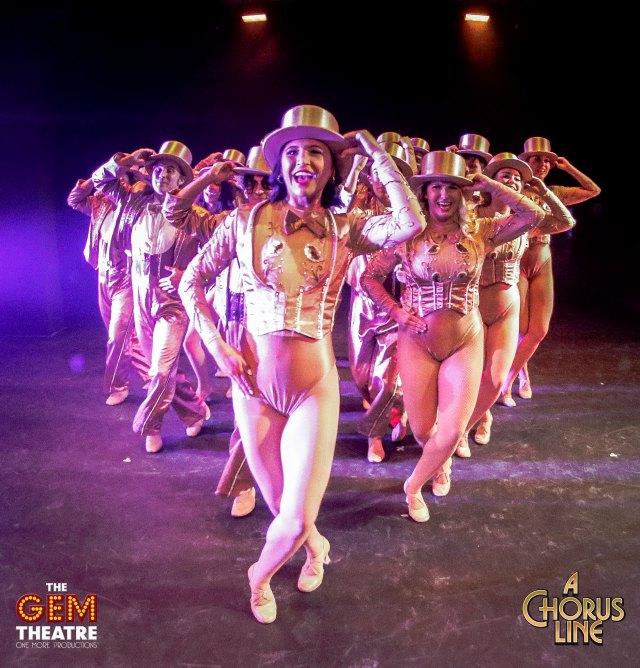 “She walks into a room, and you know you must shuffle along, join the parade—she’s the quintessence of ‘making the grade’! This is what you call travelling—Oh, strut your stuff! Can’t get enough…” Angela Mattern as “Lola” the Assistant Chorographer is looking fine, leading the line in One More Productions’ 2021 Staging of “A Chorus Line”

‘Front Orchestra and Balcony—what they’ve got, you’ll want to see!’ Having officially opened on Saturday, September 11th, “A Chorus Line” will run through Sunday, October 3rd, 2021, at “The Gem Theatre”– located at 12852 Main Street in Garden Grove, CA.  Show-times are Thursday, Friday and Saturday evenings at 8:00 PM, with Sunday Matinees at 2:00 PM; with two Saturday matinees on September 18th and 25th at 2:00 PM. Tickets may be obtained by calling “One More Productions” at (714) 741-9550, ext. 221, by logging onto: www.onemoreproductions.com , or visiting the “Gem Theater” box-office in person on Tuesdays and Thursdays between the hours of 2:00 PM and 6:00 PM .  Special discounts for Seniors (60+) and Children (12 and under) are available, while “Student Rush” tickets are also being offered for certain Thursday and Friday evening performances. 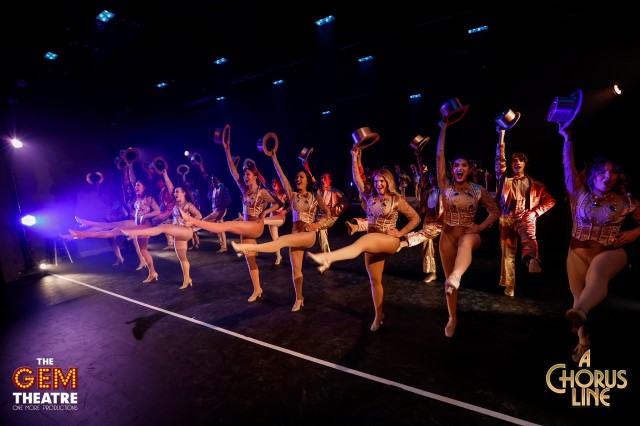 “One! Singular Sensation! Every little step they take; One! Thrilling combination, every move that they make! One smile and suddenly nobody else will do—you know you’ll never be lonely with you know who…” The entire company celebrate being part of “One Singular Sensation” in One More Productions’ 2021 Staging of “A Chorus Line”