Deluxe, De-lovely, Delightful: The Roundabout’s Revival of “Anything Goes” Is ‘So Easy To Love’ At L.A.’s Ahmanson Theater

Marshall‘s direction is paced constant but not so frenetic that it compromises any part of the whimsical voyage Porter and company are taking us on, meaning every witticism and bit of stage business gets its full due.

“In olden days” (1934 actually,) songwriter Cole Porter along with librettists Guy Bolton and P.G. Wodehouse created a tune-filled tale surrounding a luxury liner called “The American”, peopled with eccentric characters–rich, poor, famous and infamous (–and sometimes both!) Practically every song presented has come to embody just how exceptional Theatre Music can be. Now, the Roundabout Theater Company’s Tony-Award Winning Re-envisioning of this masterpiece of the American Musical Theater has dropped anchor at The Ahmanson Theater In Los Angeles CA. 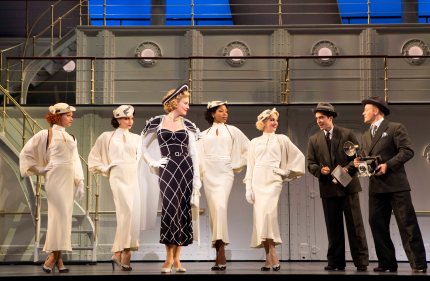 Arguably among the most famous madcap musical-farces ever, right from the get-go we’re introduced to young Wall Street whiz-kid Billy Crocker and New York‘s “Most Notorious Evangelist“ Reno Sweeney in a smoky Manhattan dive (the only scene to not take place shipboard) This Reno dame is one sultry cookie as she launches into the iconic “I Get A Kick Out Of You” for Billy who’s hopelessly love-sick for Park Avenue Debutante Hope Harcourt. There have been few better ways to start a show than with Porter’s powerful crowd-pleaser (–is it any wonder that it includes a built-in encore?) Trouble is, Hope’s about to set sail for England with her titled finance, so the two chart a course that will help Billy win the object of  his affection by the time the final curtain falls. 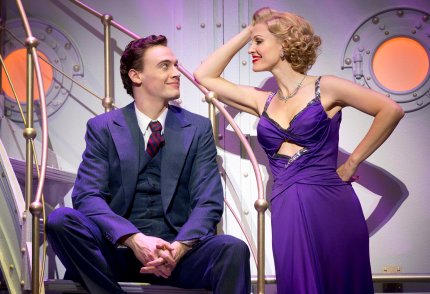 “I hate parading my serenading as I’ll probably miss a bar, but if this ditty is not so pretty, at least it’ll tell you how great you are.” Rachel York as Reno let’s Erich Bergen as Billy know he’s “The Top”

Directed and Choreographed by Kathleen Marshall, this new version serves up comedy in comparable portions to those classic tunes and eye-popping choreography lest any one element overshadow any other. This is what makes the Roundabout’s staging such a complete winner. Marshall‘s direction is paced constant but not so frenetic that it compromises any part of the whimsical voyage Porter and company are taking us on, meaning every witticism and bit of stage business gets its full due. The new book by John Weidman and Timothy Crouse (whose father, Russell likewise collaborated on the original with Howard Lindsay, once Bolton and Wodehouse became unavailable,) keeps all the best lines and situations while adding still more gags and physical comedy. There’s even a few subtle satirical references such as when one annoyed socialite complains “Next time, I’m booking with Cunard!”(referring to the shipping line that in the early 1930‘s, bought up the same one responsible for “The Titanic”.) All the nice or naughty nautical goings-on are played out against Derek McLane’s spiffy tri-level, ivory-white set, which gives rise to some truly innovative multi-level staging and choreography, apropos to the many stunning production numbers the show has become famous for. However, whenever a splash of color is called for (as it does frequently,) Howell Binkley’s mood-appropriate multi-hued lighting comes in to play. 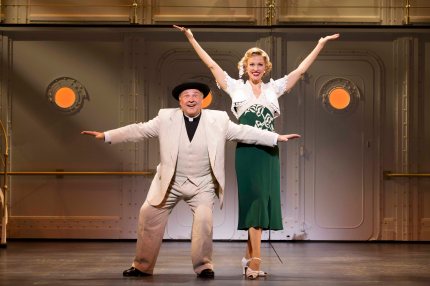 “When other friendships have been ‘forgate’–ours will still be Great!” Rachel York as Reno Sweeney with Fred Applegate as her ‘old pal “Moonface Martin’

Whether they’re sending off  the “S.S. American” in the jaunty “There’s No Cure Like  Travel” or shifting things into harmonic high-gear with the raucous “Blow, Gabriel Blow“, everyone involved is full-fathom fabulous giving it their finest! Conversely, the simple sailors’ shanty, “There Will Always Be A Lady Fair” (sung by a quartet of sailors,) provides a pleasant interlude between such spirited extravaganzas. The long-celebrated title number takes place at the close of Act One when Billy is not only discovered as a stow-away, but is thought to be none-other than “Snake-Eyes Johnson”–the renowned “Public Enemy Number One“. After the familiar cadence of those introductory notes are heard, Marshall’s  distinctive  choreography introduces a unique kind of step best described as a sailor’s horn-pipe infused with a series of sharp, quick ‘nerve taps‘. This develops into a rousing ‘contest’ led by Reno and her enticing “Angels” (’Purity‘, ’Charity’, ’Chastity’ and ’Virtue’,) and before you know it, crew and passengers alike are all ‘hoofing away’ in unison as they build toward a bona-fide, unadulterated show-stopper!

“I want to join your Happy Band and play all day in the promised land, so Blow, Gabriel, Blow!” (The cast of The Roundabout Theatre Company’s “Anything Goes” )

As the “Sensuous Sermonizer” Reno Sweeney, Rachel York completely commands the stage, selling each song with genuine pizzazz! Although it would indeed be factual to state her performance here alone could be reason enough to buy a ticket, the same could be said of any of this energetic and gifted group! Suffice it to say instead, Ms. York is like a big blonde bow on top of this hugely entertaining holiday package. Her breezy but polished delivery delightfully captures the essence of all those great old “Screwball Comedy” heroines like Carol Lombard or Irene Dunne, easily making “Reno” Her role.

“All through the night from a height far above, you and your love bring me ecstasy…” While in the ship’s Brig, Erich Bergen as Billy Crocker dreams of Hope Harcourt (Alex Finke)

Erich Bergen as Billy Crocker himself, has some pretty potent vocal chops as he demonstrates starting with his half of the unforgettable duet, “You‘re The Top”. A triple threat mix of Ben Stiller, Dick Powell and a young Jimmy Stewart, he too does a superlative job. Meanwhile as Hope, Alex Finke delightfully navigates one of the trickiest roles ever written for a musical. Right up until the finale she must try to rebuff  Billy’s advances, (she is betrothed after all,) while still managing to remain likeable. Happily, Ms. Finke does exactly that–making us aware with every step and long last look that it’s clearly Crocker she’s dreaming of! She’s a first-class ingénue with a particularly expressive voice and shines in her solo, “Goodbye, Little Dream, Goodbye”; yet the on-stage magic really begins when she’s cutting-loose opposite Bergen. Then, Hope becomes the demure Ginger Rogers to Billy’s suave Fred Astaire, and several times they gracefully ’trip the light fantastic’ as during “You‘d Be So Easy To Love“. Moreover, despite its zany set up (in which Billy sneaks on deck disguised as a veiled old woman in a wheelchair,) “It’s De-Lovely” also turns out to be a ‘De-lovely’ example of the best of both song and dance this duo can– and most certainly do–achieve!

“…At that moment supreme will be shown the ‘Gypsy In Me'”: Sir Evelyn Oakleigh (Edward Staudenmayer) confesses his feelings toward Reno (Rachel York)

As Hope’s ‘intended’, the slightly bemused British Aristocrat Sir Evelyn Oakleigh, Edward Staudenmayer demonstrates a masterful touch in regards to all the slapstick and word-puns the role requires; but he especially stands out with the sizzling tango “The Gypsy In My Soul” in which he and the scintillating Miss Sweeney convey their growing attraction toward one another (or as he calls it, “getting ‘Hot Pants‘ ”.)  Fred Applegate, who steps into the role of  “Moonface Martin” (a.k.a “Public Enemy Number 13”,) along with Joyce Chittick as his brassy side-kick “Erma”, are each spot-on too. Applegate has a pristine comic technique and offers a more authentic (hence more likable) portrayal of the would-be gangster than has been seen in previous revivals. His second act ode, “Be Like The Blue-Bird” (’imparted’ after he and Billy have been tossed into the brig,) features some prime “Vaudeville” inspired shtick opposite a blue-spotlight that’s worthy of an ovation of its own.  Chittick is equally terrific belting-out  Erma’s saucy “Eleven O’clock Number”, “Buddy Beware”.  Backed by a group of  adoring shipmates,  she cautions them: “Your devotion I prize, but you must realize, my boys, other girls’ luxuries are my necessities!” Vincent Rodriguez III  and Marcus Shane, as the “Asian Converts” Luke and John respectively, also deserve special mention. Together, they capably turn what could have been a rather dated one-note gag into a collection of thoroughly funny little episodes.

“During Christmas Holidays, I develop taking ways; and I’m not at all ‘Anti’ pretty things ‘Santy’ brings from ‘Cartier’s’ “: Joyce Chittick as ‘Erma” and her ‘admirers’

So, what if “The world has gone Mad today, and Good’s Bad today, and Black’s White today and Day’s Night today?!” Pipe aboard  the Ahmanson Theater and weigh in for a magnificent time! Having opened on Wednesday November 28, “Anything Goes” will run though January 6th, 2013; Tickets are available by calling (213) 972-4400, online at  www.CenterTheatreGroup.org, or in person at the Center Theatre Group box-office at the Ahmanson Theatre located at the Music Center, 135 N. Grand Avenue in Downtown L.A.

“They think he’s ‘Gangster Number One’ so they’ve made him their favorite son and that goes to show’–‘”Anything Goes”!” Erich Bergen as Billy Crocker with Fred Applegate as “Moonface Martin” (with “Angels”– ‘Charity’, “Purity’, ‘Chastity’ and ‘Virtue’)

Photos by Joan Marcus; Courtesy of “The Center Theatre Group” (www.CenterTheatreGroup.org ) Special Thanks to Nancy Hereford, Jason Martin, Shannon Smith and everyone at the Center Theatre Group at the Los Angeles Music Center, and to the cast and crew of The Roundabout Theatre’s Tony-Award Winning Revival of “Anything Goes” for making this story possible.